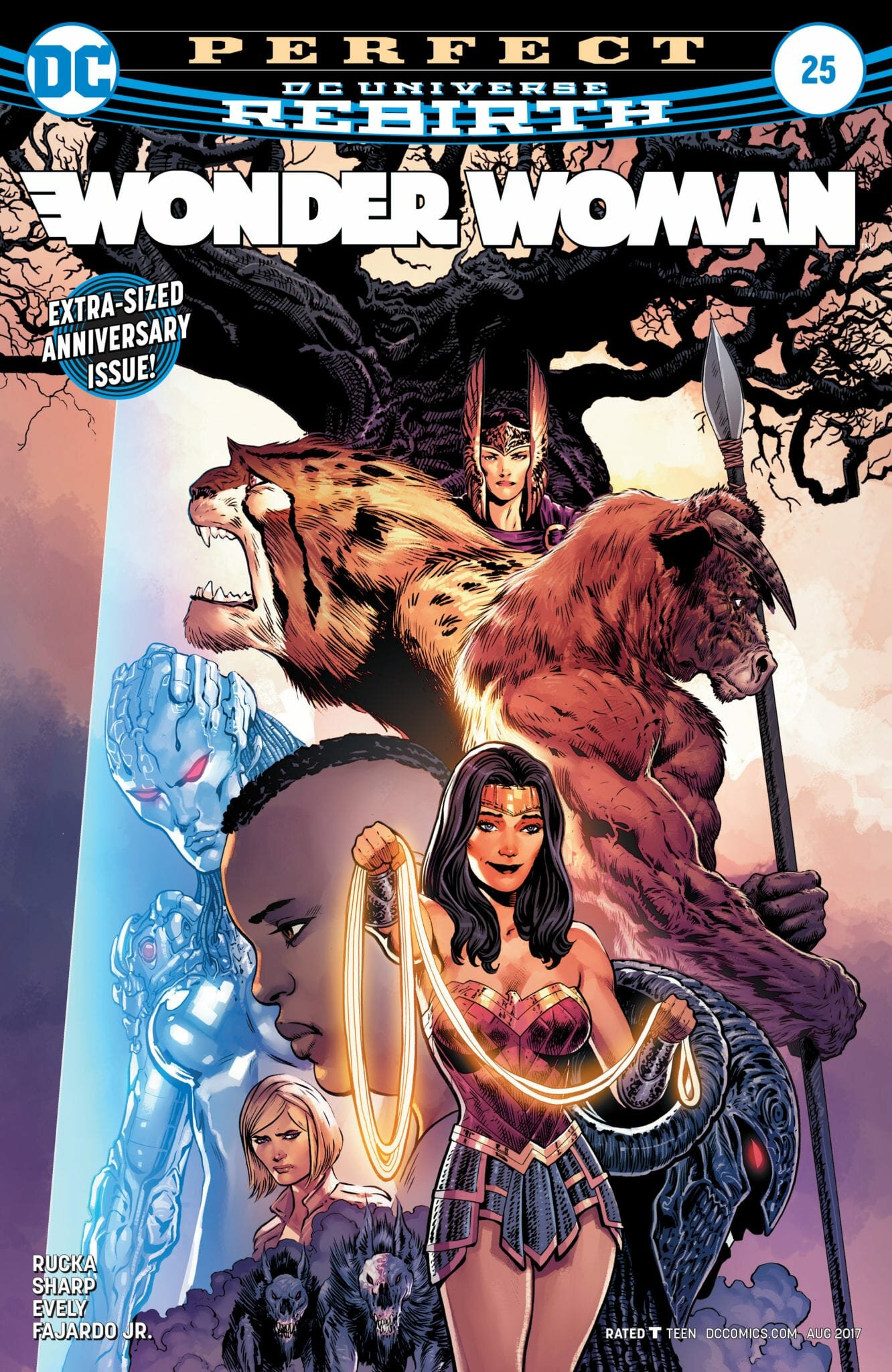 In this extra-length anniversary issue, we see the resolution of several storylines and the start of a new chapter in Diana’s life. Lies are confronted, truths are revealed, and some hard realities are faced. This issue also closes the chapter on the current creative team’s run, giving both Wonder Woman and her storytellers a proper send off.

Where we were: Last issue gave us the epilogue of Godwatch and continues #23’s conclusion to the “Truth” storyline.  The quest to liberate or kill Ares has failed, Deimos and Phobos are contained, bound by Diana’s perfect. Doctor Cale’s daughter Izzy must remain on Themyscira in order to remain whole, ending Veronica Cale’s quest, but not her rage. Diana has learned it was the Patrons that allowed her to think she had discovered the way back to Themyscira so that the path to to the island (and Ares’s prison) would remain hidden to all. Barbara Minerva is Cheetah once more. Minerva has embraced her new existence as Cheetah, and, having been denied her lifelong dream of finding Themyscira, now declares herself a new god set to wreak vengeance on gods and mortals alike. She attempted to kill Vale and ensure she can never be returned to normal, but was captured by Diana in the process.

Where we are: There is a lot of heavy lifting in this book as an extra length anniversary issue, the end of several major arcs, as well as the departure of the creative team that has seen Wonder Woman through her rebirth. We open with Diana and the Justice League containing a threat in the Sahara, albeit without her characteristic joviality or her golden lasso. After a curt exchange, Diana departs and we check in with the other players. Cale and Cyber are under investigation but seem to have managed to cover their tracks and avoid any legal entanglements. We learn from a confrontation with Cale that Cheetah has escaped, and we also learn that while Cale has ended her quest for Ares, she has not forgiven Diana for what has happened to Izzy.

Sasha is back to work, though it’s not entirely clear how being held captive has affected her in the long run. We do see how Minerva’s transformation and being lost forever has affected Etta Candy and the beginnings of a split between Etta and Diana are hinted at. At the same time, Steve Trevor attempts to bring things closer with Diana, though not without some difficulty. And, perhaps as a nod to reality that her home on the island seems to be finally and truly closed to her, Steve arranges for Diana to now have a home of her own.

The thing weighing most heavily on Diana’s mind, though, is the seeming betrayal by the Patrons. Wonder Woman’s core is her belief in her mission and her trust in her friends and the gods, and all of that has been badly damaged throughout the Lies, Truth, and Godwatch. She seeks them out and confronts them regarding their deception. By the end, Diana seems to have rediscovered her purpose and at least made peace with the Patrons.

What does it all mean? This issue packed a lot into a single issue, extra long or not. The current team managed to tie up all of the intertwining storylines, of which there were several, in a satisfactory way, while at the same time leaving a rich field of potential plotlines for the incoming team. The artistic team did a great job balancing the action with the more sedate scenes. The artwork conveyed the intense emotions still broiling among most of our regular players, complementing the story in all the right places. If I were to criticize this issue for one thing, it would be the brevity of Diana’s confrontation with the gods. The fact that the Patrons deceived Diana, regardless of their reasons, is a fairly fundamental problem in Diana’s entire outlook and existence. While she is inclined to trust them, it seemed like that particular scene was a bit rushed, perhaps being sacrificed on the altar of having so many topics to cover.

Overall the issue was a solid capstone to Wonder Woman’s rebirth and a perfect send off from the creative team. Next issue will see the beginning to an exciting chapter in Diana’s life. If it’s anything like what we’ve seen so far, it’s going to be an incredible ride.