In the page of Darkseid War, Lex Luthor defeated Darkseid and gained a Lexbox, a modified motherbox that gives his suit powers and enabled him to be another Superman for Metropolis.

This new story arc begins on the planet Apokolips, where most of it promises to take place. An old blind prophet and a young woman named Ardora stand outside of Darkseid’s now empty castle. They lament the emptiness of the throne, which has caused upheaval throughout Apokolips, and discuss their desire for a tough and authoritative ruler.

Meanwhile, back in Metropolis a classic scene is unfolding. Police officers are in high speed pursuit of a gang of thieves, when not one but two Supermen swoop in to save the day. Lex Luthor and Superman work together to easily handle the common criminals. Lex makes sure to get a photo op before flying off to the top of the LexCorp building downtown. Suddenly, the two new characters from the beginning arrive on Lex’s roof by Boom Tube. Before Lex is even able to speak, a helmet seals itself around Lex’s head, and the three of them all Boom Tube back to Apokolips, claiming that Luthor has a destiny to fulfill.

Lex’s disappearance triggers a fail-safe, and sends a fleet of robots to seek aid. The Kent family is trying to decide what to have for dinner when they are ambushed by the Lexbots. They insist that Superman comes to his aid, but Superman insists that he can’t leave Metropolis unprotected. The robots don’t take this well, and Superman and his son have to fight them off. Before they can dispatch them all, a Boom Tube is created that takes the entire family to Apokolips. The fighting caused the Boom Tube to malfunction, however, and all three are stranded in different parts of the hellish planet!

That helmet that Lex wore looked like a modern version of the Justifier helmets, which controls the wearer with Anti-Life. They’re scary and awesome.

Summary
The standard creative team of Tomasi, Gleason, and Mahnke make a triumphant return with the first issue of what promises to be an explosive story about the Kents on Apokolips and Luthor on the throne. They do a solid job setting up the story and establishing the initial players while still making room for some individual moments. Seeing Lex and Superman work together is almost as cute as seeing the Kent family debate about what to have for dinner, and the issue even has time to showcase Superman and Superboy fighting giant robots.
8
Great 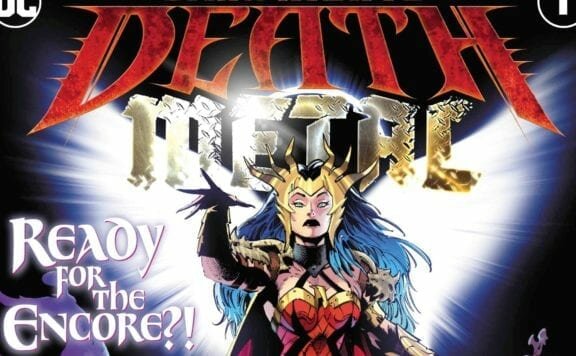