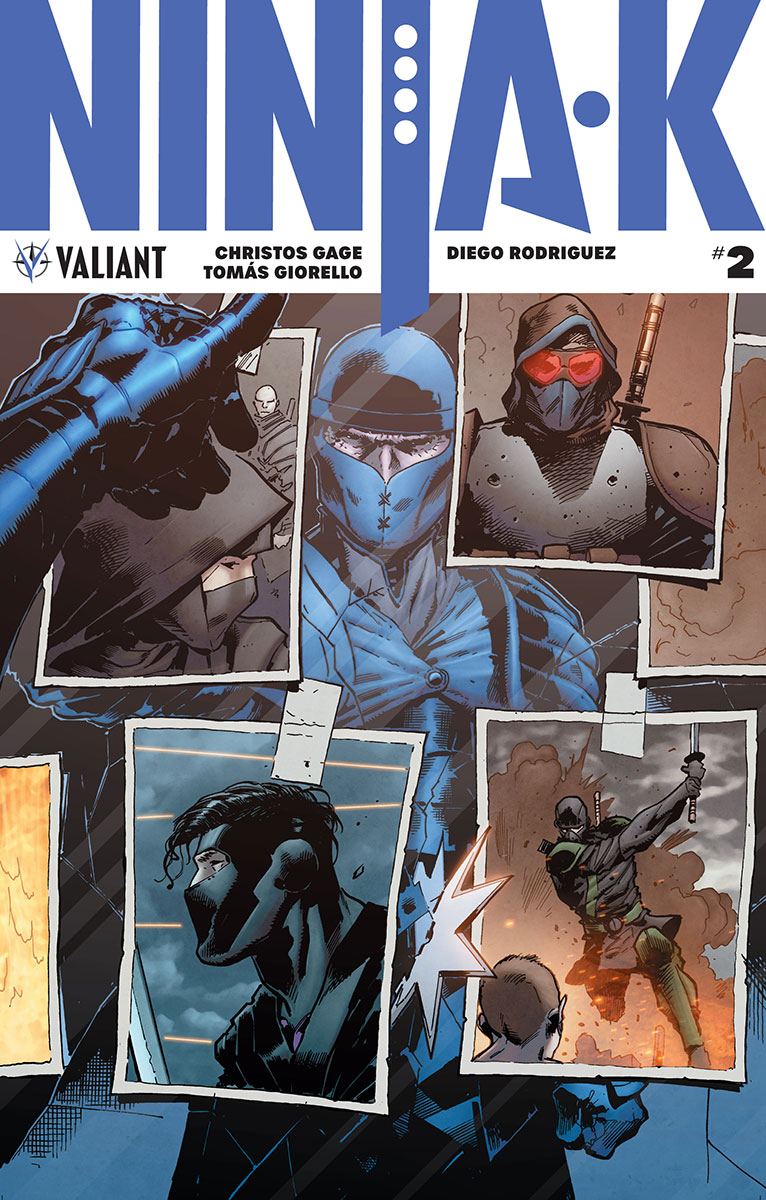 Colin King is Ninja-K, a deadly mercenary who operates within MI-6’s secret Ninja Programme. One of the most successful agents in MI-6’s history, it is said that his actions alone have swayed the course of history on more than one occasion. But the Programme’s history is deep and wide…

Ninja-Ks mentor Ninja-D has been murdered and Ninja-K is trying to track down who it might have been. His trail leads him to Ninja-Ds backup D-3 at his cabin, who isn’t much help, only saying that it might have been related to his post retirement “black bag” work before pulling a gun. Before Ninja-k can disarm or try to get more out of him, an explosion rips through the cabin…

The issue starts off with another flashback,to 1952, to the early days of the Programme where we meet Ninja-C. While he’s as much of a deadly badass as the rest of the Ninja’s we’ve met, he’s becoming disillusioned with the work he does.

Back to the present where we get a good look at all the tech that goes into Ninja-Ks suit, that with some quick thinking help his escape the explosion relatively unscathed. With no other leads he heads out to track down Ninja-Ds mostly enemy/sometimes lover/all the times shapeshifter Madame Charade. What he finds isn’t what we’d expect as it seems the ravages of time have caught up to Madame Charade. Barely able to hold a disguise for a few minutes and a recluse, she’s at the end of her rope. Unfortunately she doesn’t much in the way of clues either, only that it might have been related to his “black bag” work, which she doesn’t know the specifics of. But she does know that he worked out of an old factory in Birmingham for a time. After fighting off a feeble attack,Ninja-K takes off for Birmingham, leaving Madame Charade to her sad seclusion.

Once inside the factory and through the secret entrance to the facility inside (pretty sure a secret entrance in a Ninja requirement), he finds a training facility. With signs of the use of live ammunition, blood stains and dormitories that lock from the outside, Ninja-K is reminded of the facility he trained in. But when he finds the beds on the small side and then a comic, he realizes they were training little kids. Taking orphans and runaways and molding them by any means necessary to be killers, Ninja-K reflects it’s more like torture.  Before he can think too hard about how anybody who survived the training is now a likely suspect, he’s almost snuck up on! And who could sneak up on a Ninja, but another Ninja! Ninja-C apologizes to Ninja-K and prepares for battle!

Bonus after the credits comic: We get a little bonus story at the end following the original Japanese Ninja in WW1 fighting against the Kaiser.

This was a really good issue in what looks to be a great series but most of all the Madame Charade scene was amazing. After hyping her up last issue what we’re presented with isn’t what we were promised. A sad charade (wink wink) of her former self, Madame Charade is on the verge of melting into nothing when we see her. The panels where she attempts to attack Ninja-K are fantastic as her arms melt away. The ravages of time don’t even spare the super powered.

This issue also brings up the question of what it takes to make somebody like Ninja-K. Kidnapping little boys and brutally shaping them into the perfect killers is not something the good guys are usually doing. Ninja-K seems rightfully disgusted with what happened, but with how Ninja-C killed his mentor, I don’t think they’re likely to team up and take out the people who did this. But I hope in the upcoming issues Ninja-K will take vengeance on whoever is responsible.

One thing about this issue/series that I don’t mind too much, but some mind find jarring is the amount of flashbacks and exposition. As somebody who hasn’t really read any Valiant it is nice to catch up on the large amount of backstory that I don’t know, but if you are a Valiant reader who already knows their stuff, it a lot of time taken up to retread stuff you’re already familiar with.

Summary
A good issue with flashbacks, fancy high tech suit action, a fun encounter with an elderly villainess and then setting up for a Ninja showdown!
8
Great

Ever seen an old shapeshifter?(Ninja-K #2 Review)