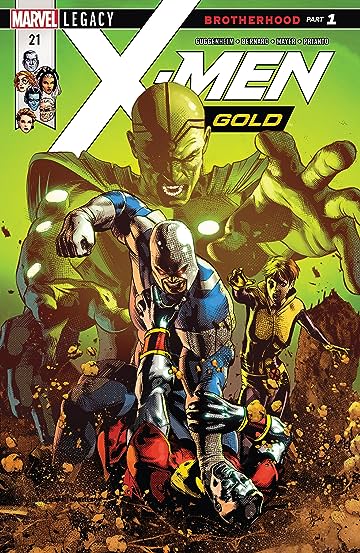 After Kurt and Kitty were taken by an evil space mutant to the negative zone, the rest of the X-Men Gold crew had to go rescue them. The biggest thing to come out of the mission was that Colossus and Kitty are getting married! So the team is recuperating and celebrating, but the X-Men never get to rest for long.

We start with the new Brotherhood of Evil Mutants (Mesmero and a new Pyro and Avalanche) in prison after their meeting with the X-Men back in the first arc of the series, then quickly breaking out of prison. Meanwhile, at the X-Mansion, Ororo catches Old Man Logan trying to sneak off without telling anyone. He basically says “I’m too old for this shit”, and she lets him go. Prestige who has been in a coma since getting blasted by the alien ship that took Kitty and Kurt, is awake, lively and embracing her “hound” look from before she was rescued from the post-apocalyptic future that she came from. Even though she has had trouble dealing with that part of her past(or future) she assures Kurt she’s never felt better.

Sadly, as always, duty calls when the new Brotherhood attack anti-mutant activist Lydia Nance’s party as revenge for hiring them for the mission that sent them to prison. With Logan gone, Amara steps in, mainly because she wants revenge on Mesmero. Kitty is nervous about relying on her or the newly not in a coma, Prestige. Sadly, iit looks like her fears were well founded. How will Kitty and her team fair against enemies that seem to be able to outmaneuver?

A good issue that starts to tie together some threads that have been laid down by previous issues. I only liked the return of The Brotherhood because Mesmero’s story is great right now. Especially with it flashing back to how he recruited new Pyro, and how he and Avalanche broke out of jail. I don’t see why he wants revenge on Nance, however, since he knew he was working for her the whole time. Old Man Logan leaving means we only had to hear him talk about how his healing factor ain’t what it used to be one more time. Considering he’s in the Weapon X and Astonishing X-Men series as well, he could use the rest.

I’m hoping the Prestige storyline gets cleared up in the next couple issues and maybe explain why she popped out of bed and just decided to start embracing a part of her past she’d been trying to escape for basically her entire history. Because responding “I feel so much more now” when Kurt brings up that he’s concerned about you almost getting killed twice doesn’t tell me anything. But with a rumored name change in the works for Prestige I’m sure it’ll all get worked out. However despite some complaints about the story, it was still entertaining, and the art in this issue was on point.

Once again another solid, though not spectacular, classic feeling issue from X-Men Gold.

Summary
Colossus and Kitty are getting married! With the story-line progressing quickly, what will come of the battle between Kitty's team and The Brotherhood? How is Prestige working through her entire character arc's angst so easily?
Good
Bad
7
Good

Brotherhood is Back in Town(X-Men Gold #21 Review)