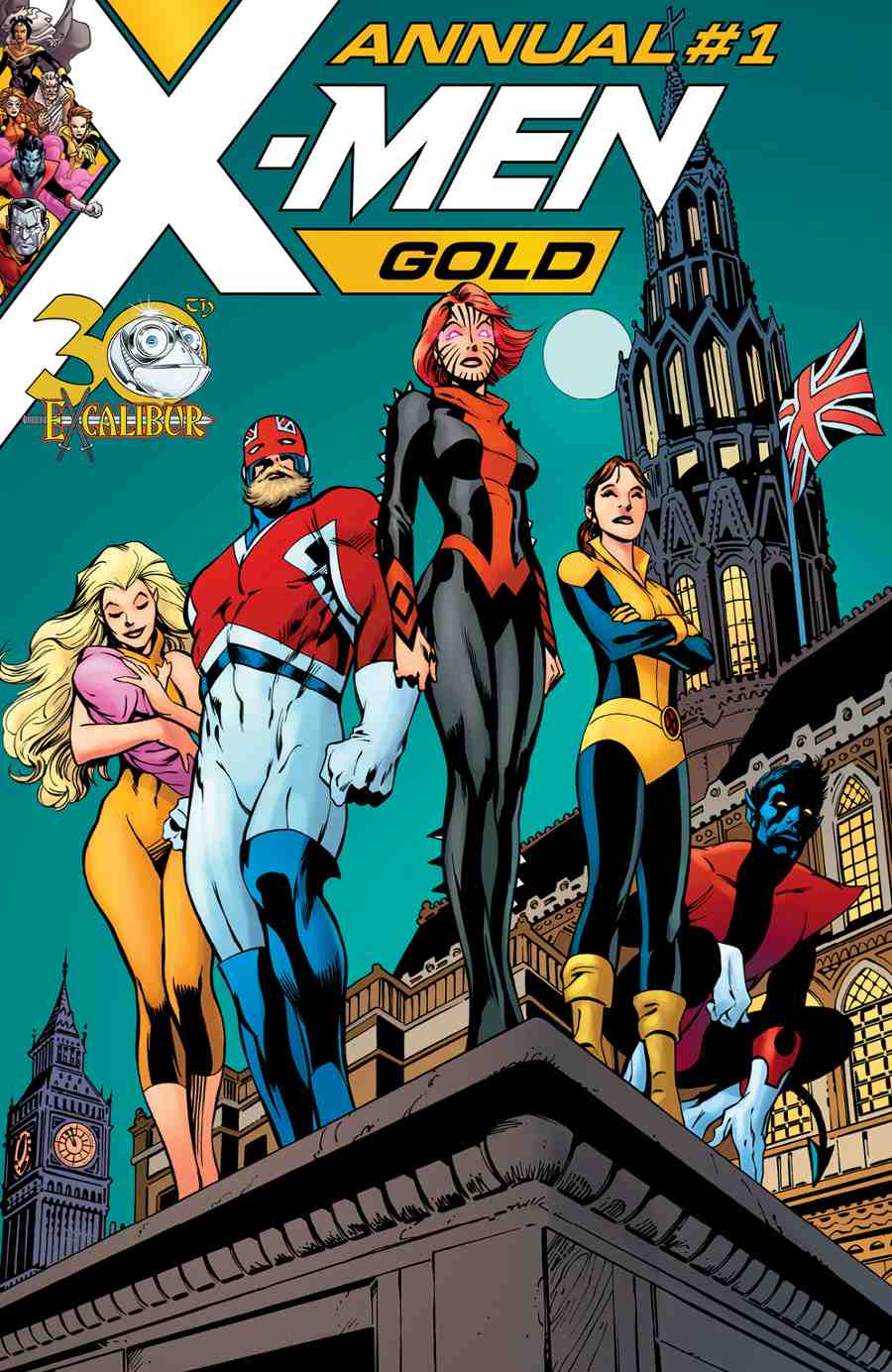 Way back in the 80’s with all the time travel, space travel and alternate timelines, it was a chaotic time to be one of the X-Men. At one point Kitty, Nightcrawler and Rachel Grey/Summers thought the rest of the X-Men were dead, so they joined up with Captain Britain(Brian Braddock) and Meggan to form team EXCALIBUR where they kept the UK safe from mutant and other superhuman threats. Eventually, the three X-Men moved back to America and Brian and Meggan settled in to life together.

We start off with a stork delivering a message to Kitty, prompting Logan to joke about why Kitty and Peter finally decided to get engaged, to everyone but Kitty’s delight.  But it turns out that it’s a message from Meggan Braddock who married Captain Britain and just had a baby! So she’s invited all her old Excalibur teammates to come visit them in England. So Kitty, Kurt and Rachael are flying off (commercial of course) to England!

They soon reunite the team at the lighthouse and meet Maggie, Meggan and Brian’s super-smart talking baby. While Kurt talks philosophy with a baby, Kitty and Rachael help reassure Meggan who is a bit freaked out that her baby is probably already smarter than her. However, because they’re X-Men, their peaceful reunion is ruined; they are attacked by a survivor of D’Bari (the planet Jean Grey blew up as Dark Phoenix) looking for revenge. Team Excalibur, with the help from a hyper-intelligent baby, is enough to quickly put an end to it, and make sure that even the guy who attacks them goes away happy. Once the peace and quiet resumes, Meggan reveals the real reason she asked them out here… to have all three of them be Maggie’s Godparents! Touching moment when they accept happily.

The second story was about a girl who is Storm’s biggest fan and her aunt. They go on a crazy trek around the city together in a quest to find Storm. Unfortunately for them, they are always one step behind the X-Men’s trail of destruction. They’re losing hope that they will see her at all. However, just before the girl gives up and has to leave NYC, a chance encounter gives her the best photograph of her life!

A solid annual that gives us two great little self contained stories. Reuniting Excalibur was a great move considering most of the roster is already on the Gold team. It was fantastic seeing them fly commercial. The talking baby was hilarious, even though it has been done before in many Marvel comics. It was well done. The way the villain was taken care of was very well done as well.

The second story was very cute, and I really liked it. I always like seeing the X-Men from the person on the street perspective, and the girl chasing Storm around and gushing about her to the aunt was adorable. The sweetness I enjoyed aside, there was an absolutely ATROCIOUS line in there that I can’t get over. I know it can be tough to be relate to kids these days Marvel, but nobody in the history of the world, has ever said “I’ll be back, back back like Flo Rida’s hairline”. I cringed so hard reading that line, but the rest of the story was still good.

The one thing I don’t understand is the timing of the release for this. It’s set between issues #22 and #23, but was released before issue #20 was even out, and it revealed that Kitty and Peter were engaged, which was supposed to be the BIG TWIST! of issue #20. I don’t know why you would put out a book that spoils what is supposed to be a big reveal. There were other smaller things revealed too, like Prestige waking up and getting a hound-like makeover, and in issue #21 Old Man Logan “leaves”, yet here he is in between issues #22 and #23 hanging out. Still a fantastic annual, but these little things puzzle me. Then again, this is Marvel.

Summary
A fantastic standalone issue that with an Excalibur reunion and a on the street fan perspective of the X-Men. Both will be highly enjoyable to any X-Men fans. The annual covers a surprising reveal for Meggan and Brian!
Good
Bad
9
Amazing

Breaking the Bands of Death (Hunt for Wolverine #1 Comic Book Review)
May 9, 2018