The Shoot The Breeze team is excited to bring you another interview!

I was honored to sit down and chat with legendary writer Gail Simone about her new Plastic Man title for DC Comics.

Ian: What is your background with Plastic Man?

GS: Just that I always loved him, as a reader. I liked him no matter where he appeared, he always seemed to be a little subversive, and I was always attracted to the characters that had a bit of sly whimsy.  I loved the sense of fun, but that it was grounded in the criminal background of Eel O’Brian.

Ian: Plastic Man is a comedy-driven miniseries, what would you say are some of your biggest influences with the tone of Plastic Man?

GS: I’m not sure I have a lot of influences for Plas’s tone, really. We’re trying for a new vibe. It’s definitely got some of the other classic runs as influence, I love Kyle Baker to pieces, for example. But I would have to say we are mostly just updating the classic Jack Cole version. I feel it’s never really been topped. The criminal background, the casual but perfect visual gags. It’s more something to aspire to touch than something I would say is an influence. It’s just so perfectly realized! Ian: What were some of your favorite Plastic Man stories of the past?

I really enjoyed Mark Waid’s take on him in Justice League. It was heroic but annoying, which is how I feel Plas would be in the JLA. The rest is mostly Jack Cole stuff. I can’t help it, he’s who I think of when I see Plas.

Ian: You have an incredible art team working with you on Plastic Man, what are the biggest assets artist Adriana Melo & colorist Kelly Fitzpatrick bring to the series?

GS: I worked with Adriana very early in my career on Rose and Thorn, we had an amazing time, and she was incredible at drawing sexy men AND women, just gifted in that way. But I sort of typecast her, because she was so good at that, I didn’t think of her for Plas at first. Then we talked in Brazil at a con, and I could see all the other amazing things she could do and we went for it. But she’s just nailed it all, the grim setting, the humorous poses, the sexy characters, she just KILLS on it. There’s a page in issue two that makes me laugh hard every time I think of it, and it’s totally because of Adriana.

Kelly is just fantastic…I didn’t get to see her work on the book until the previews came out, and she does exactly my favorite kind of coloring, which is coloring that brings life to the page. She’s not afraid to mix tones on a single page, or even panel, so you have these grim colors with an eye popping focus color, it’s amazing. LOVE her work.

Ian: Aside from Plastic Man you’ve done some phenomenal work with comics including some groundbreaking work that adds the fight for LGBTQ+ representation in comics. Each LGBTQ+ storyline and character that you have created had a massive impact on the community. Which of these has been the of those characters or story arcs has been the most meaningful to you?

GS: Oh, that’s very kind but I think it gives me too much credit. Most of the best work in this regard is quite understandably done by LGBTQ creators. I’m just trying to reflect the real world and the readership. It bothered me tremendously that the readership would show up at cons and be so incredibly diverse, but we were still publishing mostly books that didn’t HAVE any. All the right-wing gripes about this are really ignoring a simple fact, that our comics looked like Mayberry in a world that had passed that by.

But I would say, of the characters I have written, I think Alysia Yeoh, Batgirl’s best friend, who was revealed as transgender, probably had the biggest impact. I still get a lot of letters from people who say that her story, and the way she carried herself, was extremely meaningful to them. And it made me happy that she became the second most popular character in the book, absolutely. 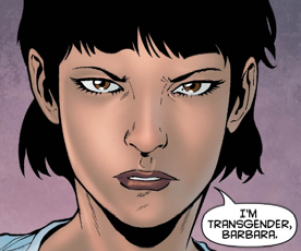 Alysia Yeoh comes out to Barbara

All I want is for people to feel welcome to comics. I want the gates to be open for everyone.  If I am playing some tiny role in that happening, I am very very happy.

A comic-loving doofus eager to see the worlds on the page reflect the wonderfully diverse world we all share!

Written by
Ian Cameron
A comic-loving doofus eager to see the worlds on the page reflect the wonderfully diverse world we all share!

0 0
Previous Article*New Flash* A New Chapter for the Avengers even though a new one just started?Next Article*NEWS FLASH* The Iceman Cometh – Marvel to relaunch Iceman