When Comics Get Political
In this column I will dive into times, throughout superhero history, that comics got political. There seems to be a constant debate if political discussion has a place in the medium. I hope to show that politics and superhero comics go together. This week I’m taking a look at “Peter Parker: The Spectacular Spider-Man #71” and the gun debate within its pages. 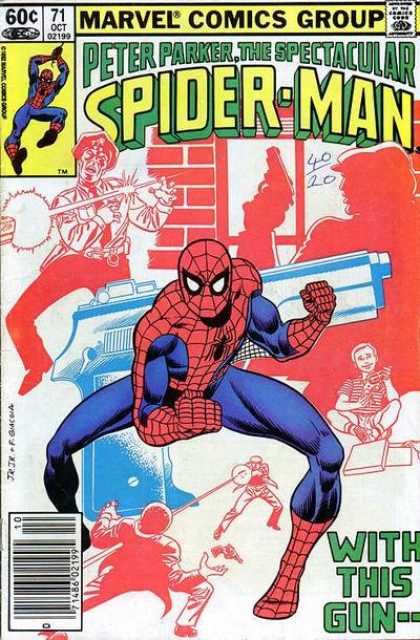 The Story
This issue starts much like many Spider-Man stories, with a crime. Spider-Man is in pursuit of two criminals in midst of robbing a store. He is able to easily disarm the burglars, but it is too late. The owner of the store shows up, and in confusion, shoots and kills one of the intruders. Spider-Man spends the rest of the issue depressed about his inability to stop the death of this young victim. There is an emotional moment with Spider-Man holding the dead body in his arms. He then makes it a mission of his to stop a gun smuggling ring. This story highlights the gun violence more than any other Spider-Man story. Even in the art, there is far more weight to every shot fired.

The never-ending debate
Spider-Man comics have always been political. The newspaper setting of the earlier comics really highlights political debates. J Jonah Jameson and Robbie Robertson have traditionally played the Right (JJJ) vs Left (Robbie) point of view in many issues. There has also been a general level of respect going both ways for each character. However, the antagonistic nature of Jameson never really hides the author’s intent in each debate. In this issue, Jameson takes a step back and it is Lance Bannon filling in the right-leaning role. Lance Bannon was the antagonistic photographer working in competition with Peter Parker at the Bugle. Both Robertson and Bannon highlight key statistics and opinions on the second amendment. But, it is Bannon who gets the final word. The issue closes with Jameson posing an open-ended question to the reader about gun violence.

Some examples from the story

“Perhaps if neither had possessed a handgun, the boy would never have summoned up the courage to commit the crime in the first place and the store owner might have phoned for the police instead of shooting”

“..a handgun purchased for ‘protection’ is more likely to kill you or a member of your family than it is to kill a burglar”

“The store owner was defending his property! Are you saying that one should be allowed to own handguns?…All the more reason for people to be able to purchase and own a handgun – to protect themselves”

“But criminals will always find some way to get handguns” (Narration box: Robbie Robertson finds that he has no answer..)

“While the police – despite Spider-Man’s interference – were stopping one gun-smuggling operation in Brooklyn 12 more handgun shootings took place in New York City alone! What’s the answer? Can anyone tell me?”

Author intent?
The intent of the author(s) is a little harder to parse out. This issue is unique as it is both Bill Mantlo and Tom Defalco that have writing duties here. Bill Mantlo even left comics to become a public defender. He clearly leans left and tried to make a career out of helping out the less fortunate (sadly Mantlo was the victim of a hit and run and has suffered permanent brain damage since). It could be argued that the character who is friendly with our protagonist (Spider-Man) is the one the readers should side with. Robbie Robertson is always displayed as a wise figure in the comics, and often the reader is led to side with him. He is the one who is clearly for gun control and interprets the second amendment differently than the NRA would. Lance Bannon, has always been a clear antagonist (for Peter Parker). Yet he does not sound unreasonable here. Could this be intentional? If his point of view was meant to be seen as valid, why give it to the character readers have grown to trust the least over many issues? There is also the fact that this comic revolves around the death of a victim of gun violence, and Spider-Man is considerably shaken up. I would argue that this issue makes the case for gun control, and is staunchly against the ability of the general public to be armed (with handguns). They even strive to make the reader feel sympathy for an intruder being shot and killed. It was an intentional choice to have someone die that was committing a crime, and still make the shooting seem unwarranted.

Regardless, this comic is trying to say something about gun control. It is not taking any kind of apolitical stance. It is not even subtle about it and makes the political discussion the focal point of the comic. If you can find this issue in a back bin, you should pick it up.

Side note – If you feel you can, please help Bill Mantlo. You can donate to help at www.billmantlo.com

5 0
Previous ArticleI Am The Master of My Fate, I Am The Captain of My Soul (Harley Quinn #50 Comic Review)Next ArticleTaking House Calls (Batman:Kings Of Fear #2 Review)