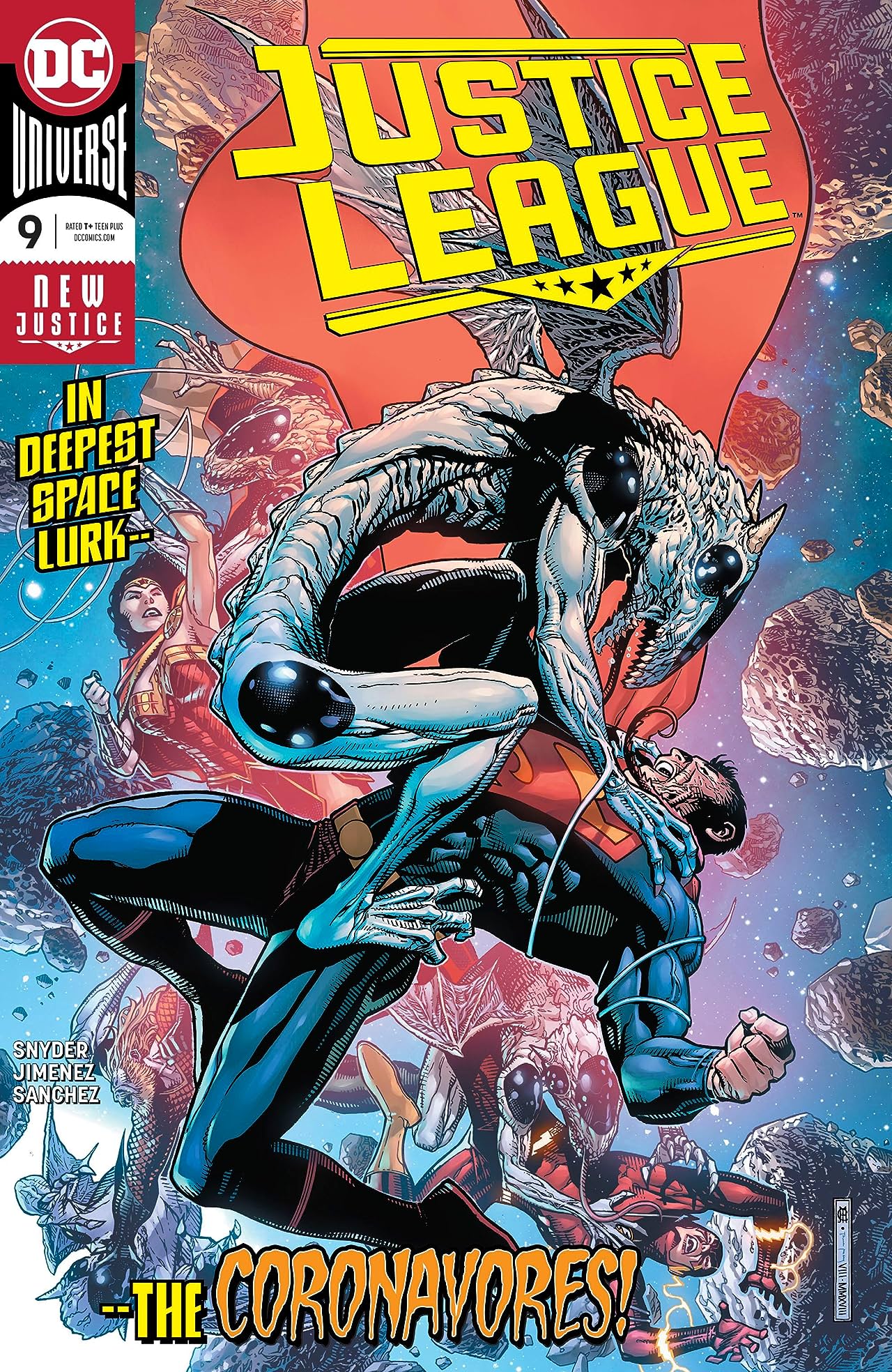 Intro
Scott Snyder and Jorge Jimenez return to the title and provide another stop-gap issue. While the last issue focused on the mysteries and villains, this issue gives the heroes a chance to shine. Nothing major happens here, instead, this issue is wall to wall character development. Superman is putting the moon back together, Batman is healing, and all the other characters have little moments together. This issue is designed like a one-shot that anyone can pick up.

The Story
The main story is bookended with Superman putting the moon back together while fighting off an alien force. The conflict is never played out as tense, as Superman seems calm, collected, and under control. The moon being repaired mirrors Batman’s recovery and provides a fairly clear analogy between the two plot threads. All the other heroes have fun friendly moments and lets the reader see how these heroes interact and behave outside of conflict. There is also a tour of the Hall of Justice itself, and how each hero’s room reflects their personality. Overall, you could give this issue to any reader in order to provide them insight into all of the protagonists.

Tim’s Thoughts
Scott Snyder never had a chance to really explain his heroes as this series, and in No Justice, before it went right into the action. It was a nice change of pace for Snyder to show us who these characters are, and how he sees the themes each will explore. Characters are paired up in the issue and it really gives the reader a chance to see how the interpersonal relationships stand. We know that Superman and Batman will happily team up to catch the Joker and Lex Luthor, but this issue shows us how The Man of Steel learns from the vulnerability of Batman’s fragile human form. The only knock against this form of storytelling is it comes right off the heels of last issue’s stop-gap nature. Readers may feel they are ready for the story to move forward, rather than stand still yet again. Starman is a giant mystery that was left on the table in issue #7, yet still gets barely a mention. While I appreciate the storytelling within this issue it is the placement in the series that hurts it more than anything.

Jorge Jimenez’s art is a known quantity now. It is great to have him back on the title, as there is a sheer uptick in storytelling from the previous issue. All the dialogue scenes do a great job at making these heroes relatable. But the real shining moment for the art is the single panel snapshots of each heroes room in the Hall of Justice. The art of each setting clearly expresses each hero’s personality. Even if you removed Scott Snyder’s words you would still get all the meaning within. It is a really fun series of moments in the issue, and easily the highlight. It is clear Jimenez has a deep understanding of each character, and can easily juggle the stress of an ensemble piece easily.

Summary
Your mileage may vary with this title. If you want more characterization this issue will not disappoint. If you are looking forward to the next arc, and finding out more of the mysteries presented in the series, then this issue might not be for you.
Good
Bad
8
Great

A Dream in the Darkness (Dark Nights Metal #4 Recap and Comic Review)
December 20, 2017