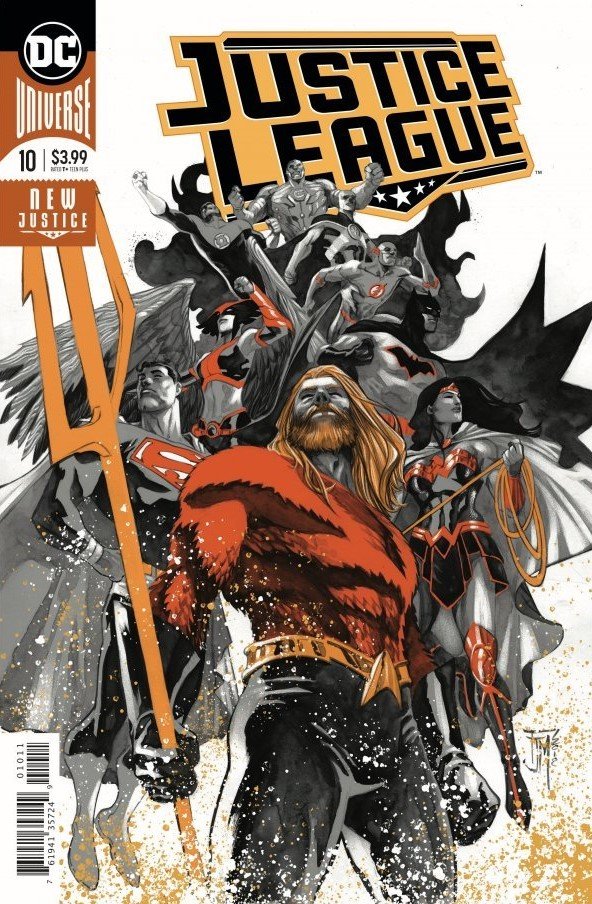 Intro
You may have heard there is an Aquaman movie coming out. Therefore, it is time for the big Aquaman centric crossover to hopefully cash in on the zeitgeist. With this comic DC is currently now juggling three major events (Doomsday Clock and Heroes in Crisis being the other two). Luckily, it seems that even though this event is a little unwieldy (more on that later) this one is planned to be fairly short, and over by next month. All just in time before that Aquaman film, funny how it worked that way.

The Story
“Drowned Earth” has been hinted at for the last couple of Justice League issues, and we finally get the main concept explained. Poseidon is dead, which affects both the Aquaman and Wonder Woman universes. So it makes sense that the Justice league would tackle this issue as a team. Aquaman, Wonder Woman, and Firestorm dive into the mystery surrounding Poseidon’s death and come across an alien form of water that transforms anyone who touches it into a sea monster. Aquaman ends up being taken by Sea Gods, from other planets, and it is here that the thrust of the event and stakes are explained.

Tim’s Thoughts
The concept here is solid, an alien invasion led by ocean Gods that want to drown the Earth. The stakes are high, and Scott Snyder is amazing at playing off the character interactions. Batman is in a wheelchair and full body cast, yet Snyder still writes him like a badass. It is clear that he feels at home giving voice and purpose to the entire ensemble with ease. The only issue with the writing is the same problem that plagues many crossovers. The issue feels fragmented, even more so than traditional serialized storytelling. I had to read Aquaman #41 to get the other half of what was going on here, as they both lead into the next part of the story. Crossovers work best when each series can stand alone, even when being a larger part of the whole. That isn’t what is happening here. Add to the fact that “Drowned Earth” is not as interesting as the previous mysteries surrounding the source wall, Legion of Doom, Starman, and the totality. It is those threads that dangle now, in service of this new threat. When comparing what has come before, and where we are now, this plotline is just not as interesting to me.

Francis Manapul’s art however, is something to be excited about. While I have loved the art on the series previously, Manapul is one of my favorites working in the industry today. The way he colors gives this softer feel to everything and just gives every panel a “warmth” I can’t describe any other way. His cartooning is fun to behold, and it stands out among the traditional style you see on the stands in most mainstream material. Readers are in for a treat now that he gets to play with a larger ensemble cast of the Justice League.

Summary
If you are really into Aquaman, you might like this issue more than I did. I admit that the general concept is fun, but the execution seems fragmented in this new crossover event. This would have been better focused in Justice League alone, or Aquaman alone. Hopefully something comes of this story, more than the obvious editorial mandate to catch on the Aquaman train while it is hot.
Good
Bad
7
Good

We are the invaders Sea King. (Justice League #10 Comic Review)

Justice League #10 Written By: Scott Snyder Art by: Francis Manapul Letterer: Tom Napolitano Intro You may have heard there is an Aquaman movie coming out. Therefore, it is time for the big Aquaman centric crossover to hopefu...
0
Average User Rating
0 votes
Have Your Say!
Your Rating: 0
Submit
Write A Review