When Comics Get Political
In this column I will dive into times, throughout superhero history, that comics got political. There seems to be a constant debate if political discussion has a place in the medium. I hope to show that politics and superhero comics go together. This time Green Lantern learns to ground himself and his mission. 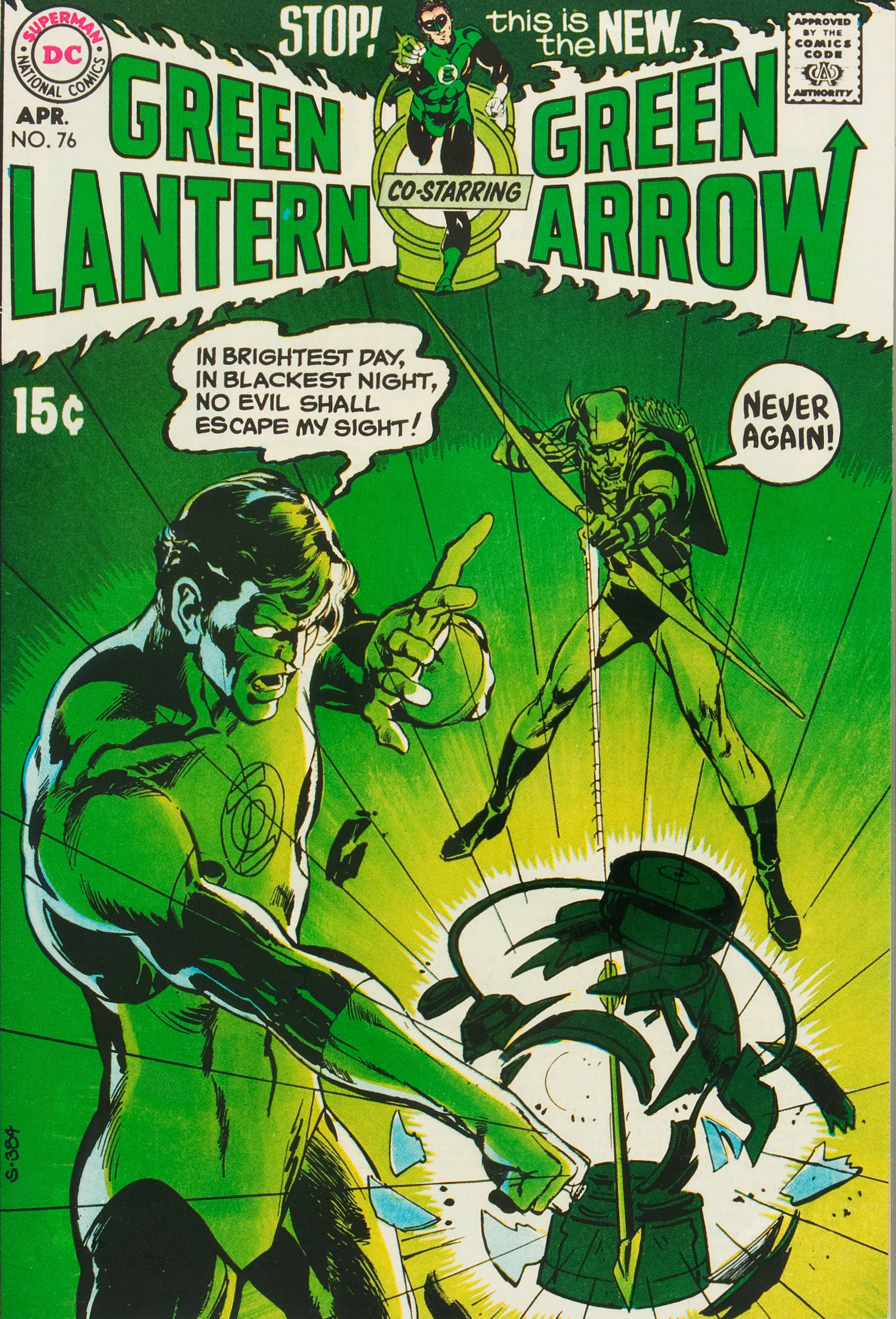 The Story
This story starts simple enough. Green Lantern (Hal Jordan) finds a man being attacked on the street and saves him. After he rescues the victim, he finds that people on the street start pelting him with garbage, and are upset he interfered. Adding to the drama, Green Arrow comes along and also gets angry that Hal saved the individual. Arrow explains that the man being attacked was a landlord who was going to evict all the tenants, in order to build a parking lot. Hal still stands his ground and explains that, regardless of the reason, no one deserves to be a victim of violence. When Green Lantern confronts the man later he tries to appeal to his morality and learns that there is no swaying him. The landlord could not care less about the plight of the people in his building and only cares about making money. The comic is wrapped up when Green Lantern and Green Arrow team up and pin illegal activity on the landlord.

Green Lantern vs Green Arrow (Right vs Left)
Green Lantern is not a vigilante. He is an officer of the law, one that adheres to the rules and regulations of the Green Lantern corps. His view is much more focused on black and white morality, rather than looking at the larger societal problems. He sees a man being attacked, so he intervenes. He doesn’t care why that man is being attacked.

Green Arrow is a street-level vigilante. He is fighting for the people. There is a reason he is dressed in Robin Hood garb. He is the social justice warrior helping the poor and marginalized. He adheres to no code but his own. Green Arrow has no issues telling Green Lantern that he was wrong for stopping the attack. To him, these people on the streets were carrying out justice the same way many superheroes do.

This dynamic makes for a really great Right (Lantern) vs Left (Arrow) debate. Now this comic came out in 1970 but the politics covered here are still relevant today. Gentrification, race relations, and the corrupt rich elite still touch on contemporary issues. Dennis O’Neil (writer) and Neal Adams (artist) make it fairly clear who they side with, in this issue. The landlord is seen as a villain by both parties by the end of the comic, and Green Lantern eventually learns from Green Arrow. Grounding the character and changing the comic Green Lantern has been out of touch with his home for too long. His comic was one of fantastic space adventures. But now, the title has turned into a team up, of two heroes taking on common American social issues. The change of tone of this title can be direct proof that O’Neil and Adams wanted to create a political comic. Even more poignant is the fact they turned this space adventure comic into a social justice comic book. It is important to note that Hal Jordan is never shown in this issue as wrong, simply flawed and out of touch. This series is also a personal journey for Green Arrow, as well as Green Lantern, and it will be something we tackle again.