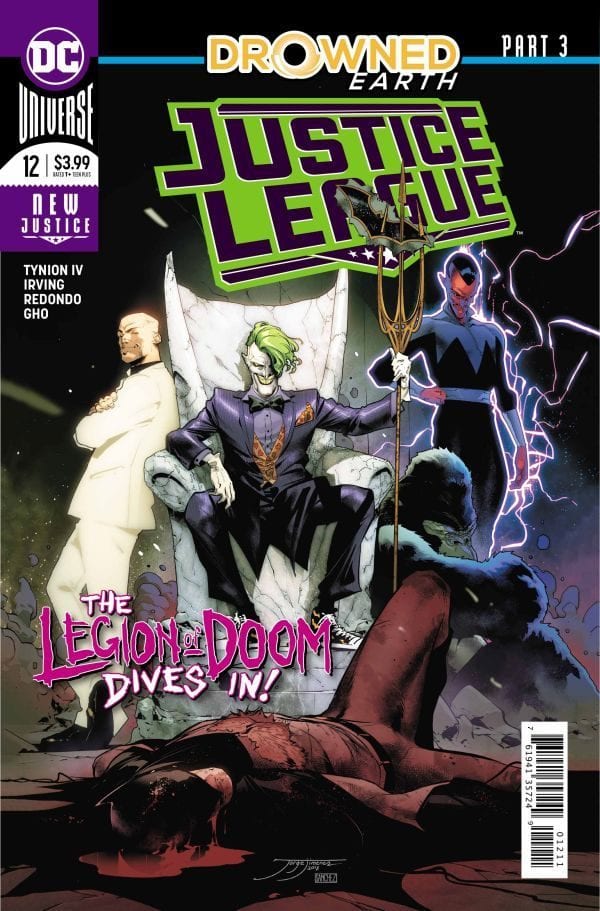 Drowned Earth is almost over, this being the penultimate chapter in the crossover. Going into this issue the Earth is almost completely flooded, everyone who touched the water has become a horrible sea creature, and Black Manta has stolen Aquaman’s powers. Things are not going well for the heroes, and if the cover of this issue doesn’t give it away, it isn’t getting much better here.

The Story
Every once in a while the Justice League series switches focus from the Justice League to their evil counterparts in the Legion of Doom. This issue is framed around the villains more so than the heroes. With the Legion of Doom breaking into the Hall of Justice, they get their hands on some important weapons and tools. Without spoiling anything, Lex Luthor easily has the upper hand in this situation. The only hero still protecting the hall is Batman, who is currently without the use of his arms and legs. Wonder Woman and Aquaman are still trying to work with Poseidon in the Graveyard of the Gods. Superman, Flash, and Mera are prisoners of the intergalactic ocean gods and Black Manta. This is a story where very little goes right for the protagonists and stakes are raised yet again.

Tim’s Thoughts
I have been enjoying Tynion’s Legion of Doom focused issues, and this one is no different. I feel that there was far more focus in this comic than there has been in previous Drowned Earth arcs. Nothing is re-explained, and all new exposition is interesting and helps build the DC universe as a whole. This issue is the first to directly connect to the larger story Snyder has set up during his Justice League run, and not solely focus on “Drowned Earth.” The Totality is no longer ignored, and Lex’s larger plans are coming together. This is by far the strongest issue yet in the crossover. Before this, the crossover seemed to be meandering and skippable. The beats were always there but the journey wasn’t always worth it. This issue really ties it all in together, and actually made me excited to see how this ends.

Frazer Irving and Bruno Redondo both deliver pages of art. Each artist is strong, but they have wildly different styles (to say the least). Redondo has a very clean DC house style look to his art. This is not a bad thing at all, as I think he pulls off every page he works on. He handles the entire exchange between Batman and The Legion of Doon, and it is by far the most fun aspect of the book. Irving is a unique artist. I have always been a fan of his work, and he has worked on some amazing comics. I did enjoy his work here, but it was quite the change in tone from jumping from Redondo to him. This would not be a bad thing at all if both artists focused on a respective plot thread. Redondo worked on the Hall of Justice scenes exclusively, Irving worked on the Graveyard of the Gods scenes exclusively, but the shared duties on the scenes with Black Manta. Irving is an inspired choice for the Graveyard of the Gods. His art really makes the setting seem mystical. However, jumping from one artist to another in the third plotline created more confusion than necessary. Especially when both artists approach storytelling in vastly different manners. All the art was excellent but lacked the cohesion it needed to really be pulled off in an appealing manner.

Summary
This issue turned me around on Drowned Earth. A feat I thought impossible. I had been enjoying the overall story beats but felt everything lacked focus. This issue has far more focus. It loses some of that cohesion in the artistic direction, but overall a really great issue. A must-read for fans of the crossover or Justice League in general.
Good
8
Great

Justice League #12 Written By: James Tynion IV Art by: Frazer Irving and Bruno Redondo Colors: Irving and Sunny Gho Letterer: Tom Napolitano Drowned Earth is almost over, this being the penultimate chapter in the crossove...
0
Average User Rating
0 votes
Have Your Say!
Your Rating: 0
Submit
Write A Review