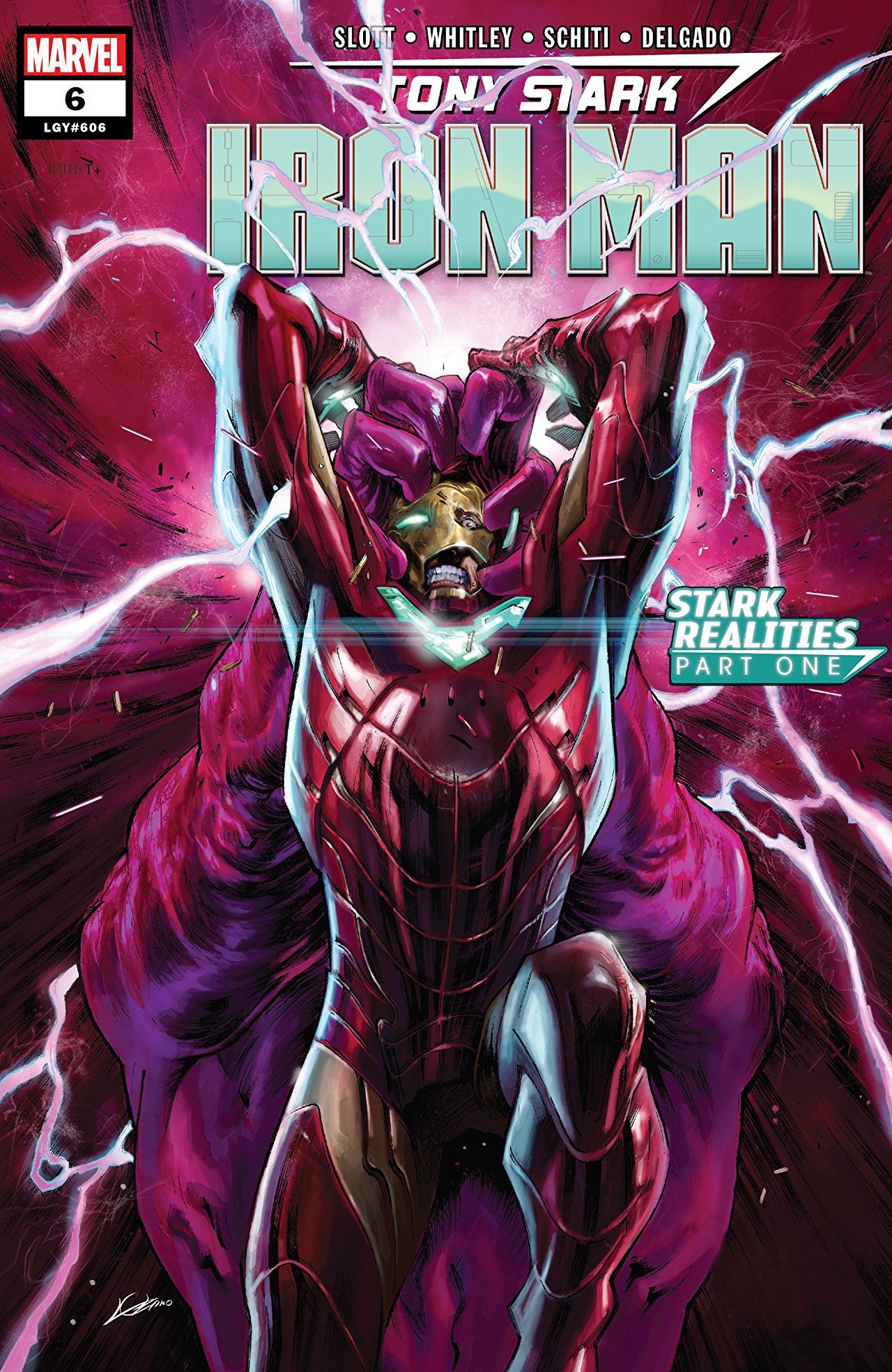 After a 5 part series of one-shot stories, Tony Stark: Iron Man starts its first multi-issue story. The previous five issues all built the new status quo, and now we are seeing how some of these may tie together. Wasp and Iron Man’s relationship, Tony Stark’s estranged mother, and the collective side characters from Stark Unlimited are all touched on in this issue.

The Story
Stark Unlimited has created the newest phenomenon, the eScape. The eScape is essentially an Iron Man mask that double as a virtual reality headset. Players can go into whatever world they want and become whomever they want. This item is in so much demand it has become worth more than anything else. However, like any online interface, the eScape is quickly taken over by trolls. Racism, misogyny, and other forms of xenophobia run rampant on the servers. Luckily, there is a failsafe program where a giant robot forcefully removes any hateful troll from the system.

Tim’s Thoughts
When I first started reading this issue I immediately thought that this was going to be “Ready Player One” but for Iron Man. Luckily, this story is not as reductive as that, and the only shared thread is a virtual reality system that has become immensely popular. Dan Slott shares the writing duties with Jeremy Whitley and they clearly work well together. Both writers are known for being able to play with humor and create really fun accessible stories. Both writers have faced their fair share of online harassment and trolling so it is only natural they put some of those experiences in this comic. The antagonist in this issue is someone you may have encountered online before. The only issue is he is a very small part of the comic, and I would have liked to see more. Thankfully, I feel that his time to shine will be in the next issue, as it does end on a cliffhanger suggesting that much more is to come. There is also a great moment with Jocasta, the robotic AI member of the team, using The eScape to feel like a human woman who is just relaxing. She also has her own “Say Anything” moment that made me chuckle. This issue is a great introduction to the new arc. Both the writers clearly tie threads together, while creating this series first big event. I am really looking forward to seeing how this will play out.

Valerio Schiti’s art here is incredible. He has to juggle scenes in the real world and in the virtual world. The switches are handled perfectly. The world in The eScape jumps right off the page. You can tell Schiti was having fun working in a world with no boundaries. At the same time, he is able to provide pathos for Jocasta in the simple panels where she is pretending to be human. This comic has an incredibly varied tone and cast throughout, but the art here is able to create a balance and create a very cohesive piece.

Summary
I was enjoying the previous done-in-one stories in the last five issues, but I am happy the creative team is tackling something larger here. This issue is well laid out for new readers, or those who have been with the series from the start. The villain is clear but underutilized at the moment, but I am excited to see more of him next issue.
Good
Bad
9
Amazing

Removing The Stigma – Talking Mental Health and The Wasp with Jeremy Whitley
March 31, 2019