When Comics Get Political
In this column, I will dive into times, throughout superhero history, that comics got political. There seems to be a constant debate if political discussion has a place in the medium. I hope to show that politics and superhero comics go together. This time President Wonder Woman. 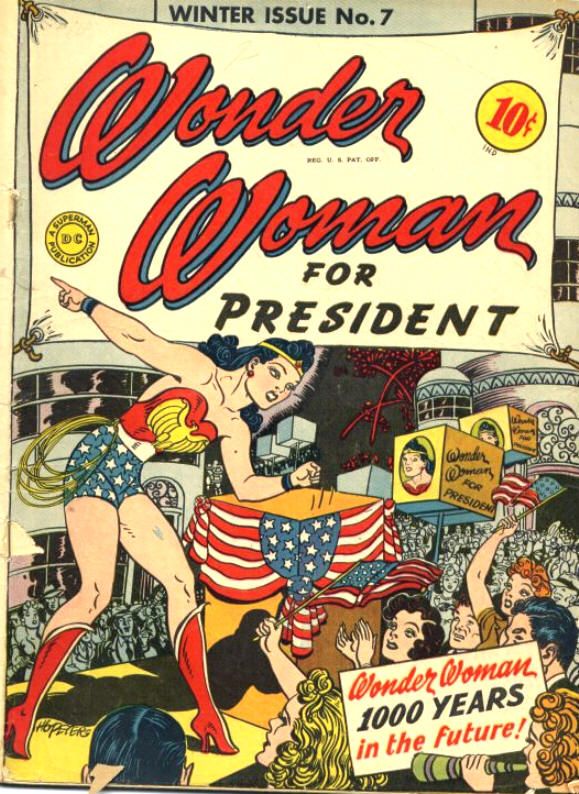 It’s a Man’s World
Wonder Woman came bursting onto the scene in 1941. A creation of William Moulton Marston and Harry G. Peter. Becoming one of the first female superhero led comic series. While there were comics “aimed” at a female audience, Wonder Woman was one of the first creations done so in order to empower women. Both the writer and artist were proud supporters of the feminist movement. Harry G. Peter, even created political comics supporting the suffragette movement in the early 1910s. Many people have pointed out the design of Wonder Woman being close to a lot of this early art. The creative team pulled no punches when it came to exposing the problems in the patriarchy, quite a bold move to make in the 1940s. Wonder Woman was created as a political statement, and I could easily run this editorial on Wonder Woman comics alone.

President Wonder Woman Synopsis
I was pointed towards this issue of Wonder Woman in particular, as the message is fairly clear. Wonder Woman has a magical device that looks to the future year of 3000AD where women are now in charge of the world. Rather than the parties of Democrats and Republicans, we have the Men’s party and the Women’s party. In the future, the Women’s party seem to be running a fairly utopian society. The comic even goes further into prison reform where prisoners are not punished but treated as humans. One of the leading Men’s rights activists (not directly called that but fits the title in all respects) escapes prison because of how minimal the protection in the prison is. The second story in the comic has Wonder Woman running for president and initially losing when the Men’s Party fixes the results. In both cases, the plot ends the same with Wonder Woman saving the day. 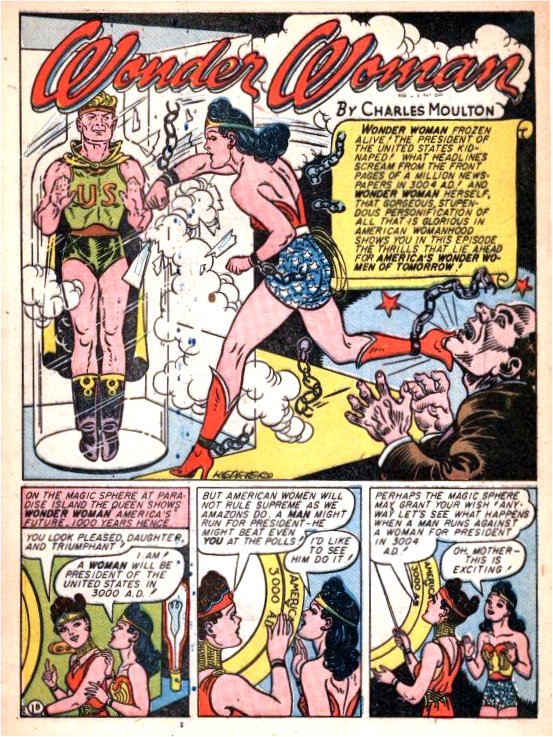 Author Intent
I think it is pretty clear what the intent of this story is. Every man in this comic is shown to be foolish and selfish. Even Steven Trevor is taken advantage of and used as a pawn for the Men’s Party. Every woman in the comic has pure and noble intentions. They aren’t looking out for themselves, but for society as a whole. Just looking at how the men are drawn, grotesque and monstrous, and the women are all beautiful shows what Harry G. Peter was going for. Nothing is subtle in this comic, but it shouldn’t be. The men in the comic consistently throw around misogynistic language showing how their motives were steeped in hate. I found it interesting that prison politics and reform was brought up as well. It simply wasn’t feminism equals female power, but feminism equal progressive ideals. It clearly shows that in a man’s world violence and harsh punishments are standard, while a female leader would look at all issues empathetically. It is a utopian idea, but that was the genre this issue was playing with. The women in power don’t even control it with an iron fist. Democracy is well and alive in this universe and society has chosen to keep women in power as it benefits everyone as a whole.

Wonder Woman is a powerful figure in pop culture. Her stories have always been more than just “adventure comics.” She is a feminist icon created to inspire a better society. To quote Moulton himself, “The only hope for civilization is the greater freedom, development and equality of women.”

The Top 10 Ongoing Comics Queer Women Should Be Reading
October 31, 2018