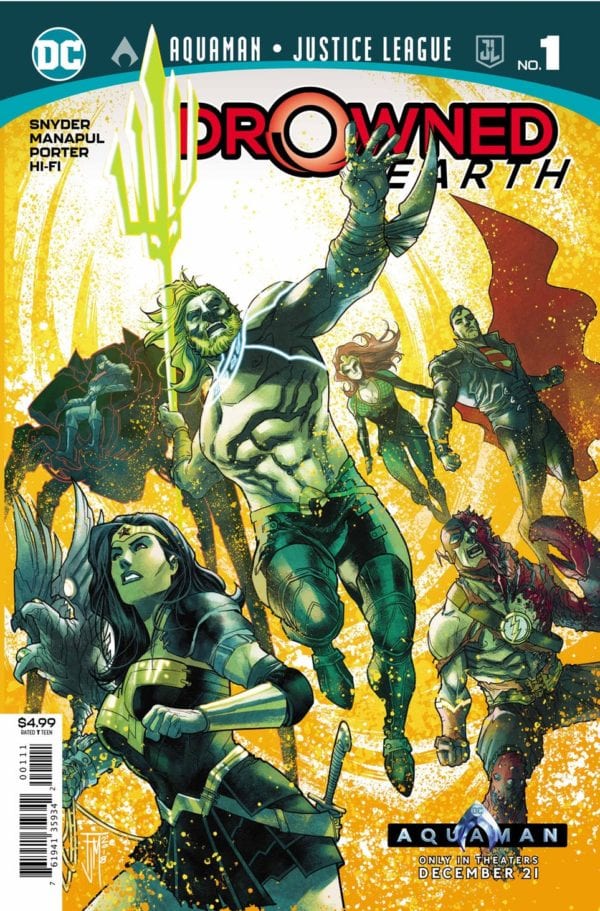 Intro
Drowned Earth is finally coming to an end. After roughly a month of crossover issues, the story finds its conclusion. When this issue opens Black Manta has all of Aquaman’s powers and the Ocean masters have the upper hand against the heroes. Much of the world is underwater, with the inhabitants changed into sea creatures.

The Story
This is a large issue but the story is fairly straightforward. Aquaman returns and works with the Justice League to save the world. This issue is basically one giant final battle, and for me to explain much of it would constitute some major spoilers. Everyone, hero, and villain, get their moment in this issue. Needless to say, this series ends with returning the universe to a new status quo, especially for Aquaman.

Tim’s Thoughts
My thoughts on Drowned Earth have been fairly consistent. I feel that the story has some really great moments, but things seem to be dragged out. Scott Snyder is one of my favorite writers, but I have yet to really connect with what he is doing here. Honestly, there are some amazing Aquaman moments in this comic and they all work toward building him up as a total badass. I haven’t seen such great moments with the character since Peter David’s run with the character, or Morrison’s use of him in JLA. But, I feel it just takes so long to get there. So much happens that seems over explained and drawn out. This is a comic where I found myself going from bored to excited depending on the page. I am looking forward to Snyder and company returning to the Justice league series proper, and continuing the storylines I was enjoying. My faith has not been lost on the series, or the writer, I am just done with Drowned Earth.

The art matches the inconsistency of the book. Francis Manpul puts together some amazing pages here. My love for his work has been stated in each part of this crossover. It is the one thing I cannot find any fault in. Manapul has made this series worth checking out, and he is easily the star of the show again here. Sadly, the swap to Howard Porter is more jarring than ever. Porter’s work on JLA in the late 90s is some of the best superhero comics ever produced. This is not to the standard he kept in the past. Even if the Porter art was great it is just too different in quality from Manapul and removes cohesion from the story. The artistic changes are not done for different settings or tone, they just switch.

Summary
Drowned Earth is not a “bad book” or a “bad event.” It is simply a mediocre affair with some memorable moments. I am excited to move on from this event.
Good
Bad
7
Good