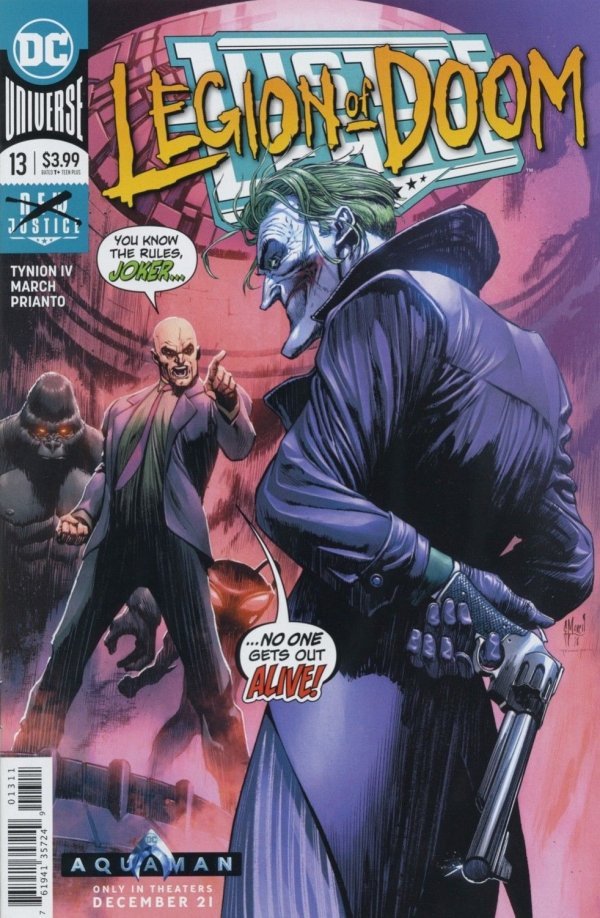 Intro
Drowned Earth is done, and Justice League returns to its focus on The Legion of Doom. This issue is technically part 3 in the Legion of Doom arc (which pops up sporadically throughout the run, rather than in consecutive issues). Therefore, our title heroes are removed from the story (literally taken off the title and cover) and this comic only deals with the villains. Overall, this issue stands alone as a one-shot, and can easily be read if you skipped the crossover. This chapter highlights two characters Lex Luthor and The Joker.

The Story
Superman and Batman have teamed up countless times in the past. There has been many series, and stories, over the last 70 years dedicated to this fact. These two heroes just work nicely together, and there are plenty of story ideas that just work well with their dynamic. Oddly enough though, the dynamic of their two main antagonists (Joker and Lex Luthor) has not always been focused on. This is mostly due to the fact that when Joker and Lex team-up they aren’t really seen as a working pair. Lex is a genius businessman/mad scientist/master manipulator, while The Joker is a serial killer clown and an agent of chaos. There is no reason why they would ever want to work together or could form a coherent plan as a unit. This comic changes a lot of that and explains exactly why Lex wanted The Joker in his Legion of Doom. Luthor even shows he respects Joker’s intellect and amoral attitude, seeing him as a peak human. This issue does something very few comics have done, show The Joker as an extremely intelligent character that really understands his own intentions and plans.

Tim’s Thoughts
I love The Joker. This isn’t the most controversial opinion, but I am of the thought that The Joker is one of the greatest super villains ever created. One thing I love about the character is how versatile he is. The Joker can be a big goofball one issue, and a dark horrific serial killer the next. Yet, somehow this tone change works with the overall idea of him being an agent of chaos in the world. Tynion takes The Joker and elevates him to a status on equal footing (if not above) Lex Luthor’s intellect. Joker has been shown to be a chemical engineer with his elaborate plans of using his “Joker Gas” to destroy Gotham City (one of which starts off this issue). So it stands to reason he is not a fool, even if he is a clown. Tynion shows him one-minute killing people for no reason, and the next carrying out a well constructed and laid out plan. I wish I could describe what makes this issue so great, but I would spoil a lot of the fun. Tynion IV has created one of my favorite Joker stories I have ever read here. It should be held up as an example for people to read before tackling the character.

Guillem March has a really unique and fun style to his art, and it gels perfectly with a Joker-centric story. The energy on each page is exciting. The Joker is drawn in ridiculous and unsettling ways to mirror how Tynion is writing the character. I can tell he had a lot of fun playing with making the character look evil and menacing in one panel, and then a goofball on the next. He was an inspired choice for this issue, and I hope he gets to work with The Joker again.

Summary
This is a really great Legion of Doom story. Even if you are not into Justice League, you should still read this issue. The Joker has such a great arc in this comic, and any fan of the character will appreciate what he does here. A must read.
Good
Bad
10
Perfect