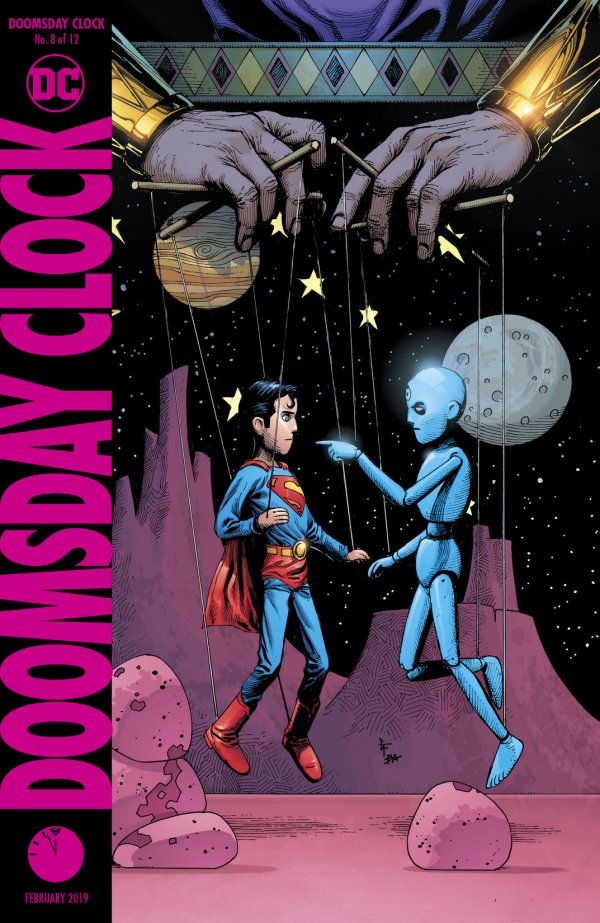 Intro
After the whirlwind of the last 7 issue building up to a boiling point, the series shifts focus. In many ways, this issue stands on its own. While there are threads that are touched on here, from previous issues, this comic focuses solely on one event. The Watchmen characters are only mentioned briefly (The contents of Rorschach’s package to Lois Lane are revealed, and Ozymandias bookends the issue) and this time the story focuses on a political tale featuring Superman front and center.

The Story
This story is all about one event, and the larger question of the “Superman Theory.” This theory looks at how the world would react if 97% of metahumans (heroes and villains) come from the USA. Here it shows Russia taking this theory as an excuse to detain all metahumans (even babies) and also build up their own heroes in a new arms race. Firestorm (who can transmutate all non-organic matter) is accused of being created in an American government project. While in Russia, he accidentally turns many Russian protestors into actual glass, which is something the character’s power set has not allowed in the past. Superman plays the central protagonist in this comic trying to help Firestorm, barter peace with Russia, and negotiate with the superhero nation of Kahdaq.

Tim’s Thoughts
Geoff John’s has shown a deep understanding of Superman in the past, and has even been lead writer on Action Comics and Superman. His vision for Superman is one of compassion and peace. Even though Firestorm effectively killed what seems like hundreds of people, Superman approaches him with care and understanding. There is an amazing scene where Firestorm warns he may meltdown (effectively becoming and atomic blast) and Superman puts his hand on Firestorm’s shoulder and just says “I’ll be fine.” A simple panel with a simple act of understanding and care shows who the character is. Johns also uses Batman as a foil, as he shows his calculating and overly logical reasoning. There is an instance in the comic where Superman makes a moral stand on an issue, and Batman is upset he is choosing sides. While the character is a peace maker and tries to see every angle of a problem, Superman is not above standing for what is right when it is clear. He does this as well when playing him against Black Adam, in the nation of Kahdaq. Black Adam is using his country as a place of refuge for the meta-humans in need. However, Superman sees Adam a cold-blooded killer, that is causing more harm than good. Superman points out they both work outside of international boundaries, but at least he does not kill and holds to a moral code. Johns clearly understands the thesis that makes up Superman, which is refreshing for a character that is often misunderstood and made overly complex for no reason. Outside of the beautifully constructed Superman story, hints are dropped of the larger mysteries. The Justice Society of America makes the briefest appearance in a really cool moment (hints have been dropping of their reintroduction to the DC Universe throughout the series). Finally, this comic ends on one hell of a cliffhanger that brings forward a new problem to solve.

Johns also brings politics into the forefront in this issue. The USA/Russia relations are stripped directly from the headlines. The Superhero arms race is directly linked to Watchmen. A famous quote in that book is, “The superman exists and he’s American” (referring to Dr. Manhattan). It is America’s superhero force that helps them win the Vietnam War in Watchmen. Johns brings this question of superheroes being “real” and mostly an American force to the DC universe. I really appreciated him playing with these political themes and I think he uses this thought experiment quite well. It is a nice tie thematically to Watchmen while linking the politics to a more contemporary issue.

Again, the art here is incredible, and par for the course in this series. Gary Frank really understands how to form a comic that respects the artistic integrity of Dave Gibbons (who worked on Watchmen). The Nine-panel grids are used throughout the issue, and only vary slightly. After the last issue of some interesting layouts, Frank returns to the focus that matches the story. I am starting to think that Gray Frank is drawing the definitive contemporary take on Superman, it is hard for me to think of many artists that understand the character as well as he does.

Summary
A great Superman story, that reads well on its own apart from the series. If you have not been reading Doomsday Clock, you could still pick this up and understand what is happening. It may even entice you to backtrack and see what came before. I am loving this series, and Geoff Johns and Gary Frank are pulling off the impossible, a sequel to Watchmen worth reading.
Good
Bad
10
Perfect