Inks by: Mark Morales and Segovia 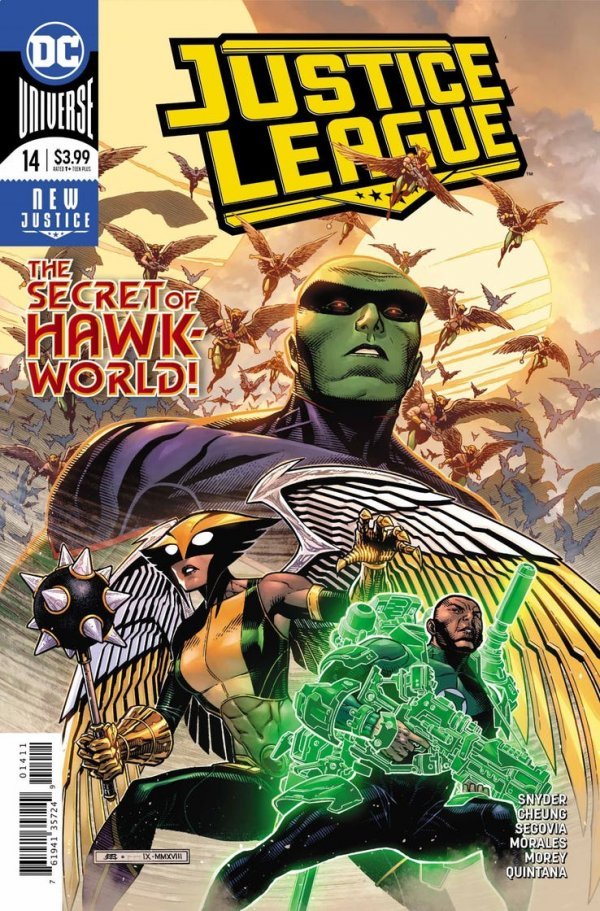 After the amazing Joker focused the previous issue, Justice League moves onto their next big arc. As the cover suggests Hawkworld (aka Thanagar Prime) is the main setting. Hawkgirl, Green Lantern (John Stewart), and Martian Manhunter skipped Drowned Earth for their mission to Thanagar. We finally get some ideas of what they were up to and unlock some of the mysteries that go back to the breaking of the source wall at the end of Dark Knights: Metal.

The Story
There are two stories in this comic, but one takes center stage and most of the focus. The minor story revolves around Batman and his quest to find out more about Starman and how he is connected to the Totality. This storyline only takes up three pages of the book (a 2 page set up at the start and a final cliffhanger page at the end). The rest of the book is the team’s mission to Hawkworld. Martian Manhunter is looking for a martian elder on the planet, and Hawkgirl is trying to find answers to the symbols that have appeared on her wings. This issue is just part one of a larger arc, and therefore only questions are provided with very few answers (and the ones you get only lead to more questions). Thanagar provides a very mysterious setting where no one is telling the truth, and dark secrets seem to be hiding everywhere. Going too much further into the story would get into spoiler territory.

Tim’s Thoughts
Tynion IV and Snyder have one of the most daunting tasks in comic book continuity. Taking on the challenge of Thanagar and the “Hawk” characters that go alongside it. There are very few characters in comics with backstories as confusing as Hawkgirl and Hawkman. Hawkgirl even jokes, “I know my history is complicated that you practically need a degree in quantum physics to track it properly.” She is not wrong as a quick search on the “Origins of Hawkman” is enough to make your head spin. Thankfully, the writing team here has leaned into this confusing narrative and turned it into a strength. Rather than simply trying to unravel and explain everything, they use the confusion as the center of the mystery. It is an intriguing concept. I will admit to not looking forward to this issue, as there are few heroes I become more detached from than Hawkman and his surrounding mess of a mythos. Snyder and Tynion IV have successfully made me interested in this story and wanting to read more. Tying this continuity mess into the larger plot, that Snyder has been building on for years, has made it an engaging piece. The B-plot of Batman and Starman was also great. It is always interesting when Batman is facing a challenge that he can’t seem to overcome, especially when he has failed (which happened when he lost the Totality). He provides some hints at things to come, and it is just enough to sow the seeds of the larger story going forward. Also, Jarro (a small Starro in a Jar, get it?) is quickly becoming the Justice League breakout character. He is not being overused by the writers and comes into play just enough to lighten the mood, while at the same time being integral to the overall story.

As you can see from the credits, multiple artists worked on this book. But, they did not commit the sin of switching teams in the middle of a scene. The bookends of the issue are done by one team, and everything on Hawkworld is another. This makes for the jumps in art acceptable and not jarring at all. While I think the moments with Starman, Batman, and Jarro where stronger pieces (artwise) the bulk of the interior pages were well done. Thanagar really looked like a interesting place and the world building done by the team was on point. It was as coherent of a piece as you could hope for with so many people working on the art.

Summary
Justice League jumps right into another arc. This time everything revolves around Thanagar prime and Hawkgirl. It is great to see what Martian Manhunter, Hawkgirl, and John Stewart have been up to since we last left them. Part one will have most people interested to see what comes next.
Good
Bad
9
Amazing

Relive Some of Superman’s Best Moments with Action Comics: 80 Years of Superman
April 22, 2018

We Learn The Whereabouts of Artemis and Bizarro! (Red Hood And The Outlaws Annual #3 Review)
August 6, 2019

I know my history is complicated (Justice League #14 Comic Review)