When Comics Get Political
In this column I will dive into times, throughout superhero history, that comics got political. There seems to be a constant debate if political discussion has a place in the medium. I hope to show that politics and superhero comics go together. This time we look at the first Social Justice Warrior in comics, Superman and Action Comics #1.

Action Comics #1
Probably the most famous comic ever written staring the most famous superhero. This is the issue that started the entire superhero genre. While many people can recognize the cover of the issue, and even more could tell you who Superman is, I doubt people have actually read the contents of this comic. Action Comics #1’s Superman story is a fairly short comic by today’s standards (only 13 pages) but packs in a lot. Superman’s origin is far more mysterious here. We know he is an Alien, he is incredibly strong, and can jump really high (his ability to fly came later). Interestingly enough, he is an orphan child from his home planet and also on Earth. Unnamed people find a baby, who will later be Superman, and turn him into and orphanage. Superman coming from poverty would resonate with an audience that were living through The Great Depression (by 1938 the economy was in “recovery” but far from being completely healthy). Clark Kent is shown in this comic, and he is a meek and mild reporter. He could not be more different than his alter ego, and in many ways Clark is a irredeemable putz (more on that later). Superman however fights gangsters, a wife beater, clears a woman’s name of murder, and takes on Washington D.C.’s lobbyist problem. In those short 13 pages the story is dense and sells a message of social justice, and anti-toxic masculinity. It is common for people to think that Social Justice Warriors are somehow “new” to comics, but it seems that superheroes were invented to fill that particular role.

The Murder
The first story has the least to it. Superman has some woman under his arms (she is tied up) and puts her on the Governor’s lawn. We later find out that this woman is a murderer and an innocent woman is about to get the death penalty for her crimes. The Governor does not seem to want to speak with Superman and is even locked behind a strong steel door. This gives the creative team a chance to show off the hero’s powers, but it also promotes a political message. Here is a politician who is uninterested in listening to the injustice of putting an innocent person on death row. The entire story even brings to the forefront the problem with capital punishment, mainly the fact that we sometimes catch the wrong person. Luckily, after some strong arming, the Governor has no choice but to stop the execution and arrest the proper person. It is also interesting that it is a woman who is falsely accused and not a man. While a woman is a murderer, it is also a woman who is saved. This message of injustice against women is something that is promoted throughout the comic.

Lois Lane
It is impossible to talk about the female voice in Superman comics without mentioning Lois Lane. In this issue she starts off as a very strong character. While she is damseled during her story, it takes a group of gangsters to kidnap her. Earlier, she is on a date with Clark Kent and she doesn’t seem to actually be attracted to him. Clark is far too much a “coward” for her tastes. However, she makes it clear she does not stand for toxic masculinity either. One of the same gangsters that kidnaps her later, butts in between her and Clark to have a dance. Clark Kent, being the weak willed person he is pretending to be, tells Lois to give in to the man’s advances. Lois does not stand for this and slaps him across the face. Rejecting unwanted sexual attention in the 1930s would be a fairly strong message, in a world where women were meant to “know their place.” It is a strong message today even. Flipping the gender stereotypes, having Lois be the strong one and Clark being weak, is interesting social commentary. Superman does save her from the kidnapping later, but playing Lois as strong removes her from being a simple “plot device” in this issue. She is three-dimensional character with agency.

Lois Lane does not take kindly to unwanted advances. A bold stance in which women were just getting power in society. Of course Clark Kent reinforces the the typical reaction men would have in this situation.

The Senator and the Lobbyist
The story ends with Superman taking out a lobbyist. We never find out what the lobbyist is doing, only that him and the senator have worked together to sneak something into a bill. The idea that bills are large and conflated messes that politicians can easily sneak in their own agendas, is nothing new. It is clear that the public was upset about this, even back in 1938. It is an interesting sub plot for a comic called “Action Comics.” Superman does not simply take out people that create physical threats, but challenges social threats as well. This story of the corrupt politician and the lobbyist, would be something that a certain section of comic readers would immediately get upset about if it was featured in a contemporary issue. 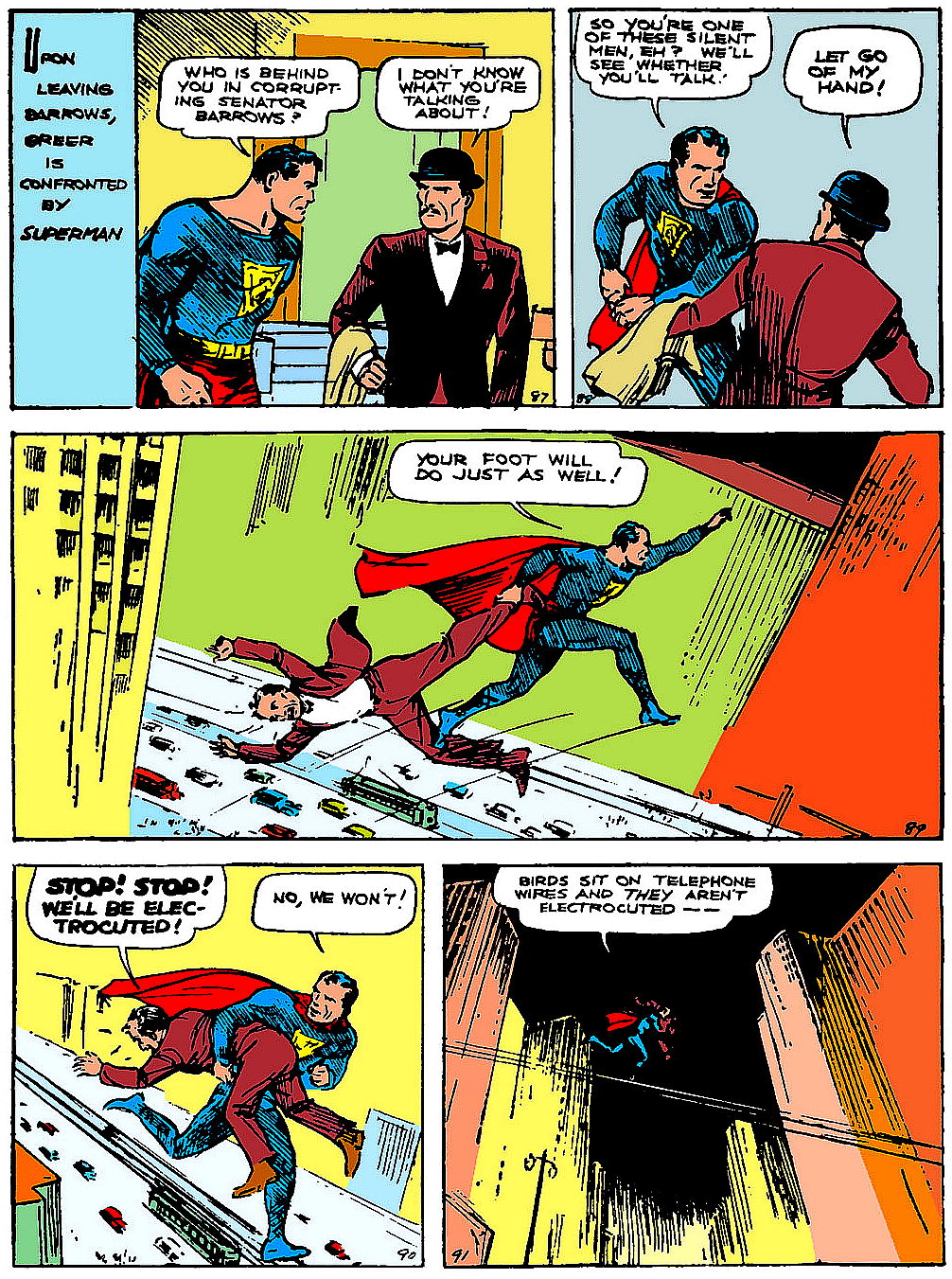 Superman sees political corruption as something he has to fight, as much as any violent gang.

Men in the Comic
After reading this issue I came to a conclusion that there was a clear message about men in this comic. Other than Superman himself, every man is shown as flawed and even toxic. Lois Lane, the sole female with agency (the other 3 are simply plot devices), is strong, multidimensional, and inspirational, just like Superman. Looking at the men we have an inadequate Governor, a stooge protecting him, a series a gangsters that are examples of “toxic masculinity,” a corrupt senator, a sleazy lobbyist, and a wife beater. Even Clark Kent himself is portrayed as a polar opposite of Superman, he is weak willed and refuses to stand up for what is right. In a matter of a page he goes from Superman taking out a wife beater to Clark Kent standing by as his date is about to be sexually assaulted. This poses a clear message for young boys reading this comic, they should be more like Superman and less like the other men in this comic. Action Comics #1 came out in 1938 and had the same message as a Gillette ad in 2019, that people found “too political” and “anti-men.” Superman is the best a man can get, and the political and social messages in this comic are as relevant today as they ever were. 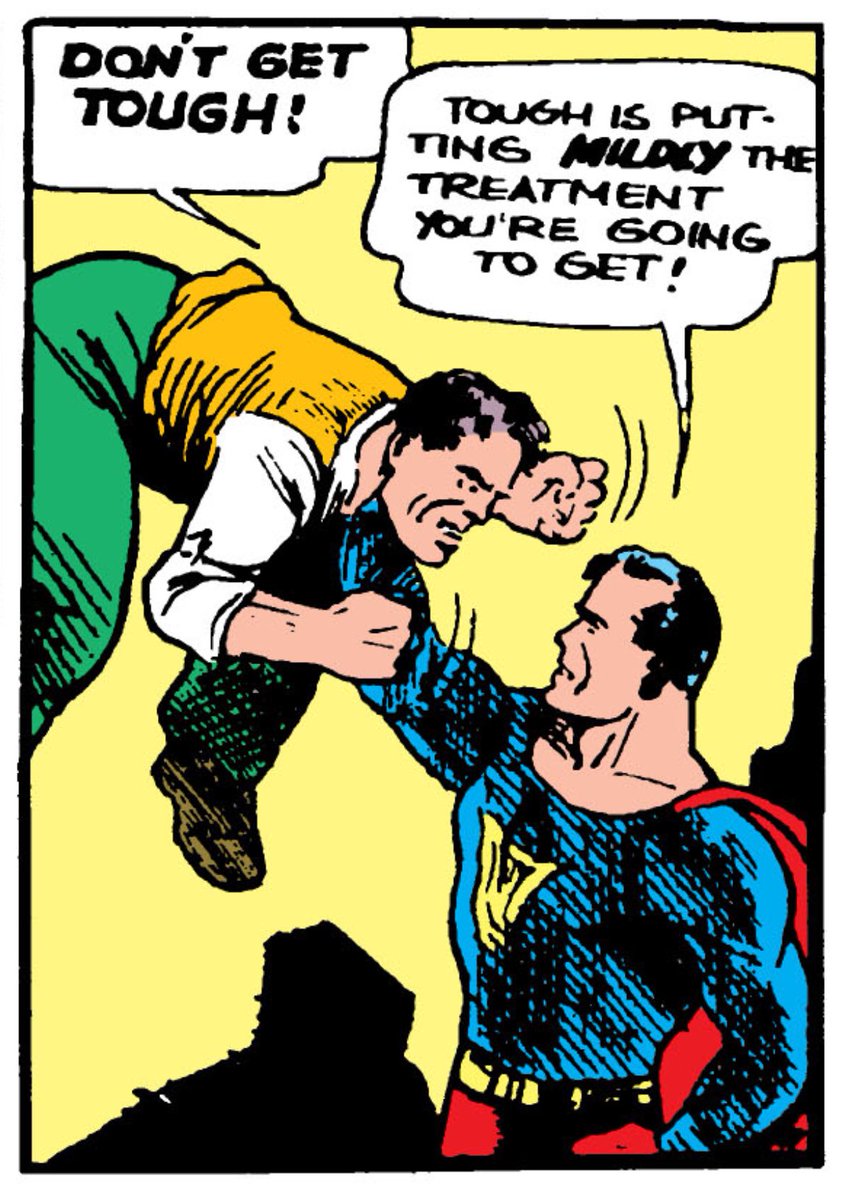 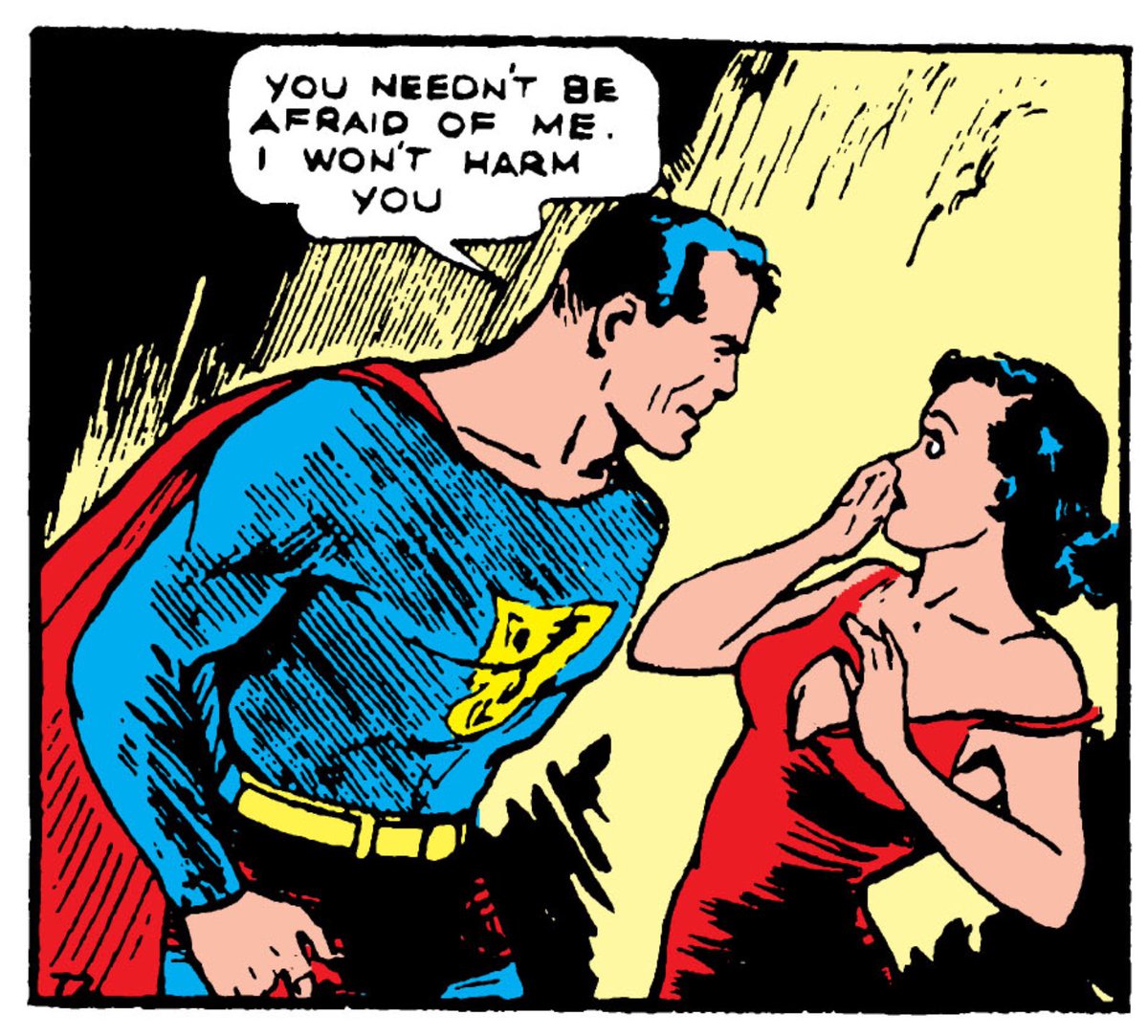 The two sides of Superman. On one hand you have someone who is willing to fight for what is right and stand up against domestic abuse (the man in his hand is the wife beater). On the other hand you have the gentle soul. While he is clearly physically empowering, he would never use his position of power to intimidate someone unfairly.