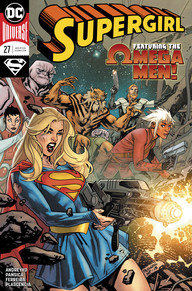 When we last left the Girl of Steel, she and the Omega Men were locked in a struggle with Harry Hokum and his evil regime.

The story opens with Z’ndr Kol tending to Krypto on the Citadel Grand Warship, the H.H. Hokum, in the Vega System. An ice creature berates Z’ndr, insisting that she sent him to observe Supergirl, and that he had broken his loyalty pact to her by siding with the Girl of Steel. Z’ndr states that she doesn’t understand, to which she answers, “Then enlighten me, my son.”

On that awesome cliffhanger, the action shifts to the other side of the warship, where Kara and the Omega Men are fighting Hokum’s lackeys. Kara, still weakened, is fending off Splyce with a ray gun. She taunts the Tamaranean, and bets on her launching another burst of solar energy at her, but Splyce has wised up this time. She blasts the ceiling, endangering the alien prisoners Kara had rescued last issue. This plan works, as Kara shields an alien child from the falling debris. Splyce grows a set of tentacles and moves in to attack once more.

Back on the bridge, Hokum relishes in watching the battle. One of his soldiers asks him if he would like to explore the “nuclear option” of crushing the rebellion once and for all, to which Hokum answers that they’re playing chess and he’s already four moves ahead.

Kara pleads with Splyce to stop while she can, offering to help her break away from Hokum. The Omega Men are loading the escaped prisoners onto transports as the warship is getting torn apart. The child Kara helped earlier runs towards them and yells, “Wait for me!” Kara notices that she’s running towards the crossfire, but before she can get to her, she is gunned down.

“Your affection for the weak is baffling! And it is your downfall!” Splyce taunts.

Kara snaps back, “Caring about the vulnerable isn’t a weakness! It is my biggest strength!” With that, she delivers a punch and rips off a couple of Splyce’s tentacles. Privately, Kara expresses her regret that she couldn’t save the child, but promises to avenge her.

On the other side of the ship, Z’ndr continues to plead Kara’s case. He says that he and her aren’t that different, that like him, she is in pursuit of knowledge. His mother argues that he has turned his back on her, and that Kryptonians are all “master manipulators.” She goes on to say that Kara and the Kryptonians are “vermin” and should be “exterminated”, which makes me think that she’s somehow in league with Zaar or at the very least supported his supposedly destroying Krypton.

Z’ndr is distraught, lamenting that she is not the mother who raised him. She replies that she is, to which Z’ndr bitterly responds, “Then maybe you should have left me to be part of ‘the natural order’.” His mother is livid, pointing out that she had saved him from death when he was a baby and then made him her heir. Z’ndr admits that he’s grateful, but nonetheless he believes his mother is wrong. She tries to drag him away with her, but the archaeologist won’t have it. She slaps him, and Krypto springs into action, burning off her arm with his heat vision. I think that Z’ndr speaks for everyone when he cheers, “Who’s the best boy in the galaxy?” The pair escape before Z’ndr’s mother can give chase.

Kara’s rage summons Zaar’s axe, and she nearly kills Splyce, who begs for mercy. Slowly, she comes to her senses, saying, “I am not a killer.” Primus warns her that they don’t have much time, and says that Splyce deserves to be dealt with by Hokum. On her way out, Kara sees the ship Z’ndr and Krypto are aboard escaping the warship, and promises to reunite with them.

Blaming herself for being unable to discover whether Zaar was responsible for her planet’s destruction, Kara is greeted by Ryand’r, Starfire’s brother, who suggests that she get cleaned up. On board his flagship, Hokum prepares to unleash his army of clones. The Omega Men and Supergirl travel to a rebel base in an asteroid belt. A robot confirms that the beings claiming to be Nimbus, Harpus, and Demonia—the fallen Omega Men—are a DNA match. Tigorr however is suspicious. Kara recognizes a strange scar on one’s neck. Later, she recalls that all the clones on Krypton had the same scar, and races back to warn her friends, but it is too late. The three clones are reinforced by an army of Supergirl clones.

This was a fun issue as always. The art was excellent, as was the general plot. Z’ndr remains intriguing. We found out that he was working against Kara, but his reasons aren’t exactly black and white. I still wonder if he is Brainiac 5 but was given another name when he was adopted. Either way, I can’t wait to find out what happens next. Andreyko continues to deliver an entertaining space adventure.

Summary
Kara and the Omega Men continue to battle Hokum and his forces, while Z’ndr gets a blast from the past.
Good
Bad
9.7
Amazing
Story - 9
Characterization - 10
Art - 10

Rebel With a Cause (Supergirl #27 Comic Review) SPOILERS