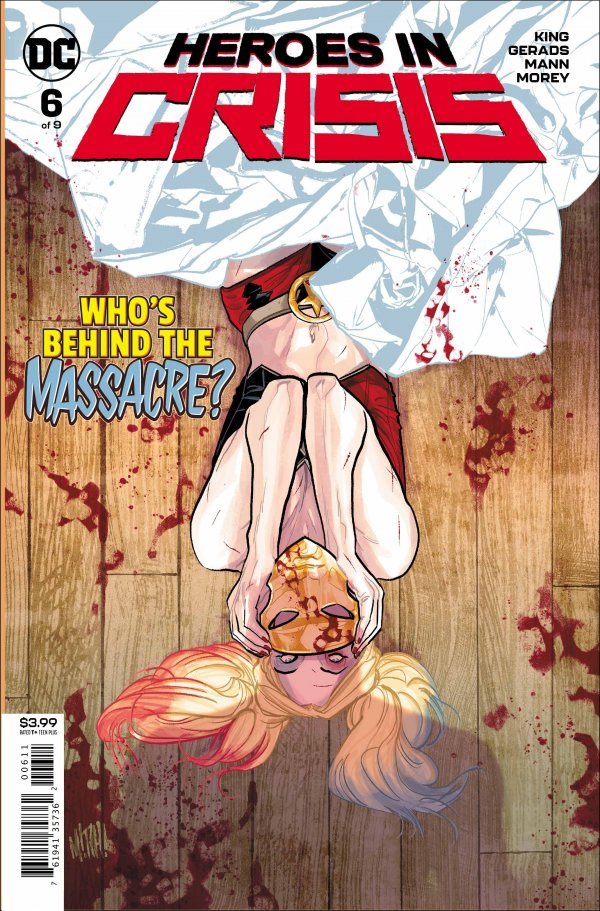 How Sanctuary functions has been something that has barely been touched on in this series, even though it is by far the most interesting aspect. When this series was sold to readers it was under the guise of “Superheroes dealing with mental health issues.” This would have been a really smart move. Grounding heroes in realistic ways make for better stories. We preach and promote diversity, which I happily applaud, but rarely try and push that beyond race and culture. Readers come from such a diverse base and they need heroes that can inspire and help them. Many people suffer from a wide array of issues such as addiction, anxiety, depression, and other issues. Having heroes that are dealing with the same problems could have been a really important comic, and helped many people. Furthermore, Tom King is not shy about dealing with his own issues through his writing. You would want a writer who is familiar with these issues on a personal level to handle them with care and respect. This issue is a giant double-edged sword. On one hand, we have a beautifully drawn and written issue that handles so many things with care and provides an empathetic look at our heroes. On the other hand, this issue stands out among a giant crossover that has pushed most of this real importance to the side. If only we got a series focused like this issue (and issue 3) called Sanctuary instead of jumping right into a “Crisis” event.

Story
The last time this series was brought into a flashback focusing on Sanctuary was issue 3. Like that issue it focuses on 3 character threads again; Gnarrk, Poison Ivy and Harley Quinn, and Wally West. Gnarrk’s is mostly about him waxing philosophical on different theories posed by famous philosophers. It is an interesting way to frame the comic as Gnarrk explains how he views society through the lens of his learning since he was thawed (for those who don’t know Gnarrk is a superhero that was a frozen caveman). He is using a simulation to relive his past during this narration. Poison Ivy and Harley Quinn use Sanctuary to “punish” a simulated Joker. However, most of their storyline is used on shining a light on their relationship. Finally Wally West is dealing with being without a home. Since he has “rejoined” the DC universe he has had no home. His wife doesn’t know him, and his children are nonexistent. Overall, this is a story about character far more than plot (which will be discussed further in the spoiler section below this review)

Tim’s Thoughts
I loved this issue. But this love is bittersweet. As I said earlier, it feels like a lost opportunity. Issues like this remind me that Tom King could have been better served creating a Sanctuary focused comic. With only 2 issues describing what actually went on in the clinic, it is hard for readers to care about or understand the larger story. Putting more salt in the wound is that these flashback issues (and this is 2 out of 2, no more after this) are by far the strongest of the series. While the main plot and mystery move at a snail’s pace in the other issues, this issue breaths actual life into the characters. Gnarrk is written highly intelligent here (outside of his speech pattern) and allows the reader to completely understand him in one issue. Poison Ivy and Harley’s relationship is written in a really fun and loving way and makes you want to see more out of these characters together in the future (more in spoilers on that). Finally, Wally is given the darkest storyline, but it makes perfect sense. King is consistent on one aspect across all his titles. His main characters are always madly in love. But Wally West is given a new life but without the love of his wife and children. He is constantly reminded that he is the symbol of “hope” yet the only thing that gives him hope in his life is gone. This is an interesting twist on King’s typical pattern. What if his lead character was madly in love but literally couldn’t have it? I admit this hits me harder as a husband and father. If I woke up and saw my wife and she didn’t remember me, and my children were never born, I would be just as mixed up as Wally is here. There are some implications made about him but I’ll save that for the spoilers later. King made me care about this series again, for now.

The other thing that makes this issue bittersweet is the art. Mitch Gerads and Tom King work together like no other pair. Anytime Gerads is on art duties for King his writing is elevated. Furthermore, Gerads is handling the material with maturity and care, unlike the main artist Clay Mann. Nothing makes this juxtaposition clearer than Ivy and Harley’s relationship. Mitch draws their embrace and romantic moments in such a way that focuses on the love and not the lust. Clay Mann was unable to draw a simple thing like Harley hugging Batgirl without making it a cheesecake pinup.  Every emotional moment is given the appropriate weight and respect. Gnarrk is shown as being primal and highly sophisticated, Harley and Ivy physically look like they are in love, and Wally’s isolation is shown through the art. Regardless of how the story plays out from here, this art will be missed.

SPOILERS
There are two main spoilers I need to discuss. These are pertaining to Poison Ivy and Wally West. It has become clear in future solicitations and storytelling hints that Ivy does not make out of this series alive. She even delivers the trope-filled line “see you in a sec” as she presumably marches to her death. I know there is a lot of talk about killing off a female character that has also been important to the LGTBQ community, and the handling of this can be problematic. At this point, I feel like the safest bet is to wait and see. If she does simply die here and nothing comes of it, other than a dead body, then Tom King is using her as a prop. Worse yet, this could be the most obvious plot twist yet. However, he could be bucking trends. Everything is so clearly telegraphed it seems that he could be waiting to subvert expectations. I can only judge this issue as it stands (which I truly like) but if he takes the lazy way out of this I will judge that when it comes. Wally West seems to be a far more interesting twist. More and more it is pointing to him being responsible for the deaths at Sanctuary in a major way. But, this issue reveals a different death for him than was seen in issue 3. Clearly, Tom King is not that forgetful and the two different deaths are signifying there could be multiple Wallys or something else of that nature. Thrown in the revelation that the body of Wally that was found had a mismatched time of death, one can assume some greater twists are coming. The plot and threats are moved forward in possible meaningful ways in this comic, which is refreshing to see after the last two stagnant issues. I just hope they are squandered or plainly obvious in the payoff.

Summary
This is a strong issue of Heroes in Crisis. But its strength is also its weakness. This is a story of two Tom Kings. One that has is creating an interesting take on Sanctuary and backstory, and another who is hampered with a slow moving mystery. Issues like this only highlight the amazing potential of what this series could have been. As it stands this is a peak in a sadly uneven event. I truly hope the last 3 issues take the revelations and character development created here and move with them.
Good
Bad
9
Amazing