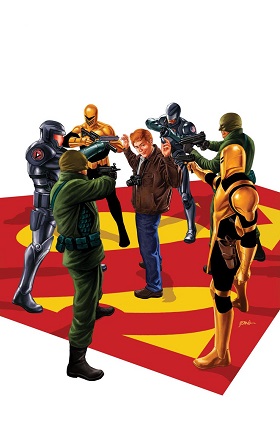 The story opens at the D.E.O.—Department of Extranormal Operations—where Director Bones has summoned Adam Strange. Bones wants Strange’s help since Supergirl is off-world searching for Rogol Zaar, but Strange first wants to talk about General Zod. Before he can, a shadowy figure appears within the building unannounced. Before anyone can identify the newcomer, the building explodes in a flash of blue light, much like in the previous issue. Luckily, Strange is able to rescue Bones and the others in the room.

Meanwhile, in Columbus, Ohio, Amanda Waller meets up with General Lane. She explains that someone managed to enter the secure facility her office is located in and tried to assassinate her. Waller is noticeably panicked, and she thinks that there has to be some sort of conspiracy in the works. As she points out to Lane, Kobra Cult was destroyed the previous night, she is unable to locate Task Force X (aka the Suicide Squad), and all D.E.O. servers are down. When she asks if someone got to Lane, he recounts that Lois visited him, and convinced him that he was going about everything the wrong way. Waller mockingly asks him if he too loves Superman. Instead of responding, the General states that she called the meeting of A.R.G.U.S. leadership, and asks her if she wants to investigate what’s happening, but Waller interrupts him, saying that she wasn’t the one who arranged the meaning. Realizing it’s a trap, the pair exit the auditorium. They order everyone in their path to evacuate the building, but it’s too late. Lane spins around and starts firing his gun at the blue cloud approaching them.

The scene cuts to Metropolis, where Clark, dressed as Superman, flies over the city with Lois. He is explaining the encounter he had with Waller in the previous issue as Lois takes down notes on her phone.

“I feel you’re writing my story for me.”

“I thought we were sharing the byline. What did I tell you about Amanda Waller? One of these days…” Lois quips.

I liked the banter here because it felt very in-character. Something that I’ve criticized in the past is how Bendis writes their relationship, but here it seemed more along the lines of what we’re used to, instead of drama for the sake of drama. Lois says that she doesn’t take him for granted, to which Clark immediately responds that he wasn’t close to thinking that.

“Ladies and gentlemen, the historic Daily Planet return of Lois Lane!” Steve Lombard announces. Finally. Lois has been absent from the newspaper that has pretty much been synonymous with her name since its inception, and seven issues and several months after Bendis removed her from her workplace, she’s back. The intrepid reporter passes by the desk of Trish Q (Bendis’s original character) and sees the headline of the article she’s working on, Lois in the Fast Lane? The article also features a picture of Lois and Superman.

Next, Lois walks past Robinson Goode—secretly the Red Cloud—on the phone with the Mayor’s office. She tells the cub reporter that the cubicle she’s sitting in used to be hers and to “give ‘em hell”. Robinson watches her walk away and then proceeds to tell off the Mayor’s representative over the phone, threatening to publish the story whether he gives her a quote or not, and smiles triumphantly once the person on the other end relents. I loved this moment, as it’s something that I’ve been wanting for months. I was glad to see someone who looked like me in the Daily Planet newsroom, but I found the prospect of Robinson just being a villain disheartening. Admittedly, I have no idea where the story is headed, but this brief exchange and the willingness of Lois to encourage a younger journalist of color, and Robinson taking her comment to heart, was great to see because we so rarely get to see how she encourages the next generation of reporters. I hope that this continues, and she does get to be a mentor to Robinson, instead of the two being pitted against each other.

Lois heads to her office, where she finds Jimmy hiding underneath her desk. The photographer is panicked, and he explains what happened with the Kobra Cult as Clark walks into the office. Clark asks him to describe the blue light that destroyed the building, secretly having witnessed something similar after saving Waller. The couple take Jimmy home, urging him to get some sleep.

Back in Columbus, Waller emerges from the wreckage of the building she and Lane were trying to escape. Their “A.R.G.U.S. personal field tech” protected them from the blast. She is clearly paranoid, suspecting that the attack must have come from an insider. Lane tells Waller that he knows of a safe house, but she turns on him and shoots him in the chest. He collapses, his vision blurring as a figure—likely the same one Bones and Adam Strange saw earlier—approaches him. His last word before the panel turns black was “Lois”.

In Metropolis, Jimmy has passed out at Lois and Clark’s apartment. Lois begins to tell Clark that she told her dad, to which Clark replies questioningly, “You told your dad what?” This was troubling, as I mentioned before, because this confirms my suspicion that she did not discuss revealing Clark’s secret with Clark, which makes no sense because time and time again in the past, she has chosen to guard her husband’s identity. At the very least, she would have asked Clark and Jon if they were comfortable with her telling Sam who they really were. This is another example of modifying Lois’s character for the sake of drama, and I find it disappointing.

Their conversation is interrupted as Lois receives news that something went down in Columbus. She also gets a text from a friend at the D.E.O. It reads, “I survived. Most didn’t.” Clark says he’ll go to the D.E.O., but suddenly he hears a crash. Enraged, he berates Amanda Waller as she walks through their front door. Her last words as the story concludes are ominous: “Sorry, Superman…it’s finally happened. All bets are off. It’s Leviathan. Leviathan is taking us all out!”

The art was excellent, and Epting’s style gave this issue almost a cinematic feel, which I thought was amazing. I was also very much pleased with the pacing of this issue, as it finally seems like things are beginning to happen. I was also very excited to see Lois Lane back at the Daily Planet where she belongs, and it was great to see her interact with Jimmy again. The banter between her and Clark was nice, but the prospect of her neglecting to tell Clark about her conversation with Sam driving a wedge between them is discouraging, as is Bendis’s ominous silence on the issue. I understand that drama often sells comics, but to tear down over twenty years of marriage for shock value would be a tragedy, and I sincerely hope that I’m wrong.

Summary
This issue was an improvement over the past, as Bendis manages to tell an engaging story reminiscent of a pre-Flashpoint comic, but it’s worrisome that Lois isn’t communicating with Clark for presumably dramatic purposes.
Good
Bad
8
Great
Story - 8
Art - 10
Characterization - 6

Alex Ross on Difference Between Marvel amd DC and the Legacy of Jack Kirby
April 3, 2018