In this column I will dive into times, throughout superhero history, that comics got political. There seems to be a constant debate if political discussion has a place in the medium. I hope to show that politics and superhero comics go together. This time we look at GI Joe: A Real American Hero and their 100th issue. 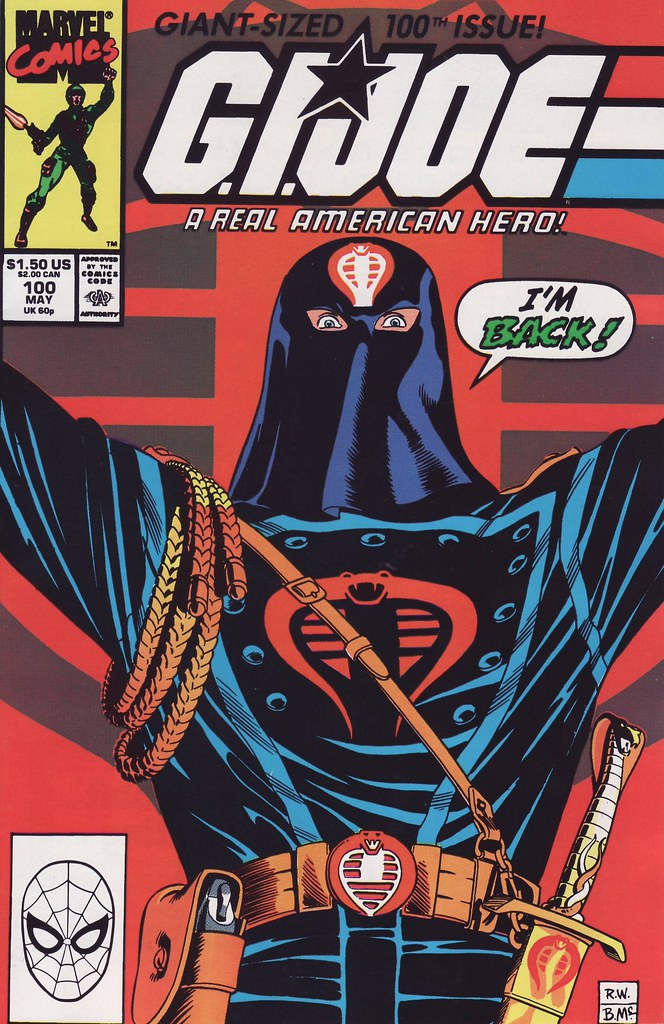 Marvel’s GI Joe
Marvel Comics has been a leader in the industry since the 1960s due to the way they handled the new Silver Age wave of comics. The Fantastic Four and Spider-Man really put them on the map, and those titles rocketed them to front runners in the comic book competition (overtaking DC in sales steadily since the late 60s). They provided outlandish heroes grounded in real world problems that connected to readers on a very personal level. Spider-Man was your average teen from a middle class family struggling to get by (and even dealt with poverty on occasion). The Fantastic Four were the family that dealt with interpersonal issues and played with new exciting scientific discovery that was capturing the imaginations of the world as a whole. I could go on and on, but it is impossible to think of a single Marvel title that did not deal with contemporary issues. What some might not remember, is that G.I. JOE was as important to the Marvel line in the 1980s as any title. In fact, for a period of time it was G.I. JOE: A Real American Hero that was the top selling comic (along with the constant Spider-Man). And even though G.I. JOE was a military action comic, it too played with the same issues that any Marvel comic did.

Larry Hama and GI Joe
Larry Hama was the main driving force behind G.I. JOE. He wrote a large majority of the issues (a few fill ins only) and even drew some of them. Hama had an idea for a main line Marvel book featuring Nick Fury Jr. and Hydra but was given the G.I. JOE license to work his pitch into. G.I. JOE was a “boy’s doll” that was being revived by Hasbro and they wanted a comic book (and soon a cartoon) to help drive toy sales. Larry took the license and ran with it. There is even an interview in which he claimed he could only plan “a few pages ahead” as Hasbro was constantly throwing new characters and vehicles they wanted featured in his stories. Yet somehow, the cynical cash-in became a commercial and critical success. You see, Hama was a war vet himself (Vietnam) and had a deep understanding of how the military worked. Furthermore, he brought a nuanced and intelligent understanding of the “military action” genre many writers could not. The work shows a massive amount of respect for the men and women who serve, but is not afraid to comment and critique those in power who use them as pawns in a political game. There are stories were the G.I. JOE team feels used for unnecessary missions. The main Antagonists (Cobra) are a largely white and fascist group that are created by a rag tag group of disenfranchised individuals looking for power in the worst way possible. All of this is wrapped up in a high octane action book designed to make young boys go out and spend their extra money on toys. But, reading this years late,r removed from the commercialization of the comic, it still reads as relevant as ever. This is most likely a series we will visit again.

Issue 100
This comic came out in 1990 but it is a relevant story that could be made today. Cobra Commander finds a depressed, presumably mid-western, town and takes it over. He promises low taxes, new services, and jobs in return for control. He even builds a wall around the town to protect them. He uses typical right wing rhetoric saying there will no longer be any welfare or hand outs but instead opportunities. When people question him he claims to be a true American who promotes free enterprise. While there are a few who oppose him (mainly a local veteran) most of the town goes along with it. Hama is clearly framing that fascist control comes not from the top down but from reliance from desperate people. Many don’t question going into the trailers to register their new ID, which actually hook citizens up to brainwashing machines. Of course Cobra Commander is a hyperbolic example of villainy through political control, but the allegory made here is not a subtle one. He is basically one step away from saying he will “Make the City Great Again.” Now, this comic was written well before any thought of a Trump presidency could be a reality (or what that would entail) but the playbook of the far right and those who want authoritarian power. If this comic was published today in the exact same format it would be seen as contemporary commentary.

Clearly Hama was not afraid to inject some political messages into his comic. What was, on the surface, a toy commercial featured a diverse cast of characters dealing with some heavier issues. This is a comic that was more than willing to go beyond the intended purpose and follow the same social messaging that Marvel was known for. If it wasn’t for G.I. JOE being warriors for social justice it probably would not be remembered today fondly.

They know you will not take them seriously…(First Strike #4 Comic Review)
September 29, 2017

How Many Ants have you Stepped on Without Noticing? (First Strike #1 Comic Review)
September 10, 2017