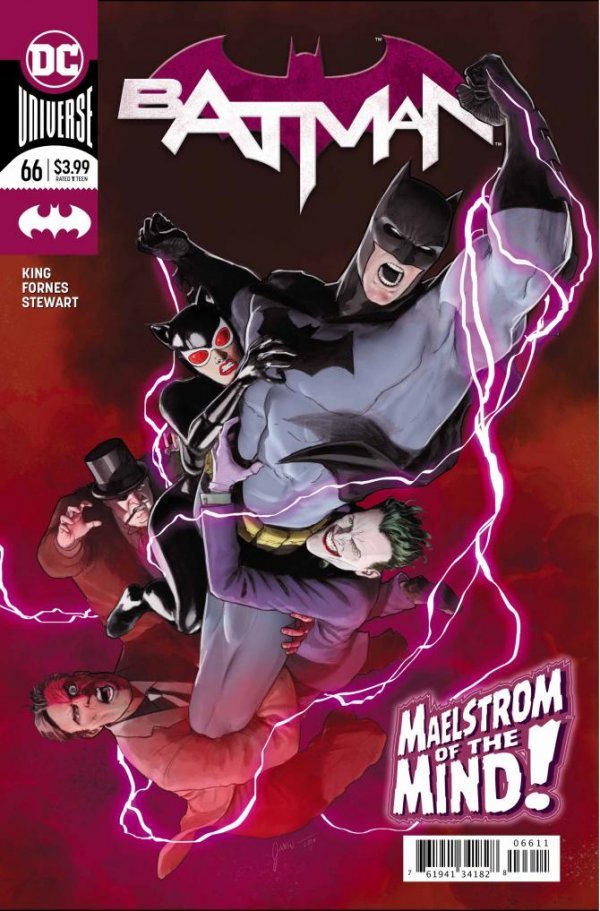 After a brief run of fill-ins the Batman title returns to Tom King’s arc “Knightmares.” A series of loosely connected one-shots that seem to imply that the issues may be unfolding inside Batman’s mind. Each issue being confusing yet intriguing, and playing upon a different strength and weakness of the character. The full story is promised to be revealed at the conclusion of the arc soon enough.

Story
This issue revolves around Catwoman speaking with The Question on the reasoning for her leaving Batman, and what makes Batman a great hero. A very simple issue that is far more about character development and analysis than plot. This issue builds up Batman as someone who fights on the promise of a vow he made to his parents, even showing him jumping into impossible odds along with Superman and Wonder Woman. Catwoman explain her relationship with Batman, and further explains why she left him. They get back into the letter she left him (in issue #50) and re-examine the reasoning there. Adding one more layer to the comic is the fairly clear evidence that Catwoman and The Question are simply playing out this conversation within Batman’s mind, hence the title of the arc “Knightmares.”

Tim’s Thoughts
The buildup and “payoff” of Batman’s marriage to Catwoman has been controversial, to say the least. Catwoman leaving Batman at the altar frustrated many fans, but I saw the issue as the smartest and most logical conclusion to that arc. This issue further justifies and solidifies Tom King’s choices. Catwoman’s relationship with Batman here is written realistic, beautiful, and tragic. Far more interesting than a simple and quick wedding would have delivered readers. Even more King shows his deep and mature understanding of Batman as a character. He breaks him down to his essence with showing how he is just a “man” yet somehow more. His vow he made to his parents, after they died, is what drives him. It is what allows him to stand toe to toe with Wonder Woman and Superman. Writers have spoken how Batman is actually more unbelievable than Superman, as he has no powers yet always finds a way to “win.” This issue somehow grounds those concepts and make Batman more inspiring and believable. Tom King is clearly on track to cementing his run as an all time classic, and issues like this really shine.

When dealing with a simple comic you need cleaner and simpler art. Jorge Fornes was the perfect choice for this issue. Each part of “Knightmares” has been drawn by a different artist and each one has highlighted the strengths of the issue within. Fornes captures the characters of Batman and Catwoman exceptionally. The page where Batman jumps into a battle, looking over Superman and Wonder Woman, is THE page. I feel like showing that single page to any writer and artist would clearly communicate who Batman is.

Summary
It is great to return to Tom King’s run on the title, and “Knightmares” is one amazing arc. A series of one-shots that really get into how Batman works. I feel this issue is the strongest yet, and a must read. I would even go further claiming that this may be one of the best Batman issues period.
Good
10
Perfect