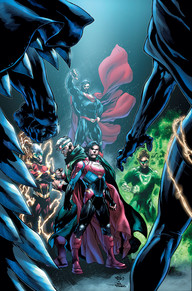 When we last left our Superfam, they were in the Bermuda Triangle Fortress of Solitude discussing how Jon’s summer vacation in space brought him to Earth-3, home of the Crime Syndicate. After a brief dream sequence, Jon continues his story from where he left off. He describes being held captive by Ultraman for an unknown period of time, and how difficult it was knowing that the face of his captor was the face of his father. 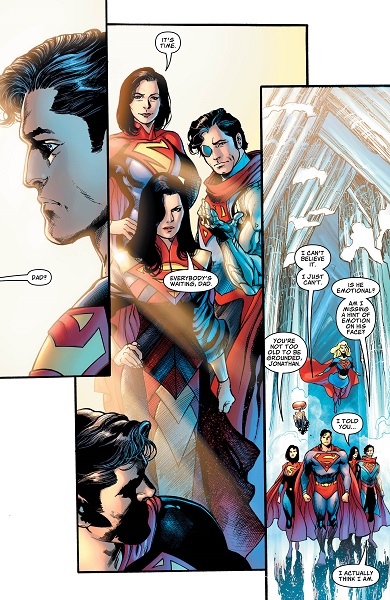 After eventually breaking out, Jon comes to realize that Earth-3 is nothing like his own, but despite being in a completely different world, he remembers what his parents taught him and tries to help others regardless of the negative consequences. He comes up with a plan to get back home by using the Crime Syndicate’s Hall of Justice, but before he can, he is stopped by a familiar face.

The art team is consistently killing it with this book, and as always, I was very impressed. I loved the transitions between the volcano on Earth-3 and the Fortress of Solitude, and how Ultraman was of course physically identical to Clark but so much more sinister.

The plot was engaging, but I’m not crazy about the idea of Jon being put through the emotional ringer of being held captive and abused by the evil version of his father. I imagine a lot of the trauma has been internalized, and it would be harrowing at any age but at the time he was only ten years old, and I know he can’t just be over it like that. I find the plotline disturbing, which was likely the point—and one that I personally feel was completely unnecessary—but I think that ultimately there needs to be a lot more time spent on him processing what happened, instead of suffering just for the sake of suffering.

Tonally, this is a huge departure from what we’ve seen from these books since Rebirth. Jon was a happy go lucky ten-year-old kid with his father’s powers and his mother’s knack for diving headfirst into danger to help other people. I loved that about him. That’s not to say all of that is gone, but in the context of Super Sons at least, the one with the dark and angsty aura about him was always Damian. Going through trials and overcoming them leads to character development, and I think that a huge part of watching Jon grow up is going to be watching him win battles such as these, but I would urge Bendis not to lose sight of the qualities that have made this newest Superboy such a success and such a joy to readers young and old.

I loved that he wrote Lois using “Smallville”, the nickname she’s known to call Clark, and I’m happy to report there was only one “baby” in this issue.

Summary
Jon is held captive in Ultraman’s volcano on Earth-3, and escapes to the Hall of Justice, only to be accosted by another blast from the past.
Good
Bad
7
Good
Art - 10
Story - 4
Characterization - 7

Pay no attention to the man behind the curtain, he’ll bore you. (Action Comics #991 Comic Review)
November 8, 2017