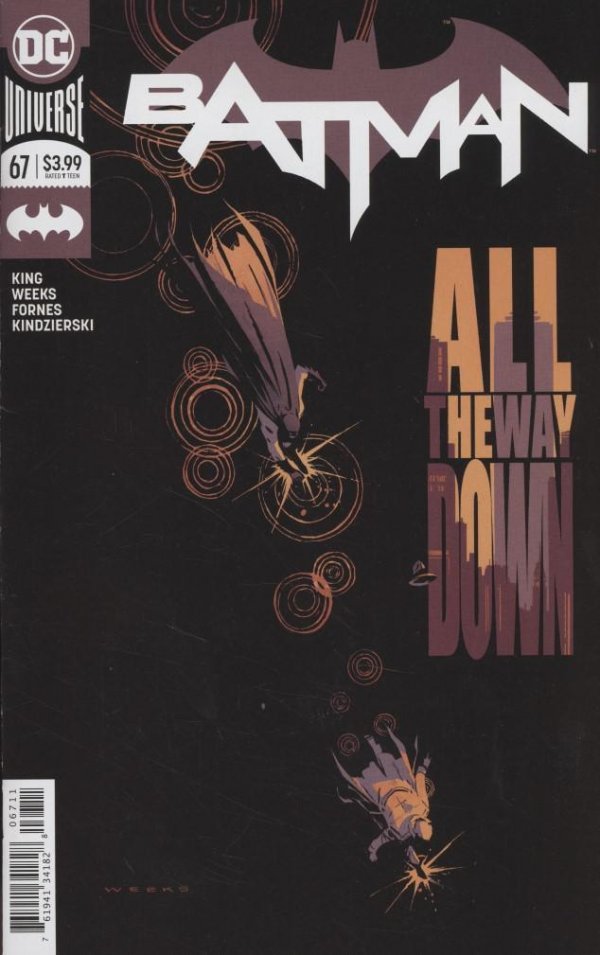 Knightmares continues, with the next one-shot in this journey through Batman’s mind (at least that is what appears to be happening). Funny enough, this comic connects to a previous Batman story that I never thought I’d see a continuation of. So in a way, it is connecting threads from two previously unconnected comics. What this connects to is far more fun without the spoiler.

Story
This story almost completely lacks any dialogue. For the most part, it is a silent issue, which works considering the genre King is playing with here. Batman is chasing a masked criminal through the city and comes across some familiar characters along the way, and they are not the ones you are thinking about. Really that is it, an incredibly simple story that is nonetheless engaging and fun.

Tim’s Thoughts
Tom King is credited as the writer here, but knowing his sparse scripting style Lee Weeks should also receive a credit for storytelling as well. King is known to work with some of the best artists in the industry and often writes things like “Batman fights ninjas” and allows the art team to fill in the blanks. Considering this comic is lacks dialogue I am going to look at the art and story as a whole, rather than two separate pieces. I already know many readers will get turned off from this book simply because it is a “fast read.” However, I feel if this book was overwritten it would go against the genre it is trying to emulate. Without going into too many spoilers this comic book is a cartoon. A simple chase cartoon of the one character trying to catch another (like Tom and Jerry). And thankfully, Lee Weeks art is more than enough to carry the book. I am pretty sure King could have given him one page that said “Batman chases a masked criminal for 20 pages” and we still would have gotten this brilliance. King does deserve credit for trusting his artists so much (easy to do when it is Weeks) and the nice flip of expectations at the end of the book. Personally, I loved this book and think it is a highlight of Tom King’s run. It shows his ability to create a wide array of unique comics that all fit together in his Batman narrative, and the Lee Weeks art is worth the price alone. Knightmares is quickly becoming one of the coolest Batman arcs yet and will become an essential trade collection.

Summary
Knightmares continues, and unlike many arcs in comics, I really don’t want this to stop. I could probably read a series of one-shots done by King and a rotating art team, all looking at a different aspect of Batman, forever.
Good
Bad
10
Perfect

Batman #67 Writer: Tom King Artist: Lee Weeks Colorist: Lovern Kindzierski Letterer: Clayton Cowles Knightmares continues, with the next one-shot in this journey through Batman’s mind (at least that is what appears to be...
0
Average User Rating
0 votes
Have Your Say!
Your Rating: 0
Submit
Write A Review