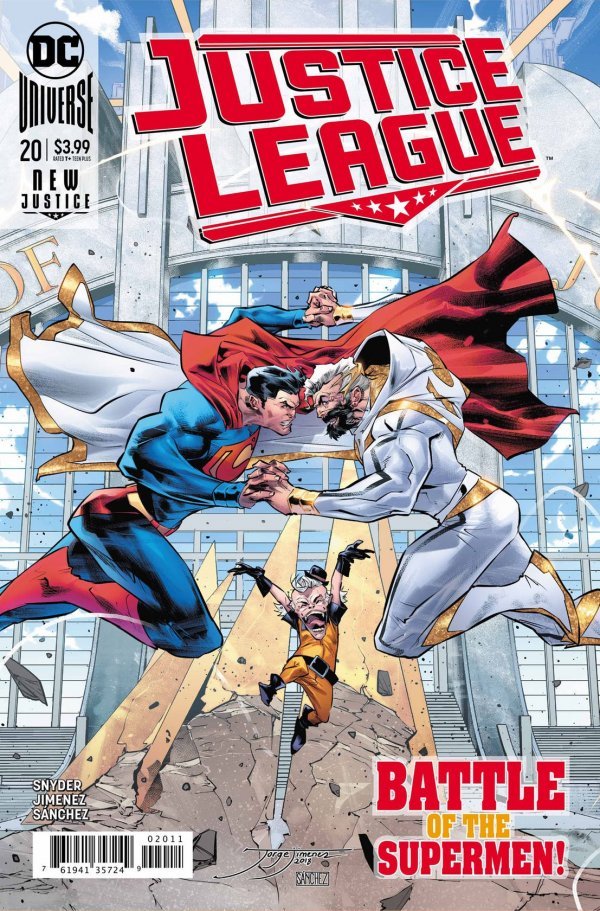 The Sixth Dimension storyline continues right where the last issue left off. The Justice League has met their future selves, shortly after Superman travelled to the sixth dimension to save the universe. Superman, however, is trapped in some dark place while the team visits “the future.” Clearly, things are not as they seem and this issue brings us deeper into the larger mysteries of the DC Universe.

Story
The main thrust of this story is the Justice League meeting their future selves. There was some kind of “war” that occurred that in the end led to worldwide peace. While there’s obviously something wrong here, we don’t get to see what it is quite yet. More about Perpetua and her plans are revealed here, and the DC universe’s origins and machinations are further explained. There are also some teases to what Mr. Mxyzptlk and the Legion of Doom are up to. Superman’s story is also given a brief moment but exactly what he is facing isn’t fully addressed.

Tim’s Thoughts
Scott Snyder and Jorge Jimenez deliver another excellent issue. The idea of future versions of characters is an old comic book trope, yet the creative team here pulls it off in some fun and unique ways. I don’t want to spoil all the twists and turns of what the future league looks like but everything has a good payoff that shows they really understand these characters. However, the best writing comes at Superman’s expense, trying to escape. With simple actions and narration, we completely see what makes him so inspiring. Through constant attempts, he never gives up or surrenders, and always pushes forward, even if he fails a little bit more each time. The most successful aspect of the writing here is that it doesn’t stay on one aspect too long. Multiple storylines are juggled in the air with ease and the pacing is perfect. It jumps from the future to exposition, to an amazing dream sequence, to darker elements and around. Rather than feeling exhausted and overwhelmed everything is just incredibly interesting, and I left this book wanting more.

The art again is perfect. Jorge Jimenez is one of the best artists working today, and I feel like this is some of his best work. I can tell he is having fun envisioning and creating entirely new future versions of the Justice League. Avoiding spoilers, he has now created the greatest Robin of all time. Another great choice would be his version of the future Flash, who seems to be phasing in and out between different versions of the character. The slight artist touches like that, tell so much more and feed into the larger mystery of the comic.

Summary
This Sixth Dimension storyline is the best yet for the series. Everything seems to have been leading up to this, and will most likely build on from here. Snyder is making the best Justice League comic since Grant Morrison’s JLA run. You really should not be missing it.
Good
10
Perfect

When Your Archenemy is Your Dad, Holidays Must be Awkward (Hal Jordan and the Green Lantern Corps #29 Comic Review)
September 30, 2017