Guardians of the Galaxy #3 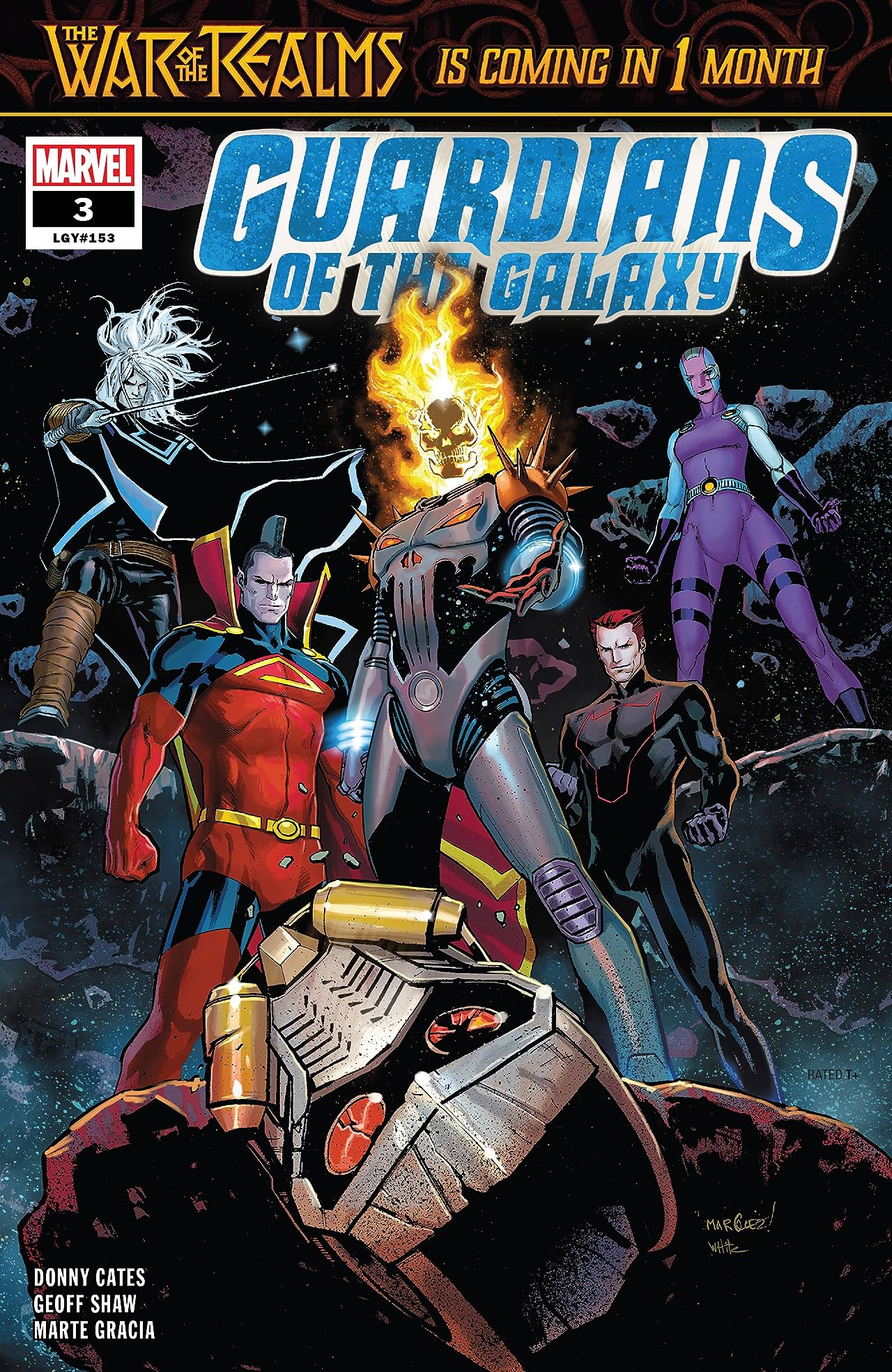 Currently, the Guardians of the Galaxy are split in two. One team is looking for Gamora in order to kill her. Thanos has claimed that after his death he will take over the body of another, and Gamora is the prime suspect. The other team is on a mission to save and protect her, even though Star-Lord is not interested in jumping into the action (he was killed by Gamora in the past, a big tricky comic book situation). Finally, The Black Order (who many will know from the recent Avengers film) along with Hela are trying to find Thanos’s head. They want to just resurrect him in his old form.

Story
Star Fox, who used to be the happy go lucky “Love God” is now becoming dark and twisted. His quest to find his resurrected brother has emotionally and physically scared him. The book opens showing us his turmoil and it is clear that his mission to kill Gamora is not the one the readers should be empathetic with. His team does find Nova (who knows the location of Gamora) and there is a fairly large confrontation. The Black Order is in The Negative Zone, an antimatter universe, and come across Annihilus. He does have Thanos’s head and Hela battles him for it. Finally, Peter Quill (Star-Lord) has his ship overtaken from his Guardians team as they force their rescue mission to go forward.

Tim’s Thoughts
This issue moves the pieces up the board but does not get into any big surprises or twists (except the last page cliffhanger). Donny Cates again juggles three plot lines with ease here. It was smart of him to give this issue some breathing room, as he allows each plot to develop separately here. Of course, all three will eventually crash together, but having issues like this allows for a better arc. Yet, he somehow avoids the pitfall of “writing for the trade.” The issue is clearly in the middle of a story but each little subplot here is tied up nicely. It reads just as well as a single issue. Don’t get me wrong, this issue is still full of action. Nova and his fight against Star Fox’s team and Hela’s battle with Annihilus are both satisfying to see unfold, and the stakes are clearly high. Some other great moments are how Cates handles the personal development of certain characters. Peter Quill is fully believable and empathetic. I understand why he wants to save Gamora but at the same time has to be dragged into doing so. Star Fox is slowly turning into a villain in many ways as his mission is clouding his judgment in what is truly right and just. My only issue is that Cates can write and develop certain characters, but leaves other half baked. As a new reader, there are still some members on the teams that have only had background roles, and their motivations are uncertain to me. Some I still can’t even name. Hopefully, in this run, he gives me a reason to care about everybody and not just a smaller core of the cast.

Geoff Shaw is having fun here, and I think this issue really gives him time to shine. The battle with Nova and Hela (two separate fight scenes) are incredibly well drawn. The sequential storytelling on display here is amazing. With team books sometimes it is hard to find a unified vision and aesthetic, but this seems to be no issue for Shaw. Everything just works in this book, even though it jumps from a diverse array of locations and cast.

Summary
The new Guardians of the Galaxy series has been a delight so far. In three short issues the stakes are clear, and this is a gripping arc. The only problem is may of the side characters have been left to the wayside and are completely undeveloped. I hope that eventually there will be a reason to care about everyone in this book.
Good
Bad
8
Great

What we require now is a bloodhound (Guardians of the Galaxy #5 Comic Review)
May 20, 2019

Guardians are family. No matter what. (Guardians of the Galaxy #3 comic review)