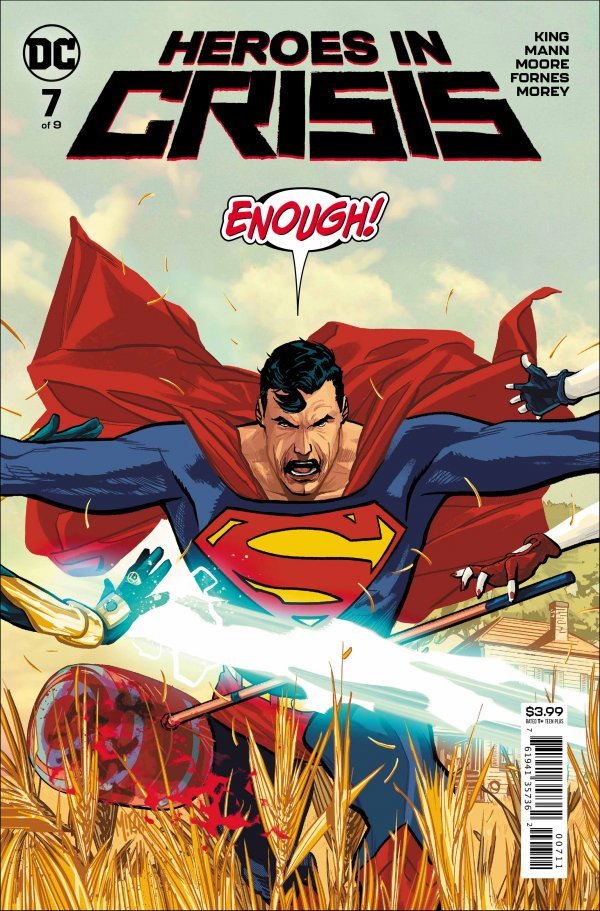 Coming off last issues flashback, Tom King (and team) returns to our main plotline. Harley and Batgirl have just tracked down Booster Gold and Blue Beetle, and Batman and the Flash are putting their detective skills together to figure out where Booster is hiding. There also seems to be something fishy with Wally West’s death that will come further into focus this issue.

The Story
The issue opens up and Wally West is alive… and, well…? (a no prize to who catches the reference there). He plants a flower while remembering his, now erased, wedding. There is a typical superheroes meet, then fight, then team up trope played out between Booster Gold, Blue Beetle, Harley Quinn and Batgirl. The moments with Batman and the Flash that are used have comedy but amount to nothing else. More happens but I’ll save that for the spoiler section.

Tim’s Thoughts
I am now convinced there are two Tom Kings. There is a Tom King who expertly plotted such maxi-series as Vision, Mister Miracle, and Omega Men and is currently writing an incredible run of Batman, that is one of the best ongoing books on the stands today (as our On Comics Ground Award can attest to). However, we have this other Tom King that is dragging the plot on this 9 issue series. We are now only 2 issues away from the conclusion and only now *maybe* our antagonist is revealed? Remember The Puddler? They mysterious force that seemed to have access to all the superheroes secrets. Well, don’t bother thinking about them too hard because they are nowhere to be found again. This is a simple mystery plot that is being dragged with filler on top of more filler. I get it, Tom King writes exceptionally witty and fun dialogue but it is now interfering with the overall story. We don’t need another issue of heroes standing around talking with each other, we need something to happen. King can plot a book, I’ve seen it. Before this, he was batting 1000 for me. Sometimes books don’t click for one reason or another, but I can still see how they are well crafted. This isn’t one of them. Even more frustrating is that this book started off intriguing in act one (first 3 issues) and the flashback issues have been great. I feel like we are still stuck in act one though after 7 issues now. I could have seen this series being condensed into 3-4 issues easily right now. This issue is just more filler with a glimpse of answers given. That was fine at the start, but now this is just a frustrating read. I know my gripes are different than most people. I know the death and destruction gets people upset, but that is not what gets to me. Go ahead and kill a character just make it worth it. Shoot Batman in the head (that doesn’t happen here), as long as the creative team makes it a compelling read I’m fine with that. As of right now, the deaths are not earned. The mystery surrounding their deaths has no payoff. This is not some groundbreaking “Crisis” event. More in spoilers, and go ahead and spoil yourself you are not missing much.

Tom King is blessed with always working with the best artists. But I did not want him working with all of them on the same 24 pages book. A consistent colorist (Tomeu Morey) did help, but the switch from style to style is not something I am happy with. Clay Mann should get credit for internalizing criticism and not over sexualizing every female character anymore. But, look at the credits for this book and you can already tell it is a mess of styles working together in such a small book.

SPOILERS
One worry I had was Poison Ivy would simply be dead. However, I basically saw this twist coming a hundred miles away. Ivy was dead, but seems to have returned as a plant based life form (possibly The Green helping out). However, the way she returns is the dumbest Deus Ex Machina yet. Flash (Wally West) zaps a flower. I didn’t know The Flash had magic flower zapping powers, and I am pretty sure it doesn’t make sense for his power set. And it does seem there are two flashes. This might have been a good thing to fully introduce two to three issues ago rather than dragging it out to the final cliffhanger here. Why is one of The Flashes evil? I don’t know. And neither will you until next issue, unless Tom King drags that out until issue #9 which I sadly believe is entirely possible.

Summary
If you look at my reviews of this series so far, you will see I had hope. That is all gone now. I will read the final two issues out of sheer curiosity, and if finally something happens. But as of right now this series is a trade you could probably skip. Nine issues that could have been told in four. I wish Tom King was given a Sanctuary title instead. As the only intriguing element, heroes dealing with mental health, has been sidelined for a slow moving and uninteresting murder mystery plot.
Good
Bad
4
Poor