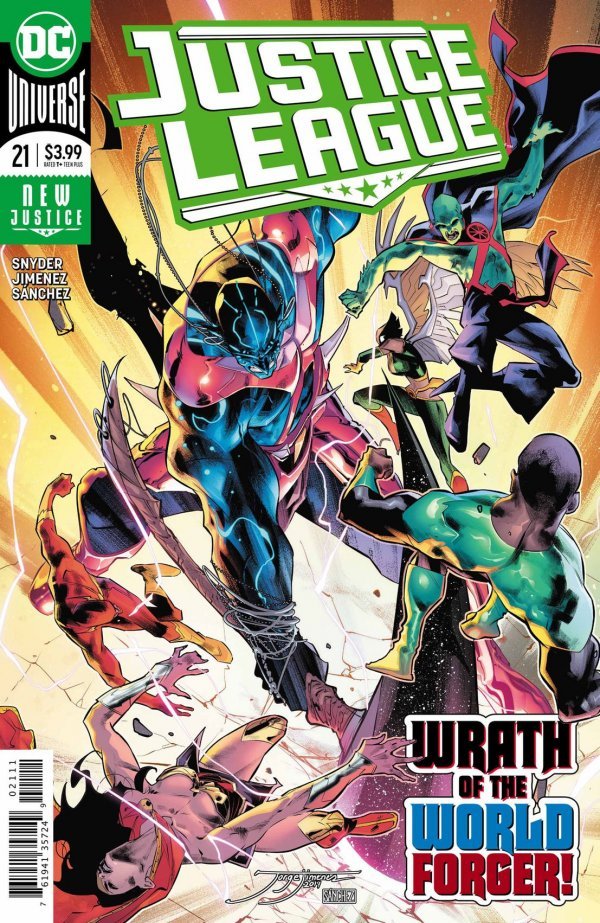 The story continues as the main team is in an alternate future, and Superman is trapped somewhere where he has diminished powers. To make matters even worse, Mr. Mxyzptlk is wreaking havoc back on Earth. In general things do not look good for our heroes. Even, though the core Justice League team seems to be in a future utopia it is clear that something larger is afoot.

Story
No time is wasted and some answers are given here. The future Superman’s identity is revealed early in this comic (but I don’t want to give it away). The comic revolves around the Justice League having to make a choice. This choice could lead to the utopic future they are living in, but it involves them locking up and/or killing anyone who *may* oppose them. Green Lantern equates it to taking POWs before a war even starts. Where they keep those that do oppose them is one of the main twists of the comic and leads to an interesting cliffhanger. There is some time spent on Earth with Jarro fighting Mr. Mxyzptlk and that also seems to be leading to some interesting places. Overall, this is another issue that is raising the stakes again on an already intriguing arc.

Tim’s Thoughts
Scott Snyder and Jorge Jimenez are on fire with this storyline. I fully appreciate that no mysteries are left to be played out to long. We didn’t need to dwell on who the future Superman is and the payoff is well earned here. However, they do not let the mystery to just end, as the add new questions with every answer they give. The final page has me asking some major questions to how they got to that moment. There is also some really cool meta storytelling with Mr. Mxyzptlk unmaking the universe. He is using his powers of the 5th dimension (which is imagination) to unimagine everything, taking the comic page back to pencils and blue lines. Beyond the plot the actual character work is amazing. Superman’s hope and determination is on full display and inspiring. Jarro continues to steal the comic with great comedic moments, and I can guarantee will be seen as a Justice League MVP by the end of Snyder’s run. The only issue I have is how Batman is handling the overall situation, as it seems slightly out of character for him. But, Batman always has a plan and Snyder has shown a understanding of the character like few others. So it is possible something more is up with his reaction here. Time will tell on that front.

Again Jimenez is knocking it out of the park. His splash page with Mr. Mxyzptlk unmaking the universe is easily the highlight. There is a great deal of the comic that centers around discussion and deliberation, rather than action. Even in moments like that Jimenez’s art is dynamic and engaging

Summary
Justice League continues into the best arc yet. While the series has had some misses, it is picking up steam here. Without a doubt this is a DC comic you should be reading, and Scott Snyder and Jorge Jimenez are putting out one of the best books on the stands today. The Sixth Dimension has been fascinating so far and I can’t wait to see what happens next.
Good
Bad
9
Amazing