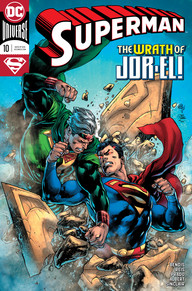 Last time, Jon was telling Lois and Clark what happened to him on his adventure in space with Jor-El. After escaping from a volcano prison where he had been held by Ultraman (the evil version of his father), he was ambushed by the evil doppelganger of his mother, Lois Lane. Naturally, both of his parents are concerned with Jon’s state of mind given the gravity of what he went through, but Jon puts on a brave face and is seemingly just fine despite the traumatic experience of being attacked by people who looked exactly like his parents.

This issue, much like the last one, is more of an expository flashback, which I think works quite well since we as readers have been somewhat in the dark since the beginning of this run. The ambiguity surrounding why Jon appears to be seven years older is fully explained, which makes the book worth picking up for that reason alone. Additionally, the art is excellent. The colors and vibrancy of each panel complements the cosmic level space adventure story that Bendis is telling. I particularly love the character design for this older version of Jon, because you can see a lot of Lois in his features. 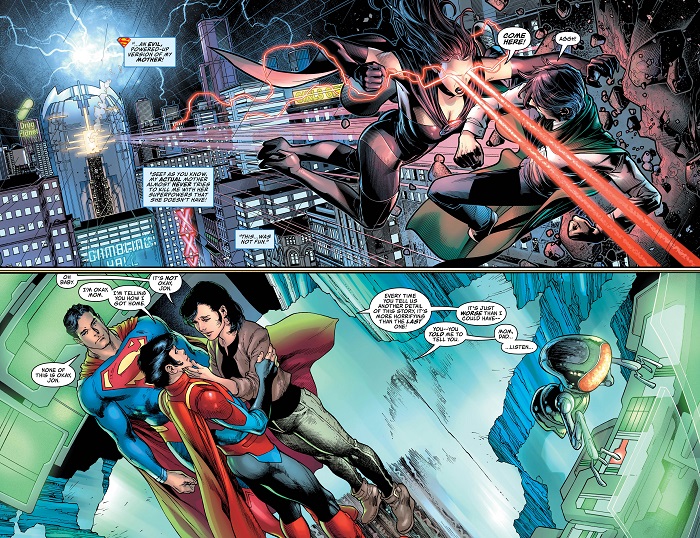 One of my criticisms was the decision to age Jon up from ten years old to seventeen, and while I still am disappointed, I do see the draw of having an older Jon in the Superman line. His personality thus far hasn’t really shifted fundamentally—he’s still a pretty upbeat kid (in some respects he kind of reminds me of Billy Batson), though I suspect that he’s holding some of his emotions beneath the surface for his parents’ benefit, which is something that I believe could be construed as in-character as his parents have both done this in varying degrees in the past. Nonetheless, I still hold out hope that we can one day see Superboy’s ‘lost years’ because it is important that after so many years, we got to see the Man of Steel and Lois Lane raising a child together, and that’s something that DC would do well not to throw away. Lois and Clark being parents advance their characters forward, and watching Jon grow advances his character forward—the aging essentially robs not only his parents the chance to see that growth, but the readers as well.

In summary, this was not a bad issue, as it answered a lot of questions that I know I had since last year when Bendis finished his miniseries. I’m interested in seeing how the whole Leviathan event plays out and the leadup to Greg Rucka’s Lois Lane book this summer.

Summary
Jon concludes his recollection of his time in space, and he and his parents make plans on their next course of action.
Good
Bad
9
Amazing
Story - 8
Art - 10
Characterization - 9

Get ready for the encore this May as Dark Nights: Death Metal takes the stage!
February 12, 2020