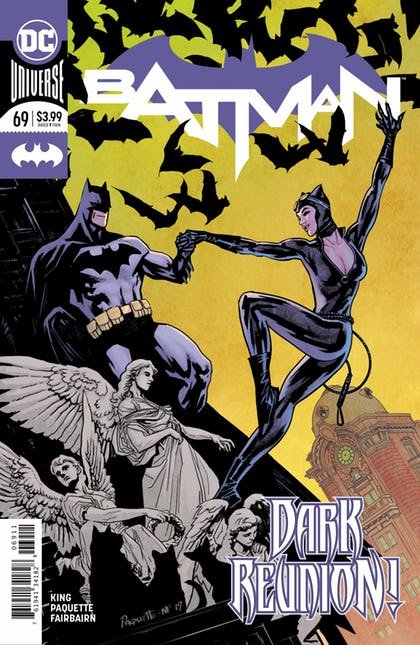 The interconnected one-shot arc is coming to a close here with this comic. This being the first issue of the arc to show what is happening outside Batman’s nightmares and also connects all the previous issues. After reading this book you will see how the “done in one nature” of each previous issue are more a whole story than previously thought.

Story
This story is in two parts. One part deals with Batman and Catwoman. Batman finally lets the reader know that he understands what is going on with him, and how to escape. The re-occurrence of Catwoman and the wedding is given deeper meaning here and again works to analyze their relationship. The other part of the story is a naked Bane fighting Batman’s father from the Flashpoint universe. It sounds ridiculous, and kind of is, but also hammers home why Thomas Wayne would work to harm his son. Bane has been the big bad behind many things that have happened in the series, under Tom King, so far and highlighting him again here shows how dedicated and intense he is. Overall, this comic ties many loose ends together and makes the entire Knightmare arc one whole.

Tim’s Thoughts
I’ve been pretty clear about my love for Tom King’s Batman work, and this particular arc, and this is one of the best issues yet. Many people accused King of not showing respect or understanding the Batman and Catwoman relationship, but this arc has show he has put more work into developing that than any writer I can think of. There are things explained in this issue that show that a simple happy ending at issue #50 would have been a cheap cop out, and the fallout of the failed wedding is far more interesting. Throughout this arc it has all been about playing on Batman’s greatest fears, breaking the character down and explaining what makes him work. Bane has traditionally been a character I have not cared for. A 90s XTREME character that “Broke The Bat” in one of the worst story lines I have ever read. He is the excess, grim, and gritty, that I just don’t typically care for. Somehow Tom King turned him into a compelling character (kudos to Gail Simone being the other writer to make me care for the character as well but Bane is a different beast here). In the Knightfall arc of the 90s Bane also sent Batman through a gauntlet of rogues, but it was cheap, tiring, and overall shallow. Here Tom King is having Bane tear Batman through a much different gauntlet, one that actually breaks him down in meaningful ways that shows WHY Batman matters. Also, Bane is naked fighting, which was kinda crazy and cool.

If I had my way Yanick Paquette would draw every comic. Seriously, this guy lays out a page like no one else. The dreamlike quality of this comic only plays into Paquette’s sensibilities moreso. The creativity on display here is unparalleled in mainstream comics. Tom King scripted the comic around a song, and Paquette clearly has fun with this idea. Musical notes are part of the scenery and Batman and Catwoman dance across the pages as if they were alive with the music. The “real world” scenes with Bane and Thomas Wayne have more traditional layouts, which only highlights the nightmare sequences further. Regardless, these action sequences still play off dynamic and interesting as Paquette can seemingly draw anything. I know how King scripts and it is quite bare and sparse, as he allows the art team to take the reigns and trusts them fully. There is no better person to hand these storytelling reigns over to than Paquette. And thankfully, Yanick Paquette is the only person on art duties here drawing this one cover to cover.

Summary
Tom King’s Batman will go down as an important run for the character. This Knightmare arc should be pointed at as to why he really gets the character. This is an essential purchase either in issues or in trade, and I can’t wait to see where the run goes next.
Good
Bad
10
Perfect

Batman #69 Writer: Tom King Artist: Yanick Paquette Colorist: Nathan Fairbairn Letterer: Clayton Cowles The interconnected one-shot arc is coming to a close here with this comic. This being the first issue of the arc to ...
0
Average User Rating
0 votes
Have Your Say!
Your Rating: 0
Submit
Write A Review