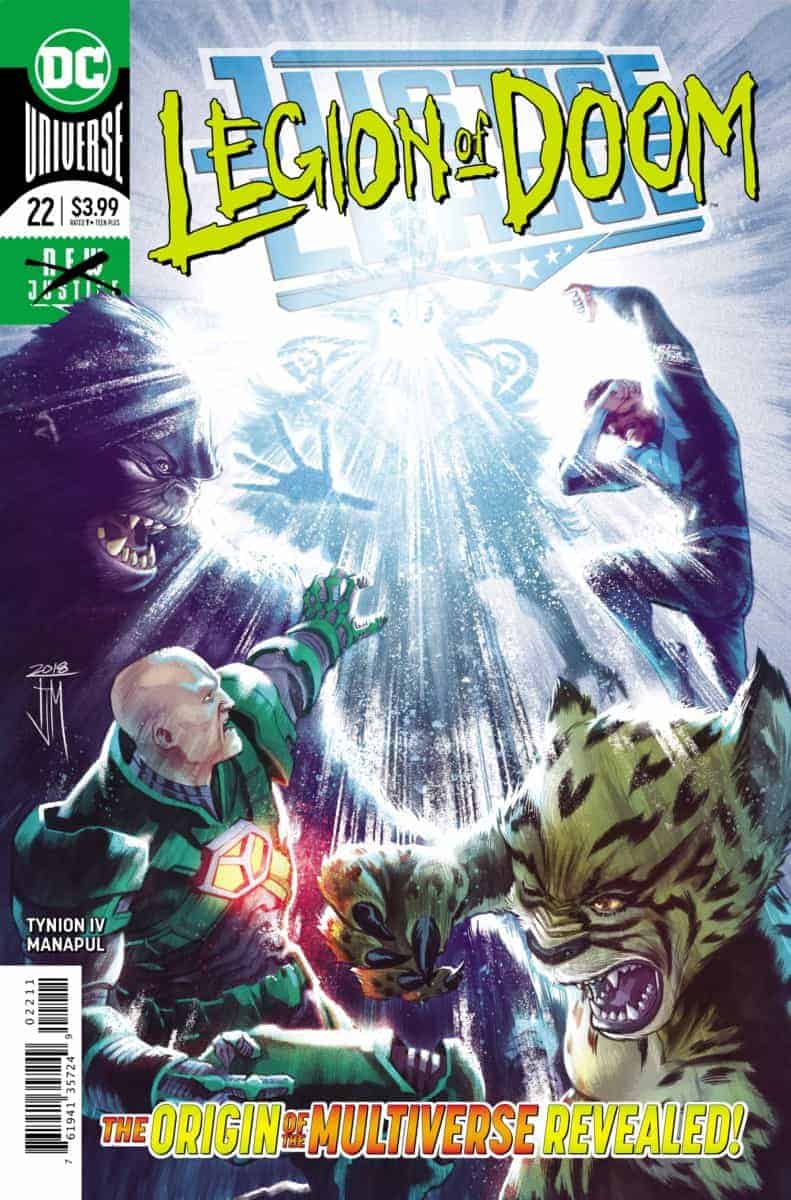 The Sixth Dimension arc takes a bit of a pause as James Tynion IV returns for his Legion Of Doom issue, a consistent sidebar the main Justice League title takes every few issues. As always this “one-shot” is still connected with the overall plot of the current arc, but explores more of the backgrounds machinations rather than getting in the main thrust of the A story. So while Snyder deals with the sixth dimension and the “future” Justice League, Tynion IV handles the past and history leading up to the event. Here he writes “The First Crisis” which essentially give a new origin to the entire DC universe.

Story
While there is a little snippet of the current day events, Mr Mxyzptlk unwriting the universe, the bulk of the title is the origins of the universe. We learn that Perpetua is a God that was in charge of creating a multiverse within a larger omniverse. The multiverse was originally laid out differently than what has been explained in comics before. Her three sons were all in charge of dealing with a different part of one giant whole. The world forger worked in the creativity of the dark matter creating all that would exist, the monitor oversaw the worlds that are created and helped prevent crisis from occurring, and the anti-monitor oversaw the boundaries of the universe keeping them free of life. Essentially overseeing birth, life, and death. Of course things do not go as planned and Perpetua ends up locked up behind the newly created source wall. I would go into explanation of the hows and whys but I think it is better read than spoiled.

Tim’s Thoughts
This is one dense issue packed to the brim by James Tynion IV. He mostly has a grasp on storytelling and flow to not get too bogged down in exposition, but it does happen from time to time. It is hard to escape some dragging moments when essentially rewriting and retelling the entire origin of the universe in less than 20 pages. There is just so much here the comic took me a couple reads to grasp all the moments and explanation of what was occurring. Not really a problem in and of itself, as a weighty comic has its merits, but I felt like at times it was boredom rather than confusion that took me away. This is not what I would call a boring comic, but it is far from a exciting one and I think it gets by on the art more than the writing. I do appreciate that the team here have not held cards too long and have been quick with providing explanations to the mysteries lately, and I know that dragging out Perpetua’s story longer would have been way worse. Overall this is an informative comic more akin to a DC Encyclopedia entry than a comic book. There are some legitimately great moments but overall this issue feels like a pause button on a groundbreaking arc. The World Forger creating Barbatos was a really cool moment and the glimpse of what the omniverse contains was a thrilling scene. However, I also feel like the Anti-Monitor’s reason for going rogue at the end of the comic was a bit of a stretch. We know he is a prime villain in the DC Universe and now his motivations are far more suspect than the force of destruction he was once sold to be. This is really a mixed bag of a comic book.

Francis Manapul is a wonderful artist and thankfully he saves this issue. He can make Gods standing around talking seem dynamic and fun. I think Manapul’s real strength is in his coloring. Everything has a soft texture to it and just makes it seem unique when standing next to every other comic on the shelf. This works in his favor as the build up to the creation of the source wall really seems outworldly. While this comic may drag at times his art never does. Like with Drowned Earth, he is the saving grace here.

Summary
An interesting sidebar into the origins of the DC Universe. This is a dense comic that will not have you at the edge of your seat, but will fill in some much needed blanks in the Justice League’s run. Not all choices seem to benefit the new status quo, but overall this comic shows one step back and a few steps forward. There is more to like here than not.
Good
Bad
7
Good