Guardians of the Galaxy #4 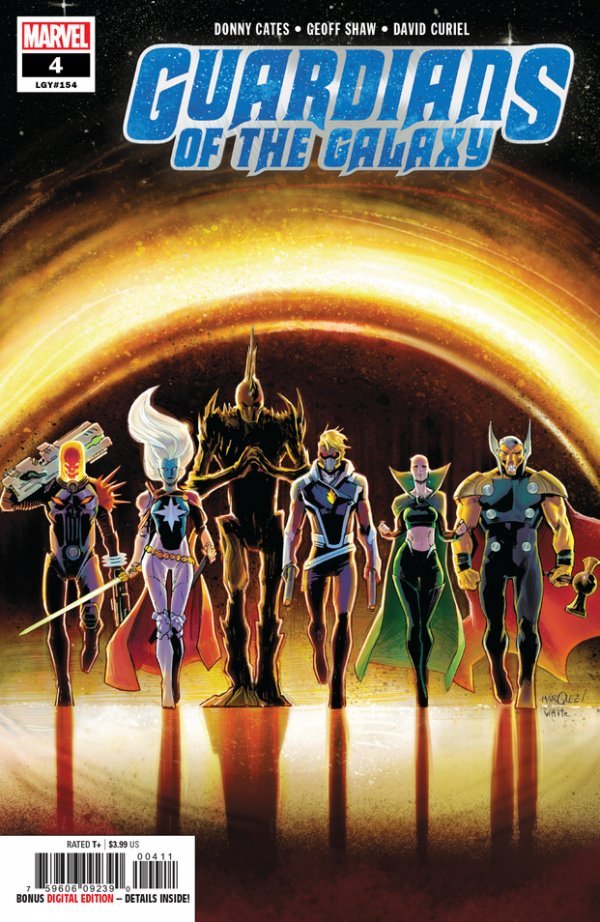 The collision course to find Gamora and Thanos have been the thrust of this first arc so far. Three different teams all working on different conflicting goals. The story of resurrecting Thanos takes a back seat in this issue, as the two opposing Guardian teams clash in this issue. One of them wants to save Gamora, while the other wants her dead. A fairly simple premise that has led to a nice and easy introductory arc so far.

Story
The Guardians, led by Groot and Star Lord, finally find Gamora. When Groot approaches her there is a warm moment that helps alleviate some of the stress that she may become Thanos resurrected. It seems that Gamora was looking for Rocket Raccoon. That thread is only teased at and dropped quickly, and most likely to be returned for a focused arc later in this series. When bringing Gamora back onto their spaceship Ryder, named after Winona Ryder), the team is attacked by the opposing guardian force. This is the team that was formed by Eros (aka, Star Fox aka Thanos’s brother) and features Cosmic Ghost Rider. That is really all there is to the story (without spoiling the final page cliffhanger). While there are been some set up in the previous three issues, this one is almost wall to wall action.

Tim’s Thoughts
I had a lot of fun reading this issue. I am still unsure who some of the team members are and why they matter, but the main idea is still easy to digest for new readers. Rather than a confusing turn off that team books can be, this book actually makes me want to know more. This is easily the simplest book of the arc so far as it only really focuses on two teams battling over Gamora. I loved the tease of things to come with Rocket Raccoon, and I appreciate it seems that Donny Cates is going to save his story for a time where it can breathe and receive the spotlight it deserves. Cates is able to easily explain interpersonal relationships in a single page. It is clear their is warmth and trust between Gamora and Groot, and the uneasiness between Gamora and Peter Quill. Again, these four Guardians comics have been the only ones I have ever read, yet the characters are clear. There are some characters I am still unsure of, but I don’t blame the writing for not going into it here. As this issue focuses on action and conflict, any exposition would really change the pace. Hopefully they will receive a spotlight soon though as anything outside the films is still lost on me (and most likely I am not alone here). The issue really ends in a way that justifies the intense nature of the book, and again shows that Cates knows how to weave character work and development into gripping material.

Geoff Shaw has had the chance to play with action in this title already, but this is one feels far more kinetic than the previous ones. The very few slower moments in the book, Shaw really brings to life the emotion and weight of the scenes. The embrace of Groot and Gamora is drawn in such a soft and impactful way, and then only goes onto highlight the frantic battles before and afterwards. This is a beautifully drawn book that shows Shaw can handle a diverse cast and script.

Summary
Guardians has been a great new pick for me. With zero knowledge of the cosmic universe I am still getting a lot out of this book. While at times I feel in the dark, none of those moments actually harm my understanding of what is going on. With only four issues in, this series is great for new and old readers alike
Good
Bad
9
Amazing

Flark me (Guardians of the Galaxy #4 Comic Review)

Guardians of the Galaxy #4 Writer: Donny Cates Artist: Geoff Shaw Colors: David Curiel Letterer: VC’s Cory Petit The collision course to find Gamora and Thanos have been the thrust of this first arc so far. Three differen...
0
Average User Rating
0 votes
Have Your Say!
Your Rating: 0
Submit
Write A Review