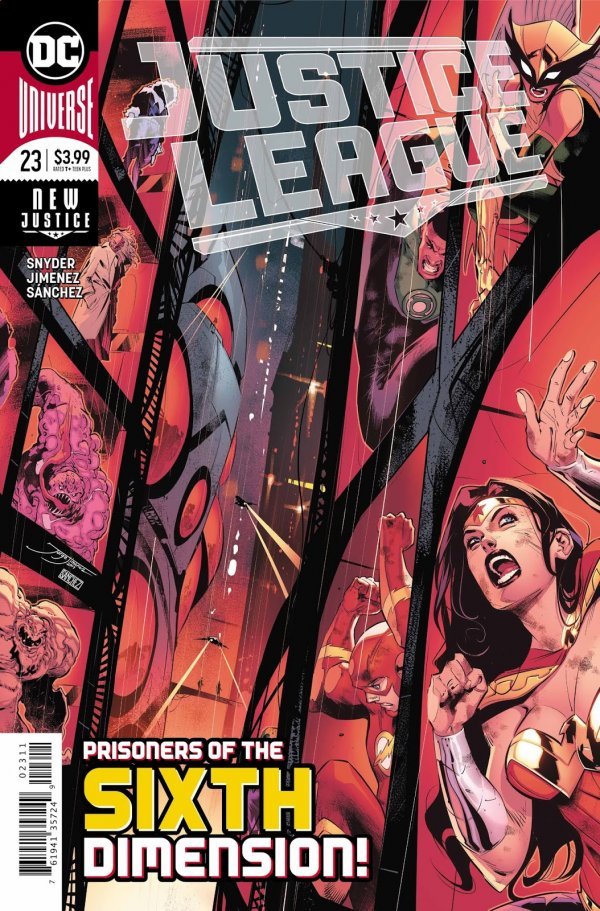 Last issue covered the history of the DC Universe and took a break from Snyder and Jimenez’s sixth dimension epic. Superman was imprisoned on a planet with very little sun light by The World Forger, who was masquerading as a future version of Superman. The Justice League, minus Batman, were sent to Apokolips to become prisoners after refusing to join in The World Forger’s plan. Since the source wall was broken, and perpetua released, the multiverse is on a crash course with an ultimate judgement. The World Forger’s plan is to create a utopian society by forcefully locking up every possible threat before they even cause a single problem. It is this that is creating a rift between Batman and the rest of The League.

Story
Superman is still trying to escape the planet. His neverending hope and determination are what bookends this comic. The future version of Lois Lane and Jimmy Olsen, who are guards on Apokolips, are unable to contain the League. With the help of Martian Manhunter and Hawkgirl’s future child they are able to bring down the prison. This leads to a confrontation with many alternate versions of famous DC rogues. This part of the issue has some interesting twists that are better seen than explained here. Finally, The Forger explains to Batman his ultimate plan and how the battling Mr. Mxyzptlk and Bat Mite fit into it. This is setting up Act 3 of this arc with some interesting things about to play out shortly.

Tim’s Thoughts
Again, this Sixth Dimension arc continues to impress me. Even with this being a “setup” issue for things to come, there were many moments that put a smile on my face. Snyder is showing he completely understands Superman as a symbol of hope. Superman is supposed to be who we could be at our best, and that is shown in spades here. The dycontomy of Superman vs. Batman here is a bit strange, and again Batman makes a choice siding with The World Forger that does not make sense to me. However, Snyder has shown his complete understanding of Batman in his groundbreaking run with the character and I hope there is a larger plan at play here. Every scene on Apokolips was just plain fun. I am a giant Fourth World fan and often find that most creative teams have no clue how to treat Kirby’s creations. Thankfully, it seem that Scott Snyder is a welcome addition to my very short list of writers I trust playing in that field. Of course he twists and turns many expectations of the setting, but they all work. Lois Lane Agent of Apokolips shouldn’t work but it just does. Every single issue of this arc has made me more excited for the next, and I believe that Snyder’s Justice League is going to stand tall in the history of the series as a whole.

I am a broken record, Jorge Jimenez can do no wrong. His art is incredible. Everything is so beautifully drawn, it makes most other books on the shelves seem lackluster in comparison. He is able to show the determination of Superman, an epic battle at Apokolips, a postmodern fight between Mr. Mxyzptlk and Bat Mite, and a simple conversation between Batman and the World Forger all with ease. He can juggle anything and everything in this team book that has multiple characters and tones while making it one complete whole. Jimenez is a master at his craft that somehow gets better every time I see his work. My only complaint is that he seems to be born to draw something as epic as a battle between two fifth dimensional imps undoing the world around them (literally into pencils and blue lines) and only gets one page for that. I hope we get to see more of Jimenez playing with that idea soon enough.

Summary
After watching Avengers Endgame this week, the Justice League comic is quietly putting out their own inadvertent reaction to it. It is every bit as time bending, fan servicey, and exciting as that film. If you are interested in the DC Universe at all you need to be reading this book.
Good
Bad
10
Perfect