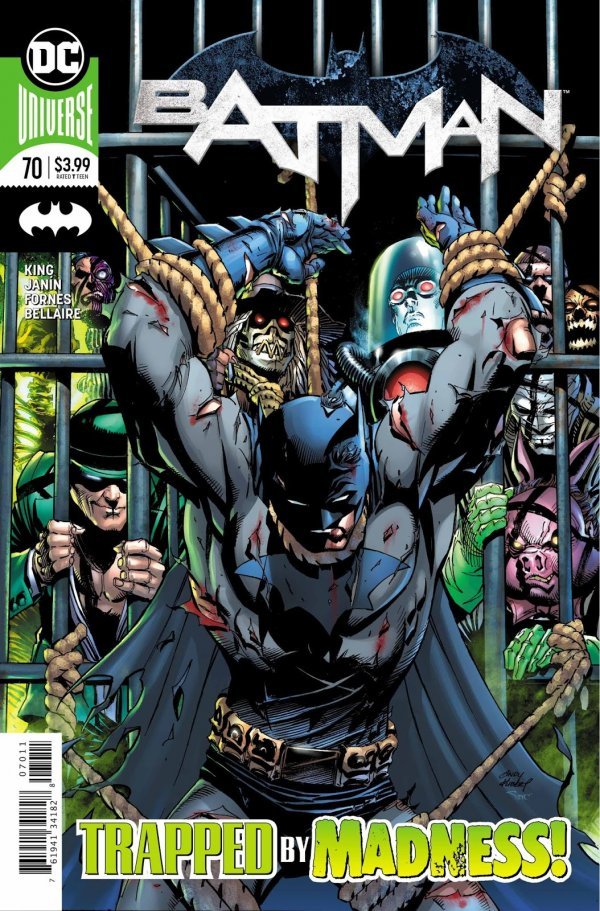 The Knightmares arc comes to an end here with this issue. Previously multiple one-shots in the series had seemed only vaguely connected. The last issue tied them all together explaining that Bane was using Scarecrow’s fear toxin to induce nightmares into Batman while he was captured. Batman was essentially in a perpetual dreamlike state and not knowing that he was trapped. Every issue covered one of Batman’s greatest fears, but more importantly examined the thesis of Tom King’s interpretation of the character. This issue is all about Batman breaking out of captivity and running a gauntlet towards freedom.

Story
This issue focuses on action and a quick gauntlet through Batman’s rogues gallery. Many villains are featured here but none more than a couple pages. After the deep existential crisis of the previous issues, this one is a release from that. The story can be summed up by saying, “Batman beats up a bunch of villains and escapes.” However, with Tom King there is always something more to what is going on. Bane is played as Batman’s foil and seems to have planned everything out as much as Batman typically does. You never see Bane in this issue but he does have dialogue, and it is clear the gauntlet and escape was part expected.

Tim’s Thoughts
I really loved the Knightmare’s arc, and I think this comic is a nice counterpoint. While I could read the philosophy behind Batman all day, I know that doesn’t really work as an extended arc. Having all those heavy issues conclude with a rush through Batman’s rogues was an inspired choice by King. In a page or two Tom King was able to give each villain their due and show why they are an important aspect of the Batman mythos. You could also see and feel the cathartic release Batman has taking out each of his captors. This issue felt like a boss rush in a Batman video game played out in comic book form. I traditionally don’t like comics that focus on action like this, but as part of the whole it worked. Every line Batman delivered had weight to it. His first encounter in the comic was with The Riddler, and the way it played out was perfect. It set the tone for the rest of the comic, you’ll know if this is the book for you after those few pages.

The art here is all amazing, but again it is too many people working on one short book. Give me a book drawn by Mikel Janin and Jorge Fornes any day of the week. However, put them together on one book and the switching can look jarring, to say the least. Compounding this is that there are no thematic shifts or scene changes in this story. It is a simple plot and needed one artist to tie it together. Suddenly seeing a drastic shift in art for no apparent reason made no sense to me. Nothing is poorly drawn here, it just does not come together. It is akin to having two actors you love suddenly replacing each other in the middle of a film for no reason. You might have no problem with their acting, but switching the style (regardless of quality) would not be a good directorial choice. The sudden shift completely stops the brisk pace this book needed.

Summary
Another great Batman book that is again hampered by having too many teams. Is it too much to ask for a singular vision in one 20 page book? Other than that, this is a perfectly written conclusion to a unique arc. This Batman book has been one if the DC titles to look out for and the recent Eisner nomination, for Tom King’s work on this series, is well deserved.
Good
Bad
9
Amazing