In this column I will dive into times, throughout superhero history, that comics got political. There seems to be a constant debate if political discussion has a place in the medium. I hope to show that politics and superhero comics go together. This time we look at Steve Ditko going from Spider-Man to Mr. A.

Time to talk about the Right
You may have noticed I lean a left on my political articles. One reason is because, in general, the arts tend to be more liberal. Therefore, it is easier to find left leaning comics and ideas baked into these comics. However, there are times political ideals from the right do bleed into comics. And while I am personally more aligned with the left wing comic books, and find myself agreeing with them, I am not afraid to support conservative creators that make groundbreaking work. Roy Thomas (of Conan the Barbarian fame) is a conservative and so is John Romita Sr. (easily one of the most influential Spider-Man artists ever), and I have enjoyed and own work from both of them. However, there is arguably no right wing artist who is further right and extremely influential like Steve Ditko.

Objectivism
Steve Ditko was an avowed Objectivist and a big fan of Ayn Rand (author and founder of the philosophy). The clearest example of how she viewed morality can be found in her most famous book “Atlas Shrugged.”

“My morality, the morality of reason, is contained in a single axiom: existence exists—and in a single choice: to live. The rest proceeds from these. To live, man must hold three things as the ruling values of his life: Reason—Purpose—Self-esteem. Reason, as his only tool of knowledge—Purpose, as his choice of the happiness which that tool must proceed to achieve—Self-esteem, as his inviolate certainty that his mind is competent to think and his person is worthy of happiness, which means: worthy of living. These three values imply and require all of man’s virtues…”

In general things should be seen in regarding your own self interest. She wrote a book called “The Virtue of Selfishness” which essentially argued that if we all look out for our own interests things will work out. Followers of Rand have a strong belief in laissez faire capitalism and limited government control. If I were to go deeper into Objectivism I would be writing all day long, but I believe you can see Ditko’s change in philosophy by looking at his time on Spider-Man and then his creation of Mr. A. Looking at these two creations are the perfect examples of how objectivism plays out.

Steve Ditko and Spider-Man
Ditko’s career is as lengthy as it is prolific. He was creating comics from the early 50s up until his death last year (2018). His most famous work being, arguably, the creation of Spider-Man. While he did not want to be known as the Spider-Man guy, and created many important comics since then, it is hard to shake off the legacy of that work. However, I feel like it is important to look at his Spider-Man work, because it is around that time he was transitioning into his objectivist ideals. It is no secret that Stan Lee did not create Spider-Man whole cloth and Steve Ditko had a hand in the story elements along with the art design. Spider-Man was created as a down on his luck, and selfless hero. The main thesis of the character is, “with great power there must also come great responsibility.” This is the antithesis of right wing thought. The idea that if you have the means you must help your fellow man. Spider-Man would cut a paycheck from taking pictures of himself, but still struggled with poverty regardless. Under the hard right leaning, and selfish, J. Jonah Jameson he was unable to get a fair pay for fair work.

Originally Spider-Man did not fight crime (for the first few pages of his first appearance). Instead he used his powers to wrestle and appear on TV. Without a doubt this display of power gained him more wealth than he’d see again for a long time. If capitalism and self interest are objectivist ideals than Spider-Man should have stayed as a performer. He wasn’t hurting anyone and was only promoting his own selfish interests. However, it was through allowing a thief to get away that was ripping off the same boss that was short changing our hero, that led to the death of Uncle Ben. Spider-Man learned that his actions have consequences and that he needed to turn away from his selfish attitudes in order to become a hero the world deserves. A hero that provides a free public service.

Later you can see Ditko’s objectivist ideals coming through with Peter Parker rallying against the protest culture of the 60s. This part always feels out of place when reading the Lee/Ditko issues.

With Great Power There Might Also Come Great Responsibility IF You Feel Like IT
Ditko did go on to write more objectivist comics. At times you can see some of his politics influencing his run on Dr. Strange (and amazing piece of work with some of the best Ditko art ever produced) and later going full force when working on The Question and The Creeper. But nothing shows his love for Randian ideals more than Mr. A. Mr. A is an objectivist hero writ large. He goes around speaking exclusively in philosophical lessons that could be found in Ayn’s writing. If Ayn Rand wrote a comic book this would be it. The focus here being the idea of good and evil in objectivism.

The main idea being there are moral absolutes, black and white only NO grey. If something is a “grey area” than it is evil since it has black. This idea goes further when we find out the criminal behavior in the comic is excused through his environment. You can clearly see the hard line right wing “tough on crime” message here. The objectivist view being we all have the power to thing and not be influenced by outside forces. If we truly are selfish than we should be able to think of ourselves. Things like poverty in Randian thought is seen as a symptom of the actions of the poor and not something that is the fault of society. While things like racism are “rejected” in objectivism they also refuse to see how the isolated communities can’t just raise themselves out of their own predicaments through their own power. You can see this explained when we learn about Angel (the antagonist)

The final message taught in Mr. A is the idea of serving yourself more than others. Mr. A can save a woman or the criminal. The woman does not want to make the choice and is shown as overly emotional (Mr.A is a bit of an MRA).  Mr. A saves the woman, he never intended not to, and allows Angel to fall to his death. As far as he is concerned his actions led to his death so why should he care? The funny thing is it seems clear he did have time to save both people, but not enough time to save both people AND try and convert a poor woman to objectivist ideals. Maybe he brought her to a bookstore to pick up the Fountainhead and Atlas Shrugged afterward?

Overall, something happened that made Ditko buy into Rand’s philosophy. And he used this right wing thought to make his comics politically charged and teach the reader about his worldview. Comics have always been political, and it seem impossible to point toward an architect of the medium that wasn’t interested in political discussion and thought. 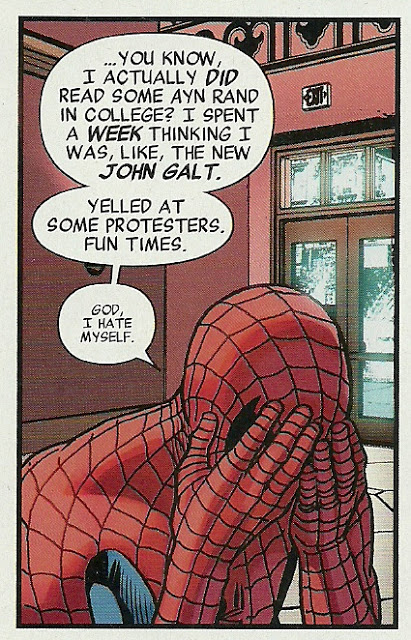 What Will Tomorrow Do To Yesterday? (The Amazing Spider-Man #33 Comic Review)
November 15, 2019