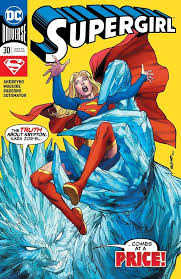 In our last installment, Kara fought off an ambush and discovered that her friend, Z’ndr, had been spying on her under the direction of his mother, Lord Gandelo. who is trying to kill her. Understandably enraged, the question remains—can Kara ever trust Z’ndr again? The Last Daughter of Krypton’s rage is in full display in the issue—justifiably—as she faces her companion’s betrayal and the being responsible for her planet’s destruction.

I thought that this was a great issue. Like the previous, it isn’t as fast paced, and is dealing more or less with the fallout of everything that has happened up until this point. It’s also important to note that this is the last issue before the upcoming crossover with Superman, so there are a lot of loose ends up in the air. This issue had a strong focus on Kara’s anger, and the art team did a fantastic job of showcasing that raw emotion.

I am optimistic that the overall plot with Rogol Zaar will be resolved, but I do think that it has been dragged out for too long. Introduced as a new big bad in The Man of Steel miniseries by Brian Michael Bendis last year, the villain is partially responsible for the destruction of Krypton. I am hoping that he will soon be apprehended so that Kara can move on to new adventures. Nonetheless, I am excited for the crossover, as it gives the Girl of Steel a chance to spend time with her super-cousins. One of the things I loved about Rebirth was Kara’s relationship with the Lane-Kents, especially given the fact that she didn’t get a chance to watch Clark grow up. I always assumed that she would watch Jon grow up, but that unfortunately remains to be seen.