In this column, I will dive into times, throughout superhero history, that comics got political. There seems to be a constant debate if political discussion has a place in the medium. I hope to show that politics and superhero comics go together. This time we look at Wonder Woman #203, the Women’s lib issue. 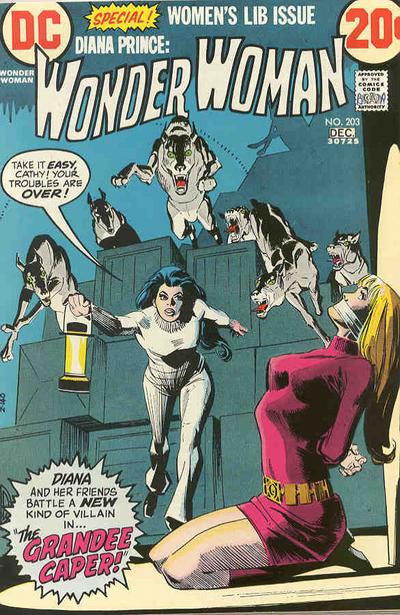 Wonder Woman and the Women’s Liberation Movement
We have covered Wonder Woman before and even in the golden age comics, it was clear she was a symbol of feminism. The cover of Wonder Woman #203 proudly proclaims “Women’s Lib Issue” but I’d argue that nearly every Wonder Woman comic is a Women’s lib issue. If it doesn’t explore feminist ideals I don’t understand the point of having Wonder Woman as a character, as it was William Moulton Marston and Harry G. Peter’s goal to create a strong female character for readers to look up to. Just before the issue #203 hit the stands DC comics went on reinventing Wonder Woman to more align with the Women’s liberation movement visually as well as in essence. Gone was the stars and stripes sexy outfit, and she was now given a more modern woman’s attire. In many ways, it made sense to at least ditch the overt American iconography on her costume as this was a time of protest of American Culture and the treatment of women. Even though her outward appearance changed they did not directly call out the women’s liberation movement on the cover until issue #203. Funny enough, just the next issue Wonder Woman returned to her former classic costume and the entire “new look” was ditched.

About the writer
Samuel Delany wrote issue #203 and was a well-known novelist (not a comic book writer). What makes him unique is he always explored the theme of sexuality and gender in his work. He considers himself gay but was in a polyamorous marriage at the time. Therefore he was a bold choice to take over Wonder Woman for an issue, but at the same time fit right into the sexual liberation themes of the golden age comics.

Synopsis of the comic
The comic starts with men accosting Diana Prince (as she is referred to more often than Wonder Woman here). These men are clearly being threatening and taking part in sexual harassment. Cathy, a woman who has just left a women’s liberation meeting, comes to Diana’s rescue. Of course, Diana can handle everything herself but appreciates the help. When they discover that one man dropped a note that was intended for Wonder Woman Diana decides to scope out what it is about. Strangely, it leads to a department store where the owner offers Wonder Woman a job for $1000 a week plus room and board. Wonder Woman accepts the position but later learns that she is being taken advantage of, and the department store is underpaying their female staff. When she joins in a protest and successfully closes the store down, the employees approach her and ask what will happen now that they are unemployed. While it stops on a cliffhanger, the next issue quickly has Diana reverting back to her old looks and forgetting about her time fighting for equal rights. It is a mess of an issue that had its heart in the right place but never got the conclusion it deserved.

Politically Charged
Often people say “Sure comics have political messages but they were never preachy in the past.” I think I’ve shown some clear example of overt political messaging that was as subtle as a jackhammer, but none are as “preachy” as this issue. All men in this comic are toxic. Even ones that seem outwardly nice are only doing so to take advantage of the women in the comic. Cathy’s apartment constantly has the background noise of a fighting married couple upstairs that highlights the mistreatment of women, and the unfair power structure assumed in traditional marriage

The owner of the department store is not just a misogynist ass, but also shows the dangers of capitalism. He is taking advantage of women in order to increase his profits on the backs of his female workforce. While he is going to pay Wonder Woman $52,000 a year and give her, an apartment, he later admits this is far below what an icon like that is worth as a spokesperson. He could not be more of the cigar-chomping fat cat if he tried. In regards to wages, this is the main thrust of the comic. Looking at the wage gap between men and women seems to be the main sticking point of the issue. The comic even breaks to give us a lesson on economy and law.

As stated before, the ending leaves us with a major question. When taking out these unfair businesses it also leaves these women unemployed. They were underpaid and taken advantage of, but in some of their eyes they at least had a job. I am sure that Samuel Delany wanted to explore this theme further but we never got the chance to see where that went. I feel like there was a chance to have an actual women’s liberation Wonder Woman comic that could have been collected in trades we still talk about today. Sadly DC pulled the rug and we will never know what that universe was like.