Guardians of the Galaxy #5 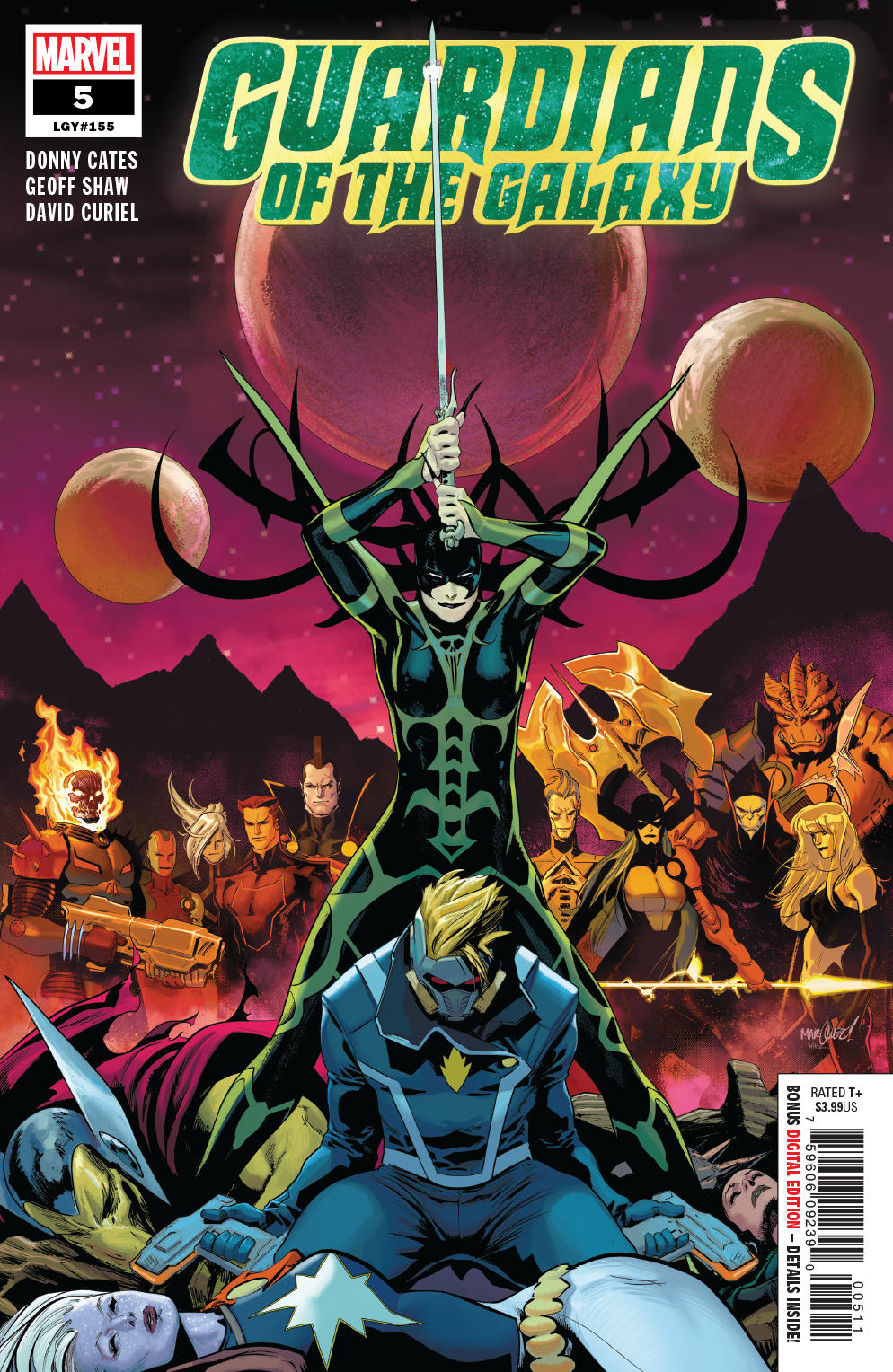 This comic has continued to revolve around three main story-lines. Eros is leading a team of his own to find and kill Gamora. After the last issue, they seemingly killed Star-Lord (Peter Quill) and took Gamora, who they believed will become Thanos reincarnated. Obviously, the main team is in dire straits but has found a new ally in Nova. Hela was leading a team of her own to reassemble Thanos’ body but they were nowhere to be found in the previous issue.

Story
This is the penultimate issue of the first arc, so many things finally come together here. All three main teams are relevant here and their final plans are laid bare. The cliffhanger of the last issue is resolved quickly and in quite a humorous way. In fact, a lot of this story plays with humor in the way current day Guardians of the Galaxy is expected to. There is one notable new addition to the Guardians line up that will make a lot of people smile. Hela’s team does come back here, to thwart Eros’s team, and their final plan is revealed. Without getting into spoiler territory their reintroduction into the arc is as surprising as it is satisfying. At the end of this issue, there is a clear path to the finish line that should be fun to see unfold.

Tim’s Thoughts
This issue takes a break from the action (mostly) and is a big set up for the finale. Donny Cates does a great job of keeping it interesting and engaging regardless of shifts in tone from the previous issue. He is able to plot out shocking moments both funny and frightening that will have the reader on the edge of their seats. I loved the way he deals with Peter Quill’s big dramatic death in the least dramatic way possible. The juxtaposition there lets you know this is a comic where anything can happen and it will be handled in unexpected ways. Thanos’ final plan is revealed here and it is a nice change of pace from the lighter first half of the comic. In a way, this is a comedy comic that slowly turns into horror. I have now been following Donny’s work and this comic is the best example of how varied his talent base is. He is one of the few writer’s that seems to be able to handle any genre thrown at him and is not afraid to mix things up and rewrite the rule book. However, I still have a major issue with this book. The large cast is still unexplained and slightly unfriendly to new readers. Sure the main cast here is all well known (if you follow the films) but this issue actually highlights some people that I have no clue who they are or why they matter. Phyla-Vell has a small moment here. She kind of pops up and sticks out like a sore thumb. I don’t know who she is or why she matters if it wasn’t for them calling her name I wouldn’t know that either. It is like a minor character grabbing the spotlight for a second with no rhyme or reason. Wraith (another character that has not been explained) shows up and has a longer conversation with Eros. This all revolves around Knull. I understand Knull has been important in Donny Cates’ Venom comic, but that comic has not been attached to this one. I feel like the entire scene plays out and can only be appreciated by people who are reading other titles. In a massive comic book universe crossovers and continuity is what makes it fun, but when the titles are not even connected it can be out of place and jarring. Overall these moments of confusion do not interfere with the main story but they do take me out of the book.

Geoff Shaw again should be praised for his art. Cates scripts a few surprise twists here and they hit because of how impactful Shaw makes it look on the page. Whether it is a punchline or a jump scare he handles the art duties with style. This is a massive cast in the book and everyone has clear personalities. It isn’t just Cates’ writing but Shaw’s ability to show personality with expression and body language. If you took out all the dialogue in this book you could still understand the important character traits of each person. David Curiel takes over coloring duties on this book and does a great job as well. People expect Guardians books to be loud, colorful, and exciting and he hits that in spades.

Summary
This first arc in Guardians of the Galaxy has been a lot of fun. Now that we are nearing the end of it I am exciting to see how it wraps up and what comes next. My only lingering issue is that there are still aspects of the characters here that are obscured for new readers. They are generally minor but there is very little reason to care for them which does hurt this as a team book.
Good
Bad
8
Great

Guardians of the Galaxy #5 Writer: Donny Cates Artist: Geoff Shaw Colors: David Curiel Letterer: VC’s Cory Petit This comic has continued to revolve around three main story-lines. Eros is leading a team of his own to find...
0
Average User Rating
0 votes
Have Your Say!
Your Rating: 0
Submit
Write A Review