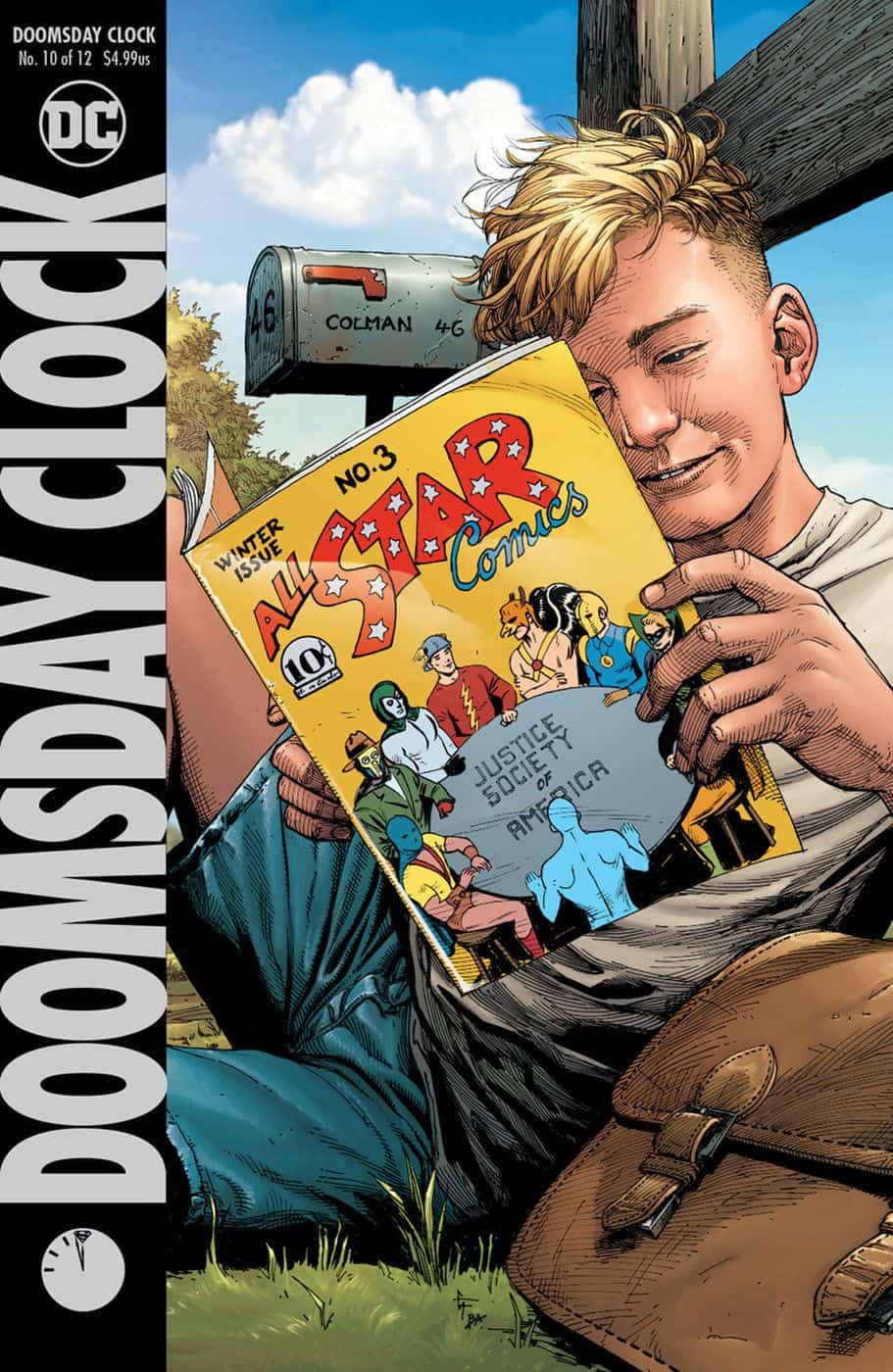 It is now common knowledge, to the reader, that Dr. Manhattan has been messing with the timeline. Previous issues have dealt with how the Watchmen and DC Universe have crossed over but it is this issue that really goes into how this all started. In many ways, you could read this issue as a stand-alone (which is good since the wait between issues is so long the previous one is not always fresh in your memory). This comic is all Dr. Manhattan and how he changed the world.

Story
Superman is the center of the DC Universe. This is fairly common knowledge as he is usually the lynchpin that shows up in every multiverse. He is the one that started it all with Action Comics #1 and kicked off the entire genre. Here Dr. Manhattan witnesses as Superman shifts from appearing in 1938 to later generations. He can sense the shifting timelines and can see how things shift and change out from under the world’s knowledge. Eventually, Manhattan decides to change things as well and can see the multiverse push back at him. He realizes that the multiverse is all connected to this one universe. By changing Superman here he changes things everywhere. This is why the JSA was removed from the timeline, as a simple and strange thought experiment played out by Manhattan acting like some emotionless puppet master. This story doesn’t fully answer the “whys” but gets into the “hows” of the overall story of Doomsday Clock

Tim’s Thoughts
Geoff Johns continues to impress me with this series. He has shown he is the master of retcons making anything work in DCs massive continuity. Not only does Dr. Manhattan work in this new timeline, but it explains the shifting timelines of the entire universe. Suddenly Action Comics#1 is canon again. In one comic Johns ties together how everything and nothing is part of continuity. He does all this to show how Superman is a symbol of hope and the linchpin of the entire universe while Dr. Manhattan is a foil. It is a great dichotomy that gets into John’s larger thesis for this series. Watchmen is an important story that deconstructed the superhero genre. The problem being it gave other’s tools to do the same without the know how Alan Moore had. Johns is using Superman as a symbol that has stayed tried and true throughout every event, every change, and every shift. A symbol of deconstruction vs. a symbol of never-ending hope and an archetype that cannot be broken. This issue also has echoes of the original Watchmen tying the two together and really selling this as a worthwhile sequel. As cheesy and unnecessary as a DC Watchmen mashup sounds, Geoff Johns has just made this work in such a way that it seems like an organic and important progression of Alan Moore’s previous work.

Gary Frank is the main reason this comic is late. Even a bi-monthly schedule is too hard for him to keep up with. However, if this is the quality of content that comes out from it I am not upset at all. The way he draws is a perfect extension of what Dave Gibbons laid out before in Watchmen. Characters look real and grounded. What he brings to the table here is a new layer of color and hope that the DC universe brings (unlike the off-color and depressing world in Watchmen). He is able to balance and highlight both these worlds and I could not see anyone other artist doing it the same way. While I am sure these delays are pushing some DC plans forward overall this book does not touch anything else. Doomsday Clock looks great and reads great every time we get a hold of it.

Summary
We have to wait between each issue, but when Doomsday Clock hits it lands hard. This issue actually works as a jumping on point as it stands alone. Any reader with knowledge of the DC universe and Watchmen will get this book. While the wait for the final two issues is long this will all be worth it. Doomsday Clock continues to be the must read series it was sold to be.
Good
Bad
10
Perfect

Why is he the center of the universe? (Doomsday Clock #10 Comic Review)

Doomsday Clock #10 (of 12) Written By: Geoff Johns Art by: Gary Frank It is now common knowledge, to the reader, that Dr. Manhattan has been messing with the timeline. Previous issues have dealt with how the Watchmen and DC Uni...
0
Average User Rating
0 votes
Have Your Say!
Your Rating: 0
Submit
Write A Review