In this column I will dive into times, throughout superhero history, that comics got political. There seems to be a constant debate if political discussion has a place in the medium. I hope to show that politics and superhero comics go together. This time we look at Forever People #3 and the introduction of Glorious Godfrey

The New Gods and The Forever People
When Forever People issue #3 came out Jack Kirby had just really started to dive into his new Fourth World creation for DC comics. The premise was simple the old Gods (Thor, Zeus, and the pantheon of ancient Gods) were dead and a new set of Gods have taken their place. These New Gods were placed in a sci-fi setting mimicking the changing times of the early 70s. Rather than heaven and hell there was New Genesis and Apokolips. New Genesis was ruled by a benevolent High Father and Apokolips was under the iron fist of Darkseid. The planets were in essence freedom vs captivity. The comic discussed in this article comes from Jack Kirby’s Forever people who are a group of young adults from New Genesis. These Forever People were direct stand ins for the flower children of the era and had a main mission to fight Darkseid’s forces on planet Earth. Already this comic becomes political when you realize that the flower children are essentially the “Social Justice Warriors” of the 1960s-early 70s. These hippies were a controversial force in American counter culture and Jack Kirby using them as protagonists proves a point on which side he stood on.

Glorious Godfrey and Anti-Life
A theme that runs through the entirety of Jack Kirby’s Fourth World is Life vs Anti-Life. Life is freedom and Anti-Life is restriction. Life is love and Anti-Life is hate. Darkseid is looking for the Anti-Life equation, as everything in Kirby’s New Gods can be tied to science, in order to wield it as a force to impose of the universe. The main antagonist in this issue is Glorious Godfrey, an evangelical of Darkseid’s teachings. Kirby pulls no punches and is anything but subtle when he opens the book with a sea of white followers accepting everything that Godfrey is teaching, punctuated by a quote by Adolf Hitler in the top left corner of the page

Godfrey uses scapegoats and other fascist and nationalistic tactics in order to control his flock. The important thing is that these are not Darkseid’s minions from Apokolips, these are average Americans willingly accepting these ideals. They submit themselves to Anti-Life and hate through the teachings of Godfrey. Glorious Godfrey himself is set up like a televangelist. This further cements the political commentary that Jack Kirby was proudly proclaiming. He was showing how the American public is willingly accepting messages of hate and propaganda as long as it comes with a smile and from a motivated speaker. Kirby had seen fascism and fought it first hand in WW2 and was trying to warn his readers.

The Justifiers
Easily the most haunting aspect of this book is the justifiers helmet. Godfrey even states that wearing the helmet will make you “superior.” Wearing these devices allows someone to give into anti-life and “justify” any action. One disturbing moment is the burning of a library 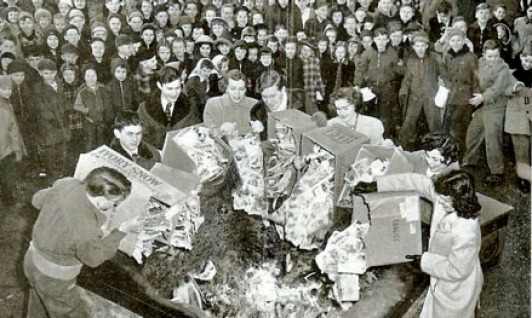 Kirby would have been familiar with this tactic on two fronts. One, it was a tactic used by the Nazi to destroy any material they felt would have been “damaging” to their cause and a way to erase Jewish literature and history. Two, more recently (less than 20 years prior) the American public were burning comic books in fear they would destroy their children and society. You can bet that some Jack Kirby comics were thrown into the fire. Justifier helmet literally blind people to the harm they are causing and create a tunnel vision toward fascism.

Looking at the comparison between Godfrey, Darkseid, life, anti-life, freedom, and fascism no one moment explains it all better than one of the most haunting and greatest pages in comic book history.