The first half of the book
Plot: Scott Snyder and Jorge Jimenez

The second half of the book
Writer: James Tynion IV 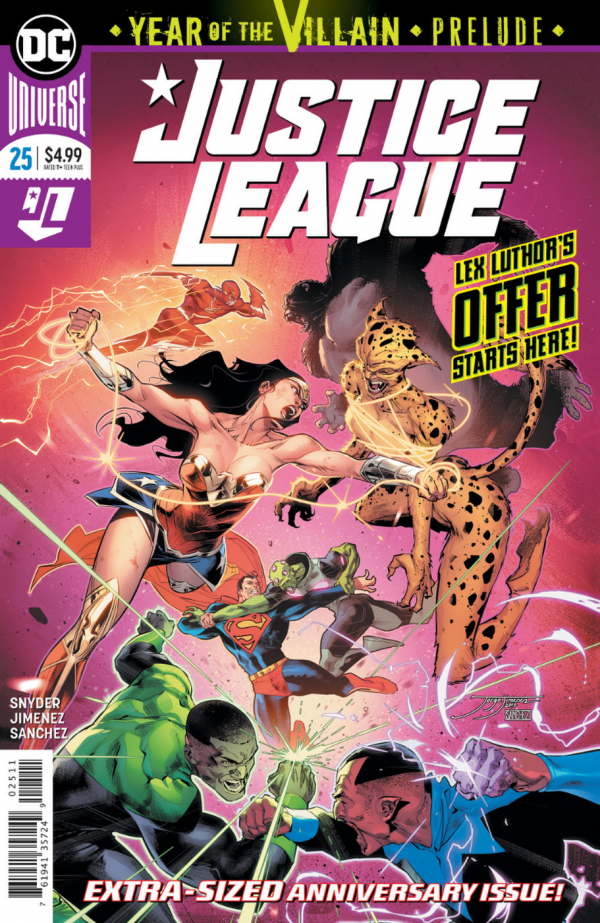 Justice League has now hit a milestone 25th issue, and with that comes a double sized comic. The book is comprised of two separate stories by two teams. The first concludes the Sixth Dimension arc. At the end of issue 24, Superman was still lost in space and dying, and the Justice League was about to face their future selves and The World Forger head on. It also looked like Batman was going to try and take on the league in order to bring forward the utopic future. The second half of the book ties directly into Year of the Villain. There was a special issue earlier this year that this comic essentially brings into the fold. Lex Luthor essentially convinced the world to become evil and ended up killing himself. It is more complicated than that and I suggest you read the special DC Year of the Villain issue and this comic to get the full story.

Story
The first issue is an action-packed conclusion to the main Justice League arc. All the pieces are in place and this leads to one epic battle. While this arc has been full of twists and turns this final issue does not focus on those. It isn’t a big spoiler to say that Superman does escape his prison (the continued Superman comics and his appearance in Justice League solicitations should tip the reader off that he lives). The method of his escape is one of the few minor twists in this book and is really a great and heartfelt moment. Once he leaves he confronts the World Forger and together with his team he is able to set everything right and save the present day (again not a spoiler as it didn’t seem like this new future was going to take over the entire DC line). The issue ends with one final major change to the Justice League that will get people talking after they put down the issue.

The second issue is essentially a retelling of the DC Year of the Villain Special. When the Justice League return from the future it seems they were gone for a lot longer than they thought. They are then filled in by Mera and Starman what occurred when they left. During the fight with Mxyzptlk Lex Luthor used Bat-Mite to save the world. Once he became “the hero” again he convinced everyone to give up on hope. Lex explained that the Source Wall is broken and the universe is ending anyway, so the public might as well become villains and have some fun. Luthor liquidates Lexcorp and gives his weapons and tech free of charge to the people that want access to it. Under this pandemonium, he ends up killing himself. Again, most of this was already explained earlier in the special issue. Even with that, this comic does help tie it all into Justice League proper and extends the story slightly, leaving on a cliffhanger that makes Year of the Villain seem more intriguing than it was before.

Tim’s Thoughts
Snyder and Jimenez’s finale is an amazing conclusion to the Sixth Dimension arc. When I saw something coming (Superman escaping and Batman NOT being a villain) it was done in a satisfying way. Superman’s arc in this book, in particular, has been a masterclass on how to write the character. I am being 100% serious when I say that this arc (and this issue in particular) should be required reading for anyone who wants to take on the character. Not since reading All-Star Superman have I seen a team so clearly understand what makes Superman an important character. The flashbacks are beautifully written, plotted, and drawn by the team here. The way Superman finds the conclusion is fitting and perfect. Batman was written as a pseudo-villain in this arc and at times I felt like it was out of character (even though I knew he had to be playing a game). The way that ties up does soften my earlier criticism of that aspect of the story and it will read much better in a trade format. There is only one issue I have with this book (and the arc as a whole). Mr. Mxyzptlk and Bat-Mite’s fight that was unmaking the universe is giving zero time here and was giving very little time in the previous issues as well. Every time we got a hint of it, it was exciting, cool, and unique with them actually unmaking the universe by stripping pages down to pencils and blue lines. I feel like it was a missed opportunity not having a bit more focus on that rather than relegate it to the background. Jorge Jimemez would have killed it plotting and drawing a battle like that.

The second half of the issue is a lot less action and more exposition, but it works in balancing the comic. Even though a lot of it was already explained in a different comic it was nice to get a refresher and make it all relevant to the series. James Tynion IV has been working closely with Snyder this whole run so the storytelling doesn’t miss a beat. He is not a fill-in writer, he is part of the team and it shows. Javier Fernandez somehow manages to keep up with Jimenez delivering solid and appealing art. Not many teams can be on the same comic with Snyder and Jimenez and not look like the B-team, but that is not suffered here. This second half of the book does an excellent job of moving the series towards its next big arc and I appreciate that it was rolled into issue 25 rather than slowing the pace down and making the next issue just be “set up.” It is a perfect another half to the coin that balances everything out nicely.

Summary
An oversized 25th issue does a lot right and very little wrong. This comic features an action packed conclusion to the incredible Sixth Dimension arc and also sets up how Justice League will tie into The Year of the Villain. Justice League continues to be one of the best comics DC puts on the stands today, and not since Grant Morrison’s JLA has the book felt so well executed.
Good
Bad
9
Amazing