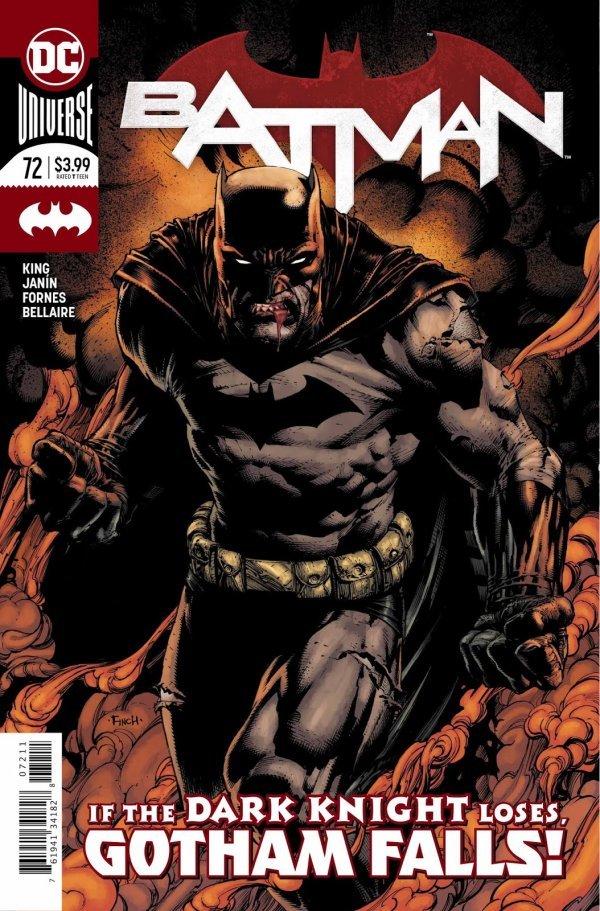 This comic may be the third part in the new arc but it really ties into every single issue preceding it. Events from the first issues with Gotham Girl, the first battle with Bane, Poison Ivy, The War of Jokes and Riddles, the time travel mishap with Booster Gold, and the controversial Catwoman wedding are all referenced here. Not everyone re-reads their comics constantly and it is here that Tom King brings together every single element of his long-form story so far and ties them all together.

Story
The story here is nearly all recap. In fact, the comic is written 100% in narration and not a single word balloon shows up. The recap of the previous 71 issues is told over top of a violent battle between Bane and Batman interspersed with two-page spreads that encapsulate each major story beat in the Batman series since Rebirth. The narrator is hidden until the last panel, but readers who have been keeping up with the comic will most likely know who it is. Basically, Bane has been behind everything from the start and this issue explains how he has metaphorically been breaking Batman. In the 90s Bane literally broke Batman’s back, but over the course of this series, he has been breaking his spirit. He lifted him up during the relationship with Catwoman and then started bringing him down when she left him at the altar.

Tim’s Thoughts
Tom King does a great job of tying his entire Batman epic together here. However, I am unsure if it is necessary for him to do this. While it is nice to get a recap issue and remind the reader what has occurred over the numerous issues (that would take a long time to go back and re-read) I feel like spending an entire comic on this was a bit of a stalling point. I am not a fan of recaps (and clip shows on TV were the worst thing on any series) but this one is well done compared to most that I have read or seen. It just seems like this could have been condensed and allowed for some forward movement in the story. To me, the metaphor of Bane breaking Batman was already clear, and explaining things to the reader is a bit “on the nose.” I get that in a story with years of material, and readers coming in and out, it is not a complete waste to over explain things. But, I wish it was done slightly differently. I do appreciate that this wasn’t just a Bane and Batman showdown and that King added narration to add meaning to the encounter. Overall, we have one of the best plotted and written recap issues I have ever read, but it is still a recap issue. I am looking forward to seeing where this can go now that everyone is caught up to speed.

Mikel Janin and Jorge Fornes share art duties again. This comic does separate their duties into thematically different aspects of the story. Fornes provides a visceral beauty to the Batman and Bane encounter. Janin provides art for all the splash page arc recaps and they really show how incredible his art looks. But great art should be able to stand on its own. While everything looks amazing if you took the writing away you would not have much sequential storytelling here. There would be a Bane fight with strange breaks into beautiful and unconnected splash pages. The writing is able to tie things together but the issue has a detached feel regardless.

Summary
If you need a refresher on Tom King’s Batman run this issue will get you up to speed. There is little forward momentum here as King pauses to explain himself before entering the last quarter of his run. As recap issues go this is one of the better ones but still falls for the same pitfalls that those comics usually do.
Good
Bad
8
Great

We can figure it out together (Heroes in Crisis #4 Comic Review)
January 2, 2019

You lift him up just. Just to bring him down (Batman #72 Comic Review)

Batman #72 Writer: Tom King Artist: Mikel Janin and Jorge Fornes Colorist: Jordie Bellaire Letterer: Clayton Cowles This comic may be the third part in the new arc but it really ties into every single issue preceding it....
0
Average User Rating
0 votes
Have Your Say!
Your Rating: 0
Submit
Write A Review