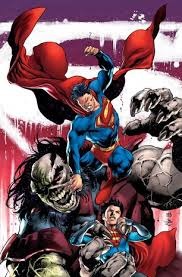 In the last issue, Clark, Jon, and Jor-El were in the midst of a space battle when they were ambushed by Rogol Zaar and General Zod. Kara flew into the fray on the last page, and this issue picks up from that moment. Kara, who has been traveling around the universe searching for clues about Krypton’s destruction, took a detour on her book to help her cousins out.

The family team up to take on Zaar and his band of miscreants from the Phantom Zone, all hellbent on revenge on the House of El. It makes for a pretty good plot on the surface—all four members of the House of El having to contend with the prisoners from the Zone who, of course, blame their captivity on Jor-El and his family. Unfortunately, this was only a small piece of the storyline.

The art in this issue was great as always. I particularly liked the panel where Krypto reunited with Jon. The dialogue between Kara and Clark was good, but I had hoped that there would have been more interaction between them than what was seen in this issue. I am not a fan of how everyone save for his parents seems to be treating Jon like an adult—he may have aged outwardly to a teenager, but he is most certainly not an adult, and shouldn’t be treated like one.

A lot of this issue felt like filler, and I presume that Jor-El will finally get to explaining things fully to Clark and the audience in the next issue. The plot has been slow in both this issue and the last, and I’m very much hoping that the situation changes in the next installment.