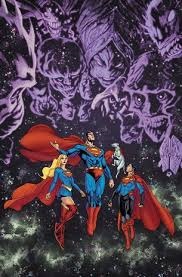 Last issue, Kara unleashed her anger on Gandelo for destroying Krypton, but was called away to a space battle that Clark and Jon had stumbled their way into. This reunion was one that was long-awaited, and it is the first time Kara has seen either of her cousins since embarking on her journey to learn the truth about Krypton’s destruction.

I really enjoyed this issue. It essentially covers the same events in this week’s Superman #12, but from Kara’s perspective instead of Clark’s. I happen to think that Andreyko writes an excellent Jon Kent, and there’s a comment that he makes when Kara points out that he has stubble that I really liked: “I spent my formative years trapped in a deep hole surrounded by lava. And I’m not being Freudian, either.” Now, normally I would question the realism of Jon (who was ten, but somehow through time and space physically aged seven years) knowing anything about Freud, but this is Lois Lane’s kid, so for me it worked.

I also really appreciated seeing Kara’s reluctance to encourage Jon’s chutzpah, knowing that he’s still just a kid and Clark, his father, naturally fears for his safety. I love any moments where we get to see Kara taking on the older cousin role with Jon, since it is something that she missed out on with Clark.

The art in this issue was great, and I thought that even though not much happened, there were plenty of excellent character moments for Kara. Watching her sort through her rage and use it to her advantage without seeing her consumed by it was a really interesting contrast between her and Clark. Zaar’s axe embraces her because she is literally mad as hell, but unlike him, she uses her anger for justice, not genocide.

I’m excited to see where the story leads in the next installment.

Summary
Kara reunites with Clark and Jon, and together they take on Rogol Zaar.
Good
Bad
9.7
Amazing
Art - 10
Story - 9
Characterization - 10