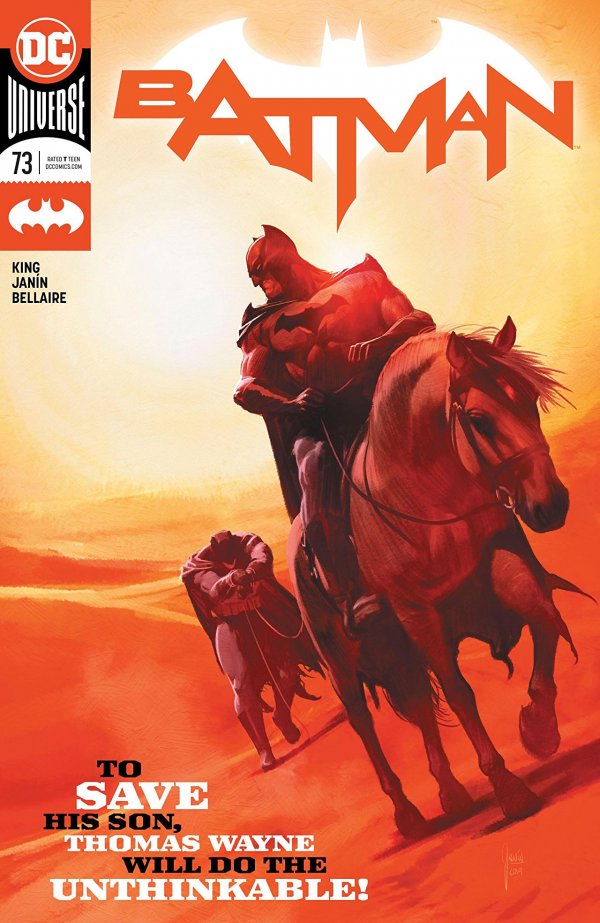 The Fall and the Fallen has been an interesting story so far. Bane’s plan to break Batman is coming together, and the last issue tied together the previous 70+ comics to this fact. While some of the previous issues have jumped back and forth from past to present, and at times it is hard to tell what is really going on, this issue is far more straightforward. Thomas Wayne (The Batman from the Flashpoint universe) has been featured in a minimal capacity in the series so far, always lurking in the background, but here his full plan finally comes into place.

Story
This comic has a simple premise, Batman is a captive of his father and travelling through the desert. They come across a few groups of adversaries (all of which Flashpoint Batman takes care of easily) on the way to their final destination. Bruce Wayne is still recovering from his battle with Bane and is mostly bound to horseback. While the issue is not complicated it does drop a fairly major revelation about Thomas Wayne’s plan near the end of the comic.

Tim’s Thoughts
After many complex and dense issues, this simple story comes at a perfect time. It is able to progress the story while still allowing for a brief pause. Tom King is able to balance the exposition and action in this comic expertly keeping the reader engaged and never bored. Batman rides through the desert with his alternate Earth father (who is also Batman) is a silly premise but everything is given the emotional weight needed here. It has also been a long time since anyone has seen Thomas Wayne in action (aside from the naked Bane fight) and it was great to see how well he fulfills the role of Batman here. When King finally reveals Thomas Wayne’s final plan it all comes together and makes sense. I cannot spoil anything for you here, but why he teamed up with Bane now comes into focus and no longer seems to be out of character.

Tom King’s strength is his synergy when working with some of the best artists at DC. Somehow he gets consistently paired with the best teams and he knows exactly how to lean on them and trust them to do some heavy lifting with his storytelling. Mikel Janin has been ½ the artist on the arc so far (Jorge Fornes has been splitting duties on each issue previous) but here he gets to pencil and ink the entire book. This is a beautiful book and Janin’s work is just breathtaking. The way he plays with layouts and goes from action to sparse silent moments is incredible. Having an entire comic set in a desert could have been boring but he takes the setting and uses it thematically in his art direction. Jordie Bellaire’s colors give a real warmth to the art and you can almost feel the heat radiating off the page. It is one of those books you could simply look at and not read a single word, and still understand what is going on.

Summary
For people finding the previous issues too cluttered, this issue is much slower pace. The storytelling here is top notch and where it is possibly going next is very exciting. Entering the final stretch of Tom King’s Batman run has been a fascinating read. This is easily the best issue of The Fall and the Fallen arc so far
Good
10
Perfect

Batman #73 Writer: Tom King Artist: Mikel Janin Colorist: Jordie Bellaire Letterer: Clayton Cowles The Fall and the Fallen has been an interesting story so far. Bane’s plan to break Batman is coming together, and the l...
0
Average User Rating
0 votes
Have Your Say!
Your Rating: 0
Submit
Write A Review