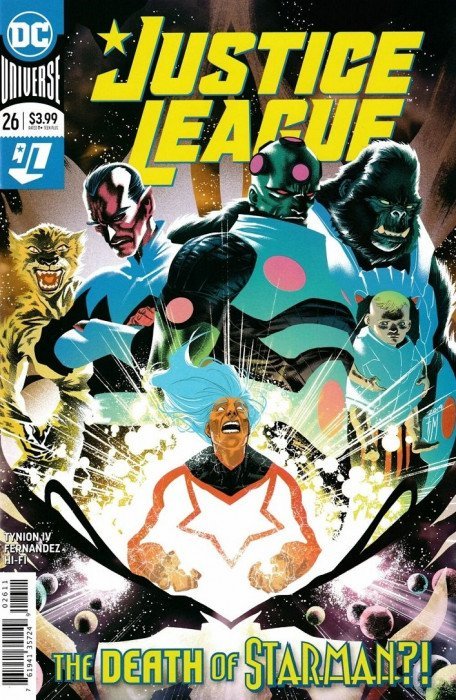 Justice League is now in an interesting spot, having just finished the excellent Sixth Dimension arc and now ramping up toward The Year of the Villain. This issue attempts to bridge the gap between the two storylines. The Justice League is now slightly larger with The World Forger joining their ranks, in order to save the multiverse and take on Perpetua. Lex Luthor is dead but his wealth and power live on in a mysterious cloaked figure. This person is acting like a twisted genie granting wishes by giving weapons to those that want to create chaos.

Story
This story deals with many smaller moving parts. Martian Manhunter is looking for the cloaked figure that is giving out weapons to desperate people. While the rest of the Justice League is focused elsewhere Martian Manhunter is the only one who seems concerned about this underground weapons dealer. It is all framed as a giant conspiracy and some doubt the cloaked figures existence at all. The World Forger is with the rest of the league at The House of Heroes trying to gather superheroes from across the multiverse to fight with them against Perpetua and the eventual destruction they face. Back at League headquarters Hawkgirl and Mera are using all their resources in order to find The Legion of Doom. Basically this story is just the start of a larger set up of what is to come.

Tim’s Thoughts
It seems that is James Tynion IV’s name is on the cover of a Justice League book it will most likely be a side story or a stop gap. This is not a slight against the writer at all as he has crafted some really interesting stories (and arguably wrote the best part of The Drowned Earth arc).His Legion of Doom “takeover comics” (where the title of the book is literally changed to Legion of Doom) are always a blast to read. This comic is far more of a “stop gap” than a side story, but Tynion IV manages to pack a lot in this short issue. His grasp of Martian Manhunter was really fun to read and not enough writers explore that he is a detective. While more than enough stories explore the “Martian” aspect of his character it was nice to see him become a “Manhunter.” It is a little strange that the League is not supportive of his investigation into the cloaked figure (he has proven plenty of times that his instinct is correct and has been a leader of the league). Regardless, his story which bookends to comic is a highlight of this issue. What is sandwiched in the middle of this comic is a lot more fragmented. The House of Heroes element is great, and I always welcome an appearance of Captain Carrot. We get an idea of what The World Forger’s plan is and it should lead to something truly epic. Hawkgirl’s quest to find the Legion of Doom also lead to some fun cameos, but it is the one part of the issue that doesn’t go anywhere as exciting as the rest. A minor problem overall as we still get some great character development from Hawkgirl and grasping her new status quo. It is clear that the Justice League acts as an event book as much as anything DC publishes that is marketed as such.

Javier Fernandez’s art is great here. While it is not the same level that the comic has had in the recent past, there is nothing particularly wrong with it. Everything looks great and he is able to keep things excited even in an issue as exposition heavy as this one. Kudos should also go toward the ability to juggle so many characters across teams and the multiverse and still make them all fit thematically into one comic. Nothing is a stand out here but there is also nothing to highly critique either.

Summary
This week’s Justice League is a great comic to pick up. Everything you need to know that is to come on the title is contained here. While this is a stop gap in the story so far, it does not completely go without moments of intrigue. In particular, if you are a Martian Manhunter fan this comic shows an understanding of the character that few have hit.
Good
Bad
9
Amazing