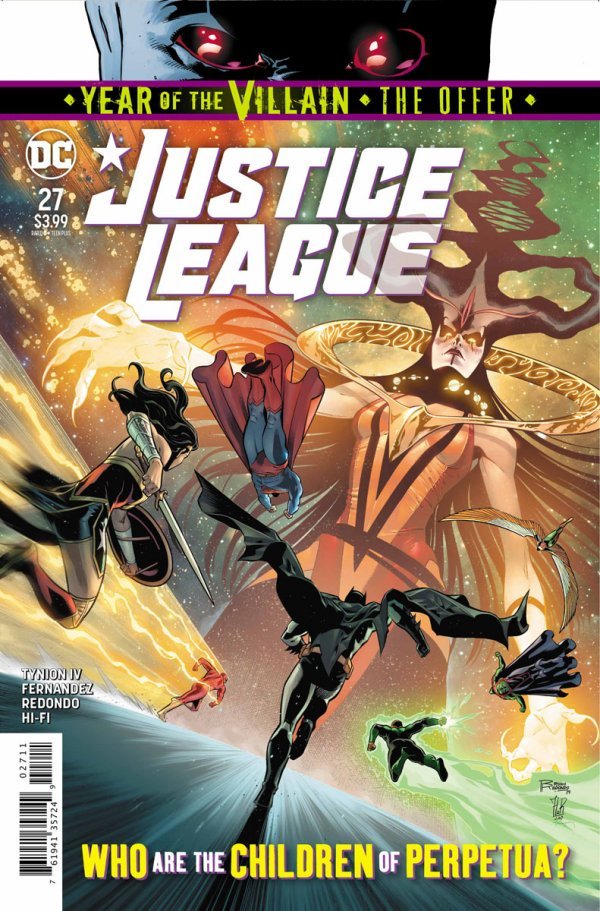 The last issue left in an interesting place, with the apparent return of Lex Luthor’s father. This figure has been important in recent developments in Martian Manhunter’s new continuity. It seems that as a child he was actually captive, and experimented on, on Earth. This was all done under the hand of Lex Luthor’s father, along with Vandal Savage. Lex Luthor as a child actually befriended a young Martian Manhunter, which has been connecting more and more to recent events of the comic. This issue brings that storyline more in focus, while the rest of the league gathers high powered allies for their eventual battle against Perpetua.

Story
The last issue ended on the bombshell that Alexander Luthor is still alive, and he was giving weapons to people in order to cause chaos. This thread is tied up in this single issue and leads to some twists and turns that can only be described as unexpected. Without getting into spoiler territory the plot here starts and ends in vastly different places. Martian Manhunter’s new origin is more important to the overall Justice League plot than ever. Not only has it been previously learned that Manhunter was on Earth as a child, but Perpetua created an Apex Species out of Martians. Both of these points are essential in the story and have some lasting impacts. The Justice League that is not on Earth, is on a mission to find the Monitor and the Anti-Monitor. This comic reintroduces The Monitor into Rebirth era DC and ties together things from Pre-Crisis (yes the original Crisis). The comic ends with new missions for both factions of the Justice League.

Tim’s Thoughts
There is a lot to this comic. So much happens in so few pages, and it was pretty refreshing to see Tynion IV allow himself to just move through his story. Things happen here that other writers would spend on an entire 3-6 issue arc. It is refreshing to see giant revelations be tossed aside quickly for bigger things to come. It really gives the sense of escalation and importance. Again, Tynion IV shows a deep understanding of what makes Martian Manhunter work and I love seeing him write the character. There is also a great scene Manhunter and Hawkgirl’s child, from another universe, and how he struggles with not being “real.” It was really cool to see Crisis on Infinite Earths being brought up and just fitting perfectly into the story. If you read the series there is a moment with Barry Allen that really hits hard in this comic. With a comic this dense it would be easy to get lost and confused, but the writing here just works and keeps things fairly straight forward. I have been saying that Justice League feels like an ongoing event comic, and I think it might be the best way to handle this series. Revelations, twists, turns, and new status quos are just par for the course in this series.

I know I sound like a broken record but it seems to be a problem on DC books.This is most likely due to the twice monthly shipping schedule of many titles, but it seems I rarely review a book with one art team. Both Javier Fernandez and Bruno Redondo are great artists but their work does not mesh well. And the comic doesn’t even have a thematic reason to jump from team to team. While there are two different plots in this book they still seem like parts of a whole, rather than separate entities. Having the book look different from page to page just lends to a messier looking book. And when you have a book as dense as this one, any variation like this only harms the narrative. I would rather wait for a book with a cohesive look than have a book that is a slight step back from what it could have been on time. Again, I have nothing but respect and admiration for the artists on this book but I don’t think they work well together.

Summary
The Justice League title remains one of the strongest DC books on the shelf. If you like big event books that are contained in a single series you cannot do any better. This is how a Justice League book should read. James Tynion IV and Scott Snyder are doing wonders on this series.
Good
Bad
9
Amazing

Fight with us. Save the Multiverse (Justice League 27 Comic review)