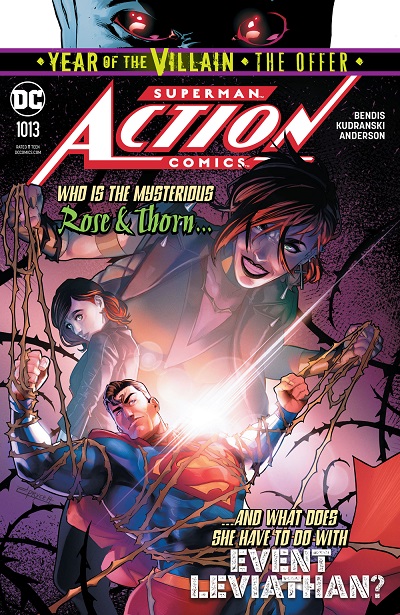 Last issue was a Robinson Goode-centric issue that focused on her pursuing a story involving a woman named Rose who has a split personality called Thorn. This week, she takes the story to Perry, while Clark returns to Metropolis and does some investigating of his own. I would also like to note that this story is a tie-in with the Leviathan event—reading Leviathan #2 isn’t necessary, but it will give you some context as to what Clark and Robinson are investigating.

This issue moved a lot faster and I appreciated that this time, it felt like we were given a bit more information. I also had the benefit of having read the second issue of Leviathan from last week, which put this information into a more understandable context. Rose describes her encounter with Leviathan to Robinson, and Clark digs deeper. Like most issues in Bendis’s run of Action, this focused on the dark underbelly of Metropolis, giving the story an almost neo-noir feel with a touch of the whimsical, given this is Superman, after all. The art in the issue was top notch—I love the realism of Kudranski’s style paired with Anderson’s vibrant colors. Both Campbell and Oliver’s covers were fantastic.

Bendis’s characterization of Clark and his interactions with ordinary citizens as Superman is one of the highlights of his style. He presents a powerful figure in Superman who is understandably revered by many, and even feared by criminals, but he always assures the people that he interacts with that they have no reason to fear him, and is always kind and polite, even to the criminals. Clark’s Superman persona is someone that he wants the world at large to be comfortable with—a friend—and Bendis’s Superman is certainly that.

I find Robinson to be a compelling character. She is young, ambitious, and very dedicated to her job as a city reporter. Perry is impressed with her skill, but also seems reluctant to give her too much responsibility too early. This frustrates her, understandably, and we see her stand up for herself in a scene in Perry’s office and convince him to publish her story. What I liked about it was it showed how proactive she is, but in making her case she not only refrained from denigrating Lois (whom she clearly respects and looks up to a great deal) in doing so, but praised her for her work on the Spyral story.

My one complaint with this issue, which is an overall complaint I have with this book in general, is that there is not nearly enough interaction between these two characters. I was certainly a skeptic about the original characters that Bendis was introducing, fearing that they would take the spotlight away from main characters such as Lois. That is happening here, and I think it hurts the story, because if anything, Robinson is a character who can mesh really well with Lois Lane. Time and time again, we get to see various characters meet their hero—Superman—and learn from him. I would love to see this happen with Robinson and Lois.

I am enjoying this arc so far, and am intrigued by Robinson’s story. We don’t know too much about her past, but the next issue promises to be quite revelatory on that front.

Summary
Robinson Goode continues her quest to make a name for herself and investigate Leviathan's schemes. Meanwhile, Clark Kent searches for clues on his own.
Good
Bad
9
Amazing
Art - 10
Story - 7
Characterization - 10

More Than a Game of Dress-Up (Adventures of the Super Sons #2 Comic Review)
September 9, 2018