What You Need to Know: Carol Danvers AKA Captain Marvel has proven herself to be one of Earths Mightiest Hero’s and a core member of the Avengers. Recently, Carol took on the role of the Kree Accuser and used the Universal Weapon to help save the Galaxy from ANOTHER Alien Invasion across the Galaxy. Along the way, she met Lauri-Ell, her half-sister, and together they realized that is was in fact Lauriel-Ell, not Carol, who was destined to become The True Accuser. Now that she is back in space as a warrior Guardian of the United Kree-Skrull Empire, Captain Marvel has returned to Earth. And it’s good timing because things are about to get weird. . .

In This Issue: Somewhere in Upstate New York, very late at night, Captain Marvel and War Machine are out on a mission that feels more like a date. Well except for the fact that Spider-Woman and Hazmat are on the date/mission with them. Carol reveals she has been reinstated into the Air Force and the two are planning to celebrate. That is, until they get a signal coming from an immense, unknown ship stuck in the trees. Captain Marvel flys up to investigate but before she can get there, the whole group is attacked by strange vines and Captain Marvel is suddenly transported to a different place and people she doesn’t know but seems to know her. Gerry Crew, a baby to Carol but now an adult, tells her that she is in 2052 Manhattan. Confirming this is not a dream, Emma Frost comes forward to try to calm Carol down and get the group out of sight before they are attacked by a real enemy. Unfortunately, a horde or Monsters shows up and Captain Marvel is more than happy to hit something. After she easily takes care of them, Carol is confronted with a Wall containing the names of “The Lost”, warriors who lost their lives in a great war. One of which is her boyfriend, War Machine. But thankfully Jessica Drew shows up to help fill in the blanks of what has happened, and it’s a lot of thanks to Captain Marvel’s future self that came to restart the Sun a year ago. But since then, they have found they are not alone on the surface and not all of them are friendly. Including the name OVE whom Emma believes is her young student Magik. The group is interrupted when a very much alive Luke Cage shows up with a message for Captain Marvel from OVE.

Ok, so if you didn’t get a chance to read “Captain Marvel: The End” you are going to be a little lost. I own the issue (it is only one issue thankfully) and it took me a good minute to remember what was going on. The short version is there was a huge war and Captain Marvel was off world when it happened and came back years later to help the survivors as a glowing goddess like being. Thankfully, Thompson writes in all the missing parts, so you aren’t too lost if you didn’t read it and remember it if you did read it. Seeing the aftermath of what happened is pretty clever and putting present Carol, who is happy and not so self loathly should be interesting. The range of emotion that goes through her in this issue isn’t uncommon but when it’s more about her relationship with War Machine (which as a romantic is nice to see more of) it’s understandable and more importantly well written. The art and style of the characters and introduced (or re-introduced) is stunning and I only wish there was a small glance at future Captain Marvel. But this is a really well done set up for a new story arch and the last page alone leaves you wanting more.

Summary
Captain Marvel can’t catch a break even when she is in a good mood. A new adventure is beginning for her but it turns out it’s an adventure she has already had. Or at least a future version of her has already had. Can she figure out who is behind bringing her to this strange new world and help her new/old friends? 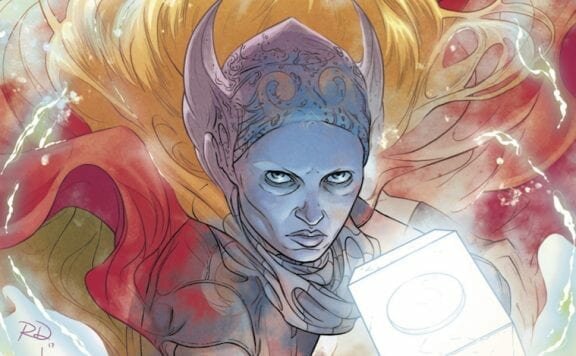